During this Grand Circle Loop overview of Red Rock Canyon, I will describe the major destinations in Red Rock Canyon and point out the surrounding wilderness areas, along with access routes to these areas, including:

And then, before you know it we’re back at the Red Rock Canyon Visitor Center, our starting point.

In addition, in the video, I describe my wilderness navigation strategy and gear for this type of terrain.

If you watch the video and take the Grand Circle Loop before visiting any of the destinations in Red Rock Canyon, you’ll have a big picture perspective along with how to travel light and stay safe as you go!

All the maps on this website are integrated with the Google Maps platform, so you can click on any map and get driving directions to any location on the site.

In short, you will take I-215 to the Charleston Blvd. Exit and head up Charleston Blvd. toward the mountains. You’re now on Hwy 159. After passing through the residential area, you will continue past the first turn-off on the right (Calico Basin) and take the second turn-off to the right which is Red Rock Canyon. Be sure to have a reservation if you will arrive at 8am or later.

The Grand Circle Loop Trailhead is located just to the left (West) of the Red Rock Canyon Visitor Center. You’ll need to park in the public parking area and then walk through the smaller employee and handicapped parking area. You’ll know when you have arrived at the trailhead because there is a large sign.

I take the loop in the clockwise direction. Traveling in this direction beginning at sunrise will result in every wilderness area you approach throughout your time on the Grand Circle Loop being brilliantly lit up by the sun.

Now, a more detailed description of destination points in Red Rock Canyon and surrounding wilderness areas you will see from The Grand Circle Loop:

Those brightly colored mountains along the West side of Red Rock Canyon actually form their own unique wilderness area: The Rainbow Mountain Wilderness. These Jurassic Era frozen sand dunes are calico colored. The reds are formed from iron leaching up from the soil while they were still sand dunes.

The Rainbow Mountains stretch from their Northern end in the Willow Spring area in Red Rock Canyon all the way to their Southern end at Highway 190 in the Mountain Springs area.

Some of the familiar peaks in the Rainbow Mountains along the West end of Red Rock Canyon are:

Just getting to the summit approaches involves navigating boulders, ledges and seemingly impenetrable walls of brush in the access canyons, three of which have trailheads located on the Red Rock Canyon Scenic Drive:

However, there is another, class 2 and 3 route to the summits of the Rainbow Mountain peaks that totally avoids the difficult canyons below and class 4, 5 and above cliff climbing…

The other, easier, class 2 & 3 path to the Rainbow Mountain summits is to summit them not from below, but from above, as strange at that may seem!

Ice Box Canyon lies between Buffalo Wall and Bridge Mountain. Though Ice Box Canyon is one of the most popular destinations on the Red Rock Canyon Scenic Drive, I have yet to explore that canyon as of the writing of this article. Will do this soon!

So, I’ll talk about canyon navigation here. As mentioned above, navigating the lower canyons in the Rainbow Mountains requires dealing with seemingly impenetrable walls of brush, along with large boulders and ledges. But there are additional considerations. When wet, the boulders and ledges become as slick as an ice-skating rink. Stay away from the canyons within 24-48 hours after the last rain. Then, there is the season: Summer can bring temperatures exceeding 110 degrees in the canyons and Winter can bring snow and ice in the upper canyons making the surface even slicker than after a rain storm.

This leaves the best seasons for these canyons as Fall and Spring, but these seasons also have considerations. In the Fall, those wall of brush are at their thickest and highest. And, no one has been helping create pathways through the brush during the hot Summer months. In the Spring, the creeks in the canyons are at their highest from Winter runoff from the mountains above. Take your pick. Fall and Spring are the best time of years for navigating the canyons.

Juniper Canyon lies between Juniper Peak and Rainbow Mountain. Like all the canyons in the lower Rainbow Mountains, Juniper Canyon can get a bit sketchy in the brush area. However, this does not prevent this access point to Juniper Peak from being the most popular with class 2-3 climbers. It can become a bit like an LA freeway on weekends in the Fall and Spring, and that final summit approach may be like the line-up at the DMV! On the good side, you’re never far from other climbers, which will help you stay on track!

Willow Spring, located between White Rock Mountain and the Northern tip of the Rainbow Mountains, is a well-developed picnic area with assess to a number of trailheads both easy and more difficult. There is even a well-signed interpretive trail for children. In addition, you will find Red Rock Canyon’s most diverse vegetation zone in and around the Willow Spring area.

Those cliffs you see on the North end of Red Rock Canyon are the Keystone Thrust Cliffs in the La Madre Mountains Wilderness. The easiest access to the upper cliff line is by way of La Madre Springs.

La Madre Springs is located on the Northeast area of White Rock Mountain. When you’re on the White Rock Mountain Loop, take the split-off to La Madre Spring. The springs flow year-round, but Spring is the best season to visit. Above the springs there is an old miner’s cabin. Behind the cabin is the easiest access point to summit the Keystone Thrust from Red Rock Canyon.

I’ve mentioned the easiest access point to summit the Keystone Thrust from Red Rock Canyon. There are some other, more difficult access points:

From the Sandstone Quarry area, take the Turtlehead Peak trail past the Calico Tanks trail split, over a ridge and back down into the main wash you have already crossed once. Only this time, instead of crossing the wash to continue on the Turtlehead Peak trail, head up the wash. In a mile or two the wash will split. Take the right split which leads you over into the upper Calico/Brownstone Basin. Head for the saddle (notch) between El Padre Mountain on the left (West) and La Madre Mountain on the right (East). Continue find your way to the upper Keystone Thrust cliffs between El Padre and La Madre Mountains.

Take some time to visit the historic quarry area where 10-ton (20,000lb) sand stone blocks were quarried from the white rock hillside to be used for construction. The quarry was in operation from 1905-1912 when it was no longer cost effective to transport the blocks. Quite a few blocks remain as well as the area they were quarried.

The two main trailheads from the Sandstone Quarry are:

As mentioned above, this summit has one of the most spectacular views of Red Rock Canyon and its surrounding areas. To get a better view you would need to be on the Keystone Thrust cliffs, on a summit in the Rainbow Mountains or on The Rainbow Mountains Upper Crest Ridgeline. Those alternate spectacular views will require much longer distances (10-20 mile round trips) and some difficult navigation. Turtlehead Peak gives a spectacular view in a short 5-mile round trip. If you get lost on this sometimes sketchy trail, just stay above the Northern base of the main wash heading for the saddle at the top of the wash on the way up or for the lower opening on the way down. You’ll reconnect with the trail as long as you keep this big picture navigation in mind. The sight of other hikers on this popular trail will also help keep you on track.

Take this trail to it’s upper end on your first visit there, noting alternate routes to the right and the left. On your second visit you can be more creative, making additional discoveries on the alternate routes.

There are many cross-over points from Red Rock Canyon to the neighboring Calico/Brownstone Basins. Here are seven:

Petroglyphs on the Grand Circle Loop

Petroglyphs make their appearance on the Grand Circle Loop at a large boulder about mid-way down the Calico Hills section. The only indication that there are petroglyphs here is a warning sign that basically says, “Don’t deface history”. That warning caused me to take a closer look at a large more horizontal slab at the base of the boulder. There were quite a collection of petroglyphs in the area which are shown in the video and slideshow on this page. To learn more about Southern Nevada petroglyphs and their meaning view the 74-page Master of Arts Degree in Archaeology thesis “Valley of Fire Petroglyphs: A New Perspective On An Old Idea” by Eric Pacl. Further exploration in the Calico Hills and other red rock formations in Red Rock Canyon would certainly reveal more petroglyphs. Willow Spring is another area with petroglyphs in Red Rock Canyon.

You’ll find this unmarked route originating from the Red Springs Desert Oasis parking area. If you look carefully at the calico hills from the parking area you’ll see a diagonal line from the low point (South) at the Red Springs Desert Oasis to a high point (North) at the summit of the Calico Hills. Take a pair of binoculars with you the the parking area and watch for people ascending and descending the Grand Staircase route in order to be more certain about the pathway.  There are no trails and a lot of scrambling over boulders, but it’s fun!

This is a loop that circles the base of the lower Calico Hills. It’s easier to stay on course and find the upper cross-over point if you begin at Red Springs Desert Oasis and take the loop in a counterclockwise direction. On the Red Rock Canyon side of the Calico Hills you’ll find yourself on the Red Rock Canyon Grand Circle trail. Follow the pathway up around the Southern base of the Calico Hills to find yourself back at Red Springs Desert Oasis.

In this adventure video on this page I take time to give my best wisdom for desert navigation including route choices, things to avoid, assessing the weather and water flow and simple but essential gear. 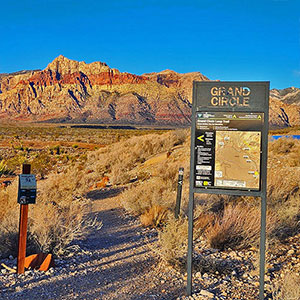