Sisters North, located in Lee Canyon in the Mt. Charleston Wilderness is on a ridge system including Sisters South, Sisters North and Black Rock Sister. The ridge offers incredible 360 degree views with McFarland Peak, Bonanza Peak and Macks Peak to the West, the Sheep Range and Gass Peak to the North, Angel Peak, Mummy Mountain, the North Ridge of Kyle Canyon, Lee Peak and Charleston Peak to the East. There are far more reference points in the distance beyond, but these are the most obvious. A huge rock arch unexpectedly appears near the summit of the approach ridge along with the remarkable rock sculpture of Black Rock Sister.

The wilderness has a bright, radiant feeling of being untouched. There are no established, marked trails so you often have the feeling of being the only person to have ever stood there. In fact, it is likely you will have the entire wilderness to yourself during this adventure. As you rise in elevation you find yourself in a spectacular bristlecone pine zone with ancient pine sculptures in countless unique and beautiful shapes.

There are basically two main parallel approach routes if you want to avoid steep avalanche slopes…at least until the final summit approach to Sister’s North: One is a fairly distinct trail through a wash and the other is on the ridge above the North side of the wash. I prefer the ridge route as an approach route due to the spectacular view that progressively unfolds around you ascend. The trail in the wash below is a great descent route being a welcome restful experience after the avalanche slopes you encountered near Sisters North summit, and it’s easier to stay on course while descending.

The summit approach I took on this day was up the North side of Sisters North. The final quarter mile is a very steep avalanche slope similar to the final approach up the Northeastern cliffs of Mummy Mountain, though not as long. There is nothing beyond class 3. However, even a slightly steeper incline could quickly put you into the class 4 zone. For this non-climber, it was just a matter of taking time to secure every foothold and hand hold. With a little familiarity this stretch could quickly become less daunting.

The best time of year for this adventure is June through September when the temperatures are normally in the welcome 70-80 degree range as opposed to much hotter temperatures in the lower elevations. You are likely to encounter snow during the late Fall to early Spring months.

Locating the Approach Wash and Ridge

From the parking area head up Lee Canyon Road a brief 150 feet, then cross the road and head up the first gully wash to the right (West). You want to ascend the ridge on the North (right) side of the wash very soon. I chose to ascend that ridge where the wash divided into 2 branches. Alternately, you could continue up the wash, finding a nice little trail. However, you’re sacrificing the spectacular views you’ll experience on the ridge.

If you choose to ascend the ridge above the wash, just stay right on the middle of the ridge all the way to where it summits at the saddle near the base of Sisters North. The ridge is fairly wide open, though you will find yourself often weaving around brush and trees. You won’t need to whack anything as there is always an open route through the vegetation. The great thing about ascending the ridge is that you can see your destination throughout the ascent. Just stay in the center of the ridge and you’ll easily make it to the upper saddle without a single avalanche slope.

Take time to view the spectacular rock arch near the summit of the ridge, along with emerging views of Black Rock Sister.

At the summit of the ridge turn right for a quick 100 yard out and back to explore Black Rock Sister before heading toward Sisters North.

From the saddle, the final summit approach to Sisters North looks quite daunting. It looks as if you will certainly end up scaling vertical cliffs just below the summit. However, there is a class 3 route that skirts the right (West) edge of the cliffs through a forested section all the way to the summit. To help you, as the ascent begins to increase at the base of the saddle below Sisters North a trail will appear. Just follow the trail. When you reach the first huge rocky section, circle around the right (West) edge, then hug the base of the rock wall where you will find firmer foot and hand holds as you continue your ascent.

Descent from Sisters North Back to Lee Canyon Road

On this day, instead of heading toward Sisters South, I returned down Sisters North by the same Northern summit approach slope I had just ascended. Once back down on the saddle, I began to descend the ridge to the East (right) I had earlier ascended. When I reached the arch, I navigated downward to the wash below the ridge. There was a faint trail heading toward the wash and I was curious where it might lead. On an earlier trip to Black Rock Sister I had stayed on the ridge, but mistakenly took a Southeastern (slight left) split that landed me on some steep avalanche slopes.

The faint trail remained distinct enough down the wash and all the way back to Lee Canyon Road, even featuring cairn markers along the way. That wash trail was a welcome rest in light of the earlier steep final approach stretch to Sisters North. And, the trail landed on Lee Canyon Road just 150 feet from my car. The wash trail basically ran parallel to the ridge above and to the North (left) side of the wash — the same ridge I had taken on my ascent route. 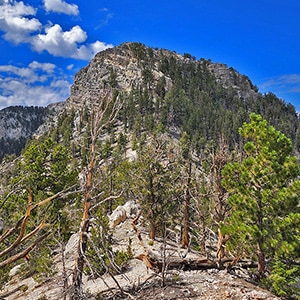