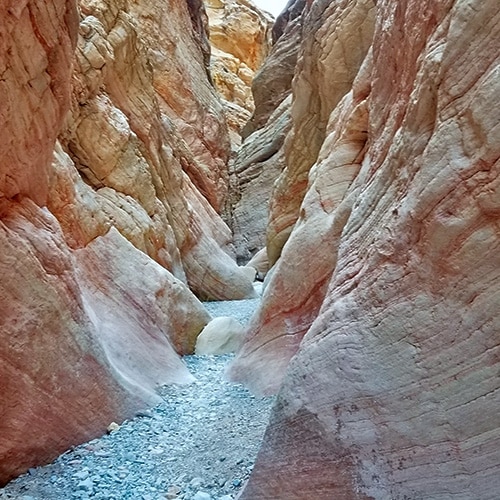 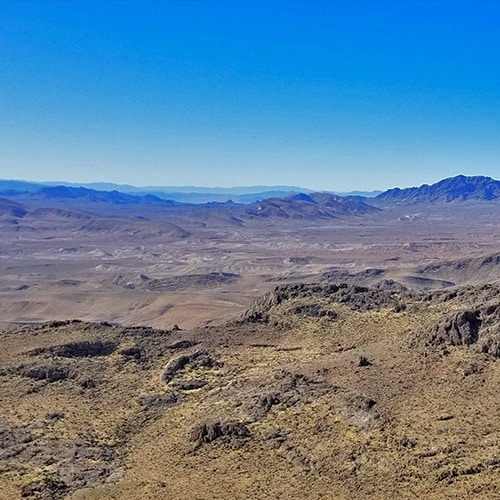 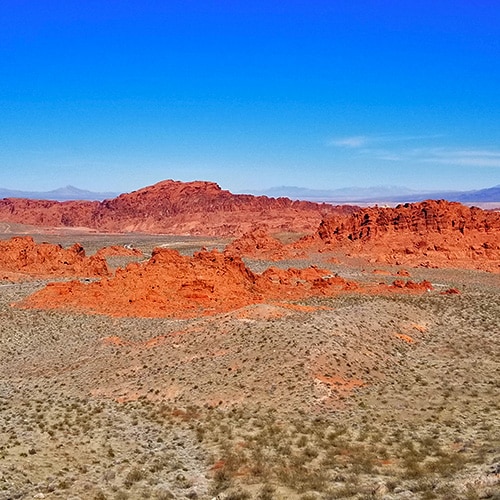 Discovering the Muddy Mountains Wilderness was, as in the words of the famous New York Yankees coach, Yogi Berra, “deja vu all over again”. It recalled my discovery of The La Madre Mountains Wilderness a couple years ago. While sitting on the summit of Turtlehead Peak my gaze turned to the cliffs at the back of Red Rock National Conservation Area and I began to wonder what was up there and what it might be like to stand on that place. So I did a bit of research and found that those cliffs were a part of a fault system called The Keystone Thrust fault system, and were actually the beginning of a largely untouched wilderness area 4 times the size of Red Rock Park (10,000 acres) – The La Madre Mountains Wilderness (40,000 acres)! And this, within about 45 minutes drive of the Las Vegas Strip. However, prepare to explore the area either by 4-wheel drive or more thoroughly on foot.

Fast forward to the Winter of 2020 when I’m standing at the Old Arrowhead Trailhead in Valley of Fire State Park in Nevada and looking at the ridge system that forms the park’s Southern border. Again I wondered what was up there and what it might be like to run along the top of that ridge system. It seemed that there would be amazing aerial views of both Valley of Fire State Park and Lake Mead National Park, all at once. So, I did some research and found that that ridge system was part of the same Keystone Thrust fault system that also existed in Red Rock National Park as the border of The La Madre Mountains Wilderness. And yes, this ridge system was also the boarder of a largely untouched wilderness area called The Muddy Mountains Wilderness. But in this case the size of the wilderness area was an astronomical 185,000 acres!! That’s about 1/3rd the size of the State of Rhode Island! And this, within one hour’s drive of the Las Vegas Strip. However, again prepare to explore the area either via 4-wheel drive of more thoroughly on foot.

Deja Vu All Over Again!

What are the chances we could experience this “deja vu all over again” twice: Major popular destination park, bordered by the Keystone Thrust fault system which formed the beginning of a largely untouched and hard to access wilderness area many times the size of the park, and all within 45 minutes to one hour of the Las Vegas Strip? Yet these two instances of the Keystone Thrust Fault System are about an hour and a half drive apart (approximately 60-70 miles).

But here we are, and we have some exploring ahead of us!

By the way, assuming that there are more unknown, untouched wilderness areas around Las Vegas and around the U.S., I did some more research and found this interactive map of all the wilderness areas in the country!

On this page I’ve placed a video of my first major adventure in the Muddy Mountains Wilderness of Nevada. And, below an interpretive display from the Valley of Fire State Park, Nevada visitor center describing the formation of the Keystone Thrust and the Muddy Mountains.

The mountains across the Southern boundary of Valley of Fire State Park in Nevada (above) are evidence of a major movement of the earth’s crust. During the Paleozoic Era, an oceanic place** slid eastward beneath the western edge of North America along the coast of California. The resulting compression in western North America caused thin slabs of gray Paleozoic rocks to be shoved many miles eastward, over the younger red Mesozoic rocks.

This Muddy Mountain Thrust Fault,** shown above in cross­-section, reveals the reaction of local geologic deposits to the powerful pressure placed at the edge of the continent hundreds of miles to the west. Geologists now know this thrust is a continuation of the Keystone Thrust exposed in the Red Rock Canyon area west of Las Vegas.

The Muddy Mountain Thrust is a very complex fault. In some places in the Valley of Fire it is nearly horizontal, while elsewhere it is almost vertical. Across the valley you see gray dolomite in contact with red sandstone. This high-angle contact, a nearly vertical segment of the Muddy Mountain Thrust, is sometimes called the Arrowhead Fault. **

All Muddy Mountains High Points From: 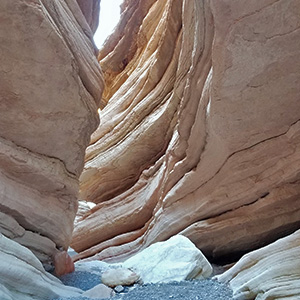