Mummy Mountain Eastern approach is a fascinating journey including well established trails, traverse across largely untouched wilderness area, ascent up steep avalanche slopes, traverse along the edge of cliffs along with a brief ascent up a 10ft vertical rock wall with a 100ft drop-off below. This trail runner has not previously encountered a mountain adventure with this particular combination of challenges. The entire journey beginning at the North Loop Trailhead in the Mt. Charleston Wilderness, ascent of the East side of Mummy Mountain, descent on the West side of Mummy Mountain and return to the North Loop trailhead took about 5 and a half hours after subtracting time to film the experience, a rest stop just below the summit of Mummy Mountain and a conversation with other climbers at the summit.

Getting to the North Loop Trailhead

See the driving directions on the Fletcher Peak page of this website.

From the North Loop Trailhead to Rain Tree

Beginning at the North Loop Trailhead, take the North Loop Trail up past a beautiful plateau that offers a great view of the entire East side of Mummy Mountain and your route to the summit. Continue up beyond the plateau up a series of 14 switchbacks. At the top of the switchbacks there will be a faint trail that splits off to the right and rides the top of a ridge. This deviation provides more great views of the East side of Mummy Mountain along with Gass Peak, La Madre Mountain Fletcher Peak and Griffith Peak to the West and South. Descend back to the North Loop trailhead, pass the Fletcher Peak approach trail and on down to Rain Tree, a majestic ancient 3000-year-old Bristlecone pine tree.

From Rain Tree to Mummy Springs and Departing the Trail

Take a right at Rain Tree toward Mummy Springs, which contain a water flow year-round. Continue across the bottom of Mummy Springs to where the trail takes its first switchback. Just a few feet after rounding that switchback, leave the trail and head up and diagonally to the right through largely untouched wilderness towards the base of the ridge.

Take the left wash which begins for a few hundred feet as a relatively gentle slope but soon turns into a steep avalanche slope. The video will actually show me ascending the middle wash and then traversing about a quarter mile to the left at the base of the final Eastern cliff of Mummy Mountain. Taking the left wash should shorten your trip a bit.

At the top of the left wash enter the opening of the narrow canyon summit approach to Mummy mountain. This is the most popular Eastern approach route. On the other hand, if you took the wash to the right of the delta of 3 washes, you could summit the Eastern side of Mummy Mountain along the right side of that widest wash. But, back to the left wash, ascend the avalanche slope summit approach canyon staying to the left of that narrow canyon.

You’ll eventually be faced by a cliff wall making it necessary to turn right along the base of that cliff. After a couple hundred feet you have only one choice: Ascend a 10ft vertical rock wall with exposure to a 100ft drop immediately below. The foot holds and hand holds are pretty narrow! This is pretty scary for a trail runner, probably no problem for a seasoned climber. Turn right after ascending that rock wall and continue another 1-200ft on a relatively wide ledge along the base of the cliff.

Make a pretty easy ascent to the wider ledge along the base of the upper cliff just below the summit of Mummy Mountain. It’s relatively easy going after this point. This is a good place to rest and collect yourself from the harrowing experience you just had ascending steep avalanche slopes, a narrow canyon and that scary 10ft vertical rock wall!

Now you can continue along the ledge and where the cliff ends, take a sharp left and continue up to the summit of Mummy Mountain. You made it! Congratulations!

North Loop Trail to the Junction with the Trail Canyon Trail

Circling the West Side of Mummy Mountain Back to Rain Tree

Take a left here and continue to circle Mummy Mountain along the North Loop Trail to Rain Tree (this section of trail from the junction to Rain Tree took me about 30 minutes.)

Descending from Rain Tree Back to the North Loop Trailhead

From Rain Tree descend back to the North Loop Trailhead. You made it! Why did I choose not to descend Mummy Mountain summit on the East side? Between cliffs, avalanche slopes and wilderness traverses, that route would be much more tedious, potentially twice and long and a lot scarier! Back at the North Loop Trailhead celebrate a great accomplishment that few people have achieved!

Initial Exploration of Summit Approach Up From Mummy Springs

Headed up from Mummy Springs through a series of steeper and steeper switchbacks until I was switchbacking up an avalanche hill. Turned to the right 3/4th of the way from the top. Over a ridge, then up the back side of that ridge. As it was questionable whether I could make it across the Eastern side of Mummy Mountain to the summit approach from that location, I ascended the ridge to my left up a rather steep chute to Mummy’s knees. Then back down the avalanche slope to Mummy Springs and then the North Loop trailhead. Next time I’ll try turning to the right after ascending the rocky section (see slides) about 1/3rd of the way up from Mummy Springs. 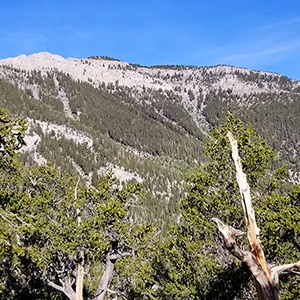