More Accurate Listing of Major Peaks in the Rainbow Mountains

In the video of my first adventure on the Southern ridgeline, I was encountering the Rainbow Mountain peaks below and attempting to number and identify them. Here is a more definitive description of the peaks following my later research. The peak numbers match the numbers in the video, but here are the names and position of the peaks from South to North, beginning from the Mountain Springs Trailhead:

There are additional peaks below the ridgeline, but these (above) are some of the main peaks. Over time, I’ll attempt to summit them all from the ridgeline.

Most people who ascend the peaks of The Rainbow Mountain Wilderness do so from the base of the peaks in Red Rock NCA.

Summary Assessment of the Ridgeline

There are actually 3 approaches to The Rainbow Mountains Upper Crest Ridgeline:

Getting to Mountain Springs Trailhead

Take I-215 to the Charleston Blvd. Exit in Summerlin, then head upward toward Red Rock Park. Pass Red Rock Park, continuing on Hwy 159. Pass the town of Blue Diamond, then turn right onto Hwy 160 toward Pahrump. Hwy 160 will ascend upward to a high point just before the town of Mountain Springs. Around that high point park at the Mountain Springs Trailhead on your right. The trailhead has no marking and is a hard right turn off Hwy 160 onto a dirt road and into an area that looks like an unimproved campground with scattered areas to park. If you are the first to arrive in the morning it’s not obvious that you are at a trailhead. To make the Mountain Springs trailhead even more difficult to recognize there is a large sign at the entrance “Residential Use Only – Dead End”. Pretty inviting!

Once you have successfully located the Mountain Springs Trailhead, your next challenge is to locate the unmarked trail to the Rainbow Mountains Upper Crest Ridgeline. The key now is the communications tower about 1/4th mile up the hill to the North from the parking area. The trail to the Rainbow Mountains South Upper Crest Ridgeline begins behind the communication tower.

2 Unpaved Road Approaches to the Trail Behind the Communication Tower

There are 2 unpaved roads heading North to the communication tower from the Mountain Springs Trailhead area:

Navigating From the Communication Tower to the South Ridgeline

Once you reach the communication tower, ascending to the upper ridgeline involves continuing around the gate at the tower to find the true beginning of the very good trail behind the tower. Now your point of reference is the ridgeline you see to your right (Northeast). The trail will rise to the top of that ridgeline and continue above the rainbow mountains to the large break between peak #5 and Mt. Wilson. Yes, it’s a large break, but not impossible to navigate in a future adventure.

When I summited the ridgeline I first took a quick deviation South to the highest point on the very Southern end of the ridgeline. From this point one can descend to Peak #1 (Hollow Peak?), the Southernmost peak in the Rainbow Mountains. Peak #1 is more a spur from the ridgeline than a distinct peak, though from below it looks more like a peak. The descent to the summit of Peak #1 looked easy enough and will make a great future adventure.

Retracing my way to the point where I had summited the ridgeline I continued North. The ridgeline rose to another high point where there was a distinct right split-off trail to the right, marked by a cairn. This is the trail to Windy Peak, Peak #2. Windy Peak is perhaps the most popular peak off the Southern ridgeline. That adventure is already documented.

Global Peak: Very Steep, at the Base of Windy Peak

Once past Windy Peak, I looked back and noticed a steep peak midway up the Northeastern base of Windy Peak. Global is pretty vertical. Unless you’re an experienced rock climber you might consider it to be “Impossible Peak”.

Black Velvet Peak, from above, looks composed of white rock and looks approachable. However, there are a few potential vertical barriers before the Eastern edge of the peak. We’ll scope that out in its own future adventure. The views would be incredible, the traverse somewhat challenging and the trip well worth it.

Mountain Spring Peak is a deviation right (East) above the main trail and it affords a spectacular 360 degree view of the entire region including the ridgeline, Potosi Mountain, Las Vegas, Lake Mead and beyond, the La Madre Mountains Wilderness, Red Rock Canyon National Conservation Area, the Mt. Charleston Wilderness, Lovell Canyon and many more points of interest. Of course, on this morning when I summited Mountain Spring Peak it was too hazy to see all of this, but I did catch these points of interest along the ridgeline on the return trip. There is a summit box on Mountain Spring Peak. The summit box did not indicate the identity of the peak, which I discovered by later research.

Beyond Mountain Spring Peak the Ridgeline trail again sharply descends around 300ft, then rapidly ascends again. Along the upper length of the trail after the ascent there are some spectacular rock formations framing views to the East along with views of Hidden Peak and Monument Peak. As the main trail begins to take a sharp right and plunge downward toward Hidden Peak, one can see a spur in the ridge that continues on North for about 1/2 mile before the ridge appears to end with a large gap before rising again around Indecision Peak and Mt. Wilson.

I continued on the main trail, taking the hard right plunge to Hidden Peak. Hidden Peak is distinctive, calico (red/white rock) and a true adventure in itself. The trail ended where the rock began, but there were a series of cairns that tended to appear and disappear at times. The key to Hidden Peak is when you hit the rock, head Southeast along the edge of an obvious huge drop-off. Soon you’re angling South toward another large drop-off. You can see the peak to the Southeast and a saddle just West of the peak that provides a route to the summit. Head for that saddle and final summit approach. As you’re heading South, when you reach the great drop-off cliff, take a left (East) down to the base of the saddle.

Beyond the saddle there is an incline ridge leading toward the summit. You can take a route on the right (South) or left (North) side of the ridge, although it appears the North route is the most distinct. Cairns can be seen on both the North and South routes. I continued a bit further along the North route until I hit a brief class 4 section near the summit. You’ll likely make it all the way to the summit on your first trip! I believe with a little creativity I can locate a class 3 approach all the way to the summit. I’ll return when there is more time and create a more detailed description of Hidden Peak’s summit route. 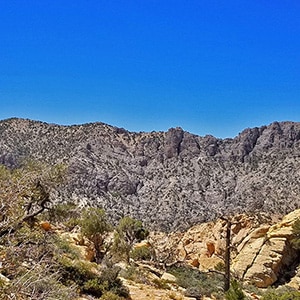