To enter the Northwestern corner of the Muddy Mountains Wilderness I use the Old Arrowhead Trailhead parking area in Valley of Fire State Park, located just about 1/2 mile within the park’s Western entrance.

Many of the landmarks in the Muddy Mountains Wilderness have no names, so I’ll try to describe locations by sight. Along the way, frequently be looking back at landmarks (ridge openings, passage ways) that will guide you on your return trip as there are no trails. The goal is to know the entire terrain as if it were your own backyard. We’re used to walking linear trails and traveling in a one-dimensional hiking world. Get into a three-dimensional perspective now that you’re in an untracked wilderness. Look all around and take in and memorize everything. It’s really liberating and also the safest way to traverse a wilderness area and find your way back out. Know that the entire terrain will look different on your return trip, and it’s easy to head down the wrong valley or ridge!

While standing at the Old Arrowhead Trailhead, look up at the Muddy Mountains (the large ridge system that forms the Southern border of Valley of Fire State Park). You’ll see an opening slightly to your left at the top of the ridge system (shown in the slide show on this page). Ascend through this opening. On the way up, as the angle of ascent becomes steeper and the rocks looser, you’ll receive help from the bighorn sheep who have created paths along the side of the mountain. It’s a pretty awesome experience to realize you’re walking on trails that were created by bighorn sheep – trails few humans have traversed.

Ascending through the opening in the cliffs is not too difficult, but tread lightly because there’s a lot of loose rock up there. I try not to put my entire weight on any one rock unless it looks totally secure. Ascending through the opening in the cliffs you’ll reach a small plateau. Head up to your left (East) to the first high point for a great panorama of Valley of Fire State Park, Nevada.

Now, continue to the opening in the next ridge to the South. Stay high, circling around the upper right (West) end of the area between the first ridge you are on and the next ridge to the South. You’ll see an opening to the summit of this second ridge. As you ascend over the top of the second ridge a huge, beautiful valley opens up. At the top of this second ridge I took a left and headed up to the highest point to the East on that ridge. Here is another great panorama viewpoint.

Descend through the valley to the third ridge, again circling to the right and along the top of the intervening valley. You’re heading for an opening in the third ridge. Along the way look down the valley to see the Eastern end of Valley of Fire State Park framed by the two ridges. You can see the Seven Sisters rock formations in Valley of Fire State Park and the Aztec red rock formations that form the border between Valley of Fire Wash and Fire Canyon. At the Eastern end of the red rock hills is Elephant Rock Loop and the Charlie’s Spring area.

Once you ascend the third ridge system in the Muddy Mountains, turn right (West) and head for the highest point. This is where I took the great panorama video and slides on this page. I believe some of the darker rocks on this third ridge may be an ancient sea floor. There are bands of brown stones in the rocks on the third ridge, and it’s all reminiscent of the kinds of rocks I saw on Fossil Ridge in the Sheep Mountain Range.

As you’re viewing the landscape of the Muddy Mountains Wilderness, note the high points so you can make plans to ascend each of these. For example, there’s a pretty distinctive ridge toward the Overton Arm of Lake Mead (West and East Longwell Ridge?). That may potentially be accessed from Northshore Road in Lake Mead National Recreation Area at the intersection of Echo Bay Road – a future adventure. There’s a sketchy map of the Muddy Mountains Wilderness area on the Lake Mead National Recreation Area Overview page – click on the Overton Arm map. To the South is another high point, Bitter Ridge, which would be accessed by what looks like a 10-mile run (or 4WD trip on the Back Country Byway-if 4WDs are allowed there) at the 25.5 mile marker on Northshore Road. This is about as specific as I can get after just one incursion into this wilderness area that is 1/3rd the size of the State of Rhode Island! 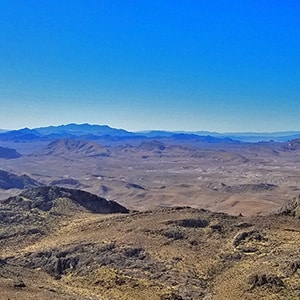