White Domes Loop Trail in Valley of Fire State Park, Nevada is a relatively easy but totally amazing 1-mile loop trail featuring colorful red Aztec sandstone that was originally sand dunes 200 million years ago in the Jurassic age of the dinosaurs. The dunes froze over time and iron deposits leached up from the ground creating the red coloring. In the meantime oxidation occurred on the surface creating a darker covering which native American artists used to create their petroglyphs, though I did not find any petroglyphs on the White Domes Loop Trail. Along with the red, there are white rock formations created from frozen sand dunes that were not affected by the leaching of iron. The rocks are formed into a myriad of wonderful shapes by the process of water erosion, fracturing of the earth and the sand-blasting of the wind over the ages. Another feature of the loop is an abandoned Hollywood set from the 1966 American western film “The Professionals“.

Take the White Domes Loop Trail in Valley of Fire State Park, Nevada in a counterclockwise direction around the loop. You’ll immediately ascend a small gradual hill with huge white and red sandstone hills on either side. The surface is deep white sand. Then you descend a series of flat sandy steps. Take it carefully as sand on flat rocks can create a slick surface. However, with care the descent is not a problem. Just don’t try this in high heels or dress shoes!

Once at the bottom of the hill the trail levels off through the rear of the loop. Just before rounding the first bend in the loop you’ll find the Hollywood set mentioned above. Pass that display to enter into a straight narrow slot canyon with high cliff walls on either side.

After passing through the slot canyon the trail loops around again to the right. At this point, to your left, you will see the trailhead to the 5.5-mile Prospect Trail. However, continue around the White Domes Loop which will begin to rise and finally loop around back to the main parking area. 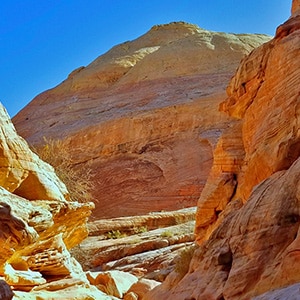