Video Coming When Summit Achieved Via This Route

Lee Peak summit from Lee Canyon is an adventure I explored a bit in late Summer of 2019. I’ll return to make the Lee Peak from Lee Canyon summit in the Summer of 2020. I first became curious about this approach when I discovered a weather station only about 200ft from the upper North Loop Trail. I was at that time traveling the direct approach along the top of the North Ridge of Kyle Canyon from the upper North Loop Trail to Mummy Mountain. Mistaking the weather station for an abandoned ski lift tower I thought this might be an indication that this was at one time the top of a ski run that descended to the Lee Canyon ski area, and thus a potential route from Lee Canyon to Lee Peak.

Locating the Weather Station on the North Ridge of Kyle Canyon

Where is the weather station on the North Ridge of Kyle Canyon? If you’re descending the upper North Loop Trail from Lee Peak you’ll first encounter a series of steep switchbacks. Following that there is a one-mile stretch where the trail gently rises and falls, then levels out for about 1/2 mile before reaching a small plateau overlook of Kyle Canyon then descending toward the base of Mummy Mountain. At that point just about 1/8th mile before the plateau where trail descends toward Mummy Mountain take a left off the trail about 100ft to reach the top of the North Ridge of Kyle Canyon.

I have not yet done a top-down exploration from the weather station, but will attempt that during an upcoming Summer. I have viewed the area both from Lee Peak, Mummy Mountain summit and from below in Lee Canyon. It looks as though there is a ridge that descends diagonally from the ski tower location in an Eastern direction to the base of Lee Canyon, and that this is the likely route between Lee Canyon and Lee Peak. The ridge itself, unlike a wash, may likely be relatively free of boulders, brush and obstacles, and there may even be an old trail there since it appears to be a fairly natural, gradual approach to the top of the North Ridge of Kyle Canyon. Once you reach the abandoned ski lift tower from Lee Canyon it will be a simple route to take the upper North Loop Trail to the top of Lee Peak.

I’ve attempted another approach from Lee Canyon to Lee Peak that appears to ascend more directly up Lee Canyon following the main ski run then continuing upward (see the videos on this page). That approach does not look as good since once you reach the top of the ski run you enter in a boulder and brush-clogged wash, and it appears there might be some more vertical stretches near the top. On the other hand the ridge mentioned above appears more gradual.

Adventure to occur during an upcoming Fall season. Lee Peak is often missed by those taking the North Loop Trail to Charleston Peak Summit. This is unfortunate because Lee Peak is only a fairly easy 1/8th mile deviation from the North Loop trail, and affords some unique and expansive views of Lee Canyon, Kyle Canyon, Charleston Peak, Mummy Mountain, Griffith Peak, Harris Mountain, Fletcher Peak, Cockscomb Ridge and Cathedral Rock along with additional wilderness views to the West unavailable from any other point.

Take I-95 North from Las Vegas for about 20 miles. Turn left at the Mt. Charleston/Kyle Canyon exit and precede up Hwy 157 for about 18 miles. After passing Mt. Charleston Resort, turn right onto Hwy 158 toward Lee Canyon. Take a left on Hwy 156 to Lee Canyon. Here you will find a number of trails including the Upper and Lower Bristlecone Pine trails, Bonanza Trail, Forest Trail 047 and the Lee Canyon Ski area which is the starting point for this adventure.

Route for the Lee Peak Summit Approach from Lee Canyon

This adventure involves starting at the bottom of the Lee Canyon Ski Lift and following the ski lift route as far as possible. I do not believe there is an official trail for a Lee Peak summit approach from Lee Canyon. I understand that the Lee Canyon side just below Lee Peak is an impassible cliff–at least to those of us who are not rock climbers. It will be necessary to skirt this cliff to the left and in order to make the summit of Lee Peak.

Since first discovering the weather station I have conducted a number of adventures from Lee to Kyle Canyon and begun to document approach routes to the Lee/Kyle Canyon upper rim from the base of Lee Canyon. These are now documented on the Lee Canyon adventure pages of this website. 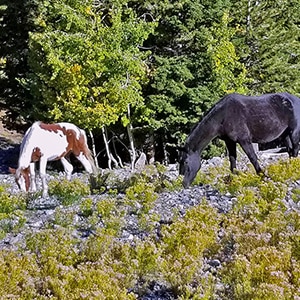 Article Name
Lee Peak from Lee Canyon | Mt Charleston Wilderness | Spring Mountains, Nevada
Description
This adventure in process will work out the most direct route possible from to Lee Peak from Lee Canyon. View the initial exploration which begins at the Upper Bristlecone Pine Trailhead. There's a surprise appearance of wild horses in one of the ski runs.
Author
David Smith
Publisher Name
LasVegasAreaTrails.com
Publisher Logo