Many 4WD tours into the Sheep Range stop half way through Yucca Pass to briefly explore Fossil Ridge on their way to further destinations in the Desert National Wildlife Refuge. Being on foot, I have the opportunity to spend more time today on Fossil Ridge and travel along the top of the ridge all the way from the Eastern to the Northern edge in search of ancient fossils.

The best time of year for this adventure is Fall, Winter or Spring. Though the elevation is about 5,000ft, Summer temperatures in the area can easily reach 110 degrees or higher.

Just beyond the Desert National Wildlife Refuge Visitor Center, you will see a directional sign for the 100s of miles of unpaved 4WD roads in road system for the refuge. Take a right onto Mormon Well Road and proceed up Mormon Well Road for about 5 miles, continue past the intersection of Gass Peak Road.  Mormon Well Road will pass between the Southern tip of the Sheep Range (on your left) and Fossil Ridge (on your right). This area is called Yucca Pass.

In about a quarter mile you will emerge from Yucca Pass. As the area opens up beyond Yucca Pass into the Sheep Range Valley, you will see the largest, most amazing Joshua Tree forest ahead and to your left. To your right is the Eastern edge of Fossil Ridge. Ascend the Eastern edge of Fossil Ridge and head West along the top of the ridge, all the way to it’s Western edge. Alternately you could head East along the ridge for another adventure. We’re heading West today.

Discovery: Fossil Ridge Extends a Few Miles to the East of Yucca Gap

The actual route followed the route summary above, written a couple days before the adventure. One big discovery: The entire route I took covered only the Western end of Fossil Ridge. The Fossil Ridge area bordering Yucca Gap, though pretty substantial, is just the Western area of the much longer, extended Fossil Ridge that continues for a few miles to the East. This means I need to return and head further East along the total base and then traverse the summit on the way back. Future adventure.

2 Discoveries Within the First 5 Miles

Beginning at the Desert National Wildlife Refuge HQ, I made a couple new discoveries on Mormon Well Road on the way to the intersection with Gass Peak Road. First, I discovered a small oasis of tall reeds and cattail in the midst of the surrounding barren desert. These plants only grow where there is a lot of water, indicating an underground spring. There are a lot of water sources in the desert if you know where to look, and a clump of reeds is a sure indicator.

Later on I discovered a new viewpoint turnout that must have been recently constructed by the DNWR folks. I’d seen additional viewpoint turnouts much further up Mormon Well Road…at 10 and 15 miles approximately. If you’re driving, take advantage of these as they are positioned in locations with incredible views.

Scoping Out Potential Southern Climbing Routes in the Sheep Range

Soon after passing the intersection with Gass Peak Road, Mormon Well Road approaches Yucca Gap (the gap between the Southern tip of the Sheep Range and the Northern Edge of Fossil Ridge). In this stretch, before reaching Fossil Ridge, I began scoping out potential Southern climbing routes in the Sheep Range. There is a huge visible alluvial fan on the Southwest corner of the Sheep Range. An alluvial fan is composed of rock and debris washed down from a canyon in the mountains and fanning out at the base of the canyon. You can’t miss this fan as it fans out over an area of about one square mile. The fan and canyon or ridges at the fan’s summit appeared to be the best potential key to the Southern summit area of the Sheep Range.

The closer you get to the Sheep Range, what looked like gradual inclines from a distance are marked with sharp cliffs and drop-offs. The Southern area of the Sheep Range does not look friendly for hiking or climbing. Lots of class 3-5 sections, and I imagine a good portion of the terrain is loose rock.

The Southern tip of the Sheep Range opposite Fossil Ridge looks even more imposing when viewed from Mormon Well Road. There are a couple approaches that at first look fairly doable, but they end in a bowl surrounded by cliffs. Perhaps once up in the area a route will appear, but it doesn’t look good from Mormon Well Road. Future adventures!

The Northern Base of Fossil Ridge Through Yucca Gap

As you approach the Northwest side of Fossil Ridge there appear mounds of dark rock. It’s not hard to imagine these on the bottom of the sea or along ancient shores. If you’ve ever been to a coastline cliff with waves crashing against the rocks…these dark rocks will look familiar. And, these dark rocks and the dark rock cliffs along the Northern side of Fossil Ridge are embedded with fossils…most noticeably the spiral nautilus, from the Cretaceous Period 250 million years to the Ordovician Period 450 million years ago and even older, potentially dating back to Pangea, the one huge continent 500 million years ago that eventually separated into today’s multiple continents.

The rocks show an ocean bed teaming with life. It’s a strange feeling touching a fossilized nautilus shell and imagining you might be the first person to touch that shell in 250 million years! The slideshow and video on this page vividly capture the views of these fossils. I photoshopped the slide show view to further bring out the fossils.

Curiously, it so happened that most of the fossils on this end of Fossil Ridge are at the base of the ridge…much more than seen while ascending toward the summit, though there are a few nautilus and other fossils to be found on the summit.

Ascending the Eastern Edge of This Western Portion of Fossil Ridge

As I rounded the corner and began ascending the rather dramatic incline of dark rock slabs on the Eastern edge of this Western portion of fossil ridge, I appreciated the rough traction of these rock slabs. I felt almost like a fly climbing a wall! At the same time, as I quickly rose higher and higher, and there were a number of class 3 sections, I realized that this rough rock would be like a cheese grater if I stumbled! But the ascent was fairly easy. And, looking back over the expanse of the Eastern Sheep Range Valley is to look down upon the largest Joshua Tree forest I have ever seen, which can only be measured in many square miles, many many times larger than the Las Vegas Strip!

During this ascent on the ancient dark rock slabs, I had expected to see even more fossils. I did not see one! I was not looking forward to descending that steep incline. Fortunately I discovered a much more gradual route back down.

The Summit of Fossil Ridge

The summit of Fossil Ridge is like a scene from The Land That Time Forgot. I don’t think many humans walk the summit of Fossil Ridge…I saw absolutely no sign of human passage…no rock cairns, no camp fires, no foot prints…nothing. Yet, the summit is around a half mile in length and at least 200ft wide. It’s a total, unique world up there with its own Joshua Trees and other vegetation along with some sparse but obvious fossils embedded in the darker rocks. Either the ancient seas here were 2000-4000ft deep or the seas were more shallow and the land has risen. Probably a little of both. I felt like the only human to have ever stood on that place.

The Views from the Summit of Fossil Ridge

The views from the summit of Fossil Ridge are spectacular. There is the Southern edge of the Sheep Range immediately across Yucca Gap below, the huge Joshua Tree forest covering the massive valley just East of the Sheep Range, the Las Vegas Range on the Eastern edge of that valley, then there is the much longer expanse of greater Fossil Ridge stretching out for a few miles to the East, Gass Peak is almost immediately to the South, the Northern edge of residential Las Vegas Valley can be seen, Potosi Mountain, Damsel Peak, La Madre Mountain, the Mt. Charleston Wilderness and further to the North to McFarland Peak, Bonanza Peak and beyond. Dimly, in the distance there’s even the faint outline of Telescope Peak and the Panamint Range on the far side of Death Valley.

There are a number of small canyons immediately below the summit and to the North. These look like potential locations for further fossil discoveries. And, there is what looks like a potential route from this summit area to the summit of the longer portion of Fossil Ridge to the East. Future discoveries!

Descending Back from Fossil Ridge Summit to Yucca Gap

As I mentioned, I noticed from the summit a more gradual descent gully that diagonally cut from the Eastern edge of this summit area downward into mid-Yucca Gap. This was much easier going than the Eastern slope I had ascended earlier and is probably the most gradual route to and from the summit.

The summit of the Eastern portion of Fossil Ridge, above Yucca Gap, is well worth a visit even though the majority of the fossils to be seen are along the Northern base of the ridge. Still, there is a quiet, stark beauty on the summit with the feeling you are the only person to have ever stood in that place! 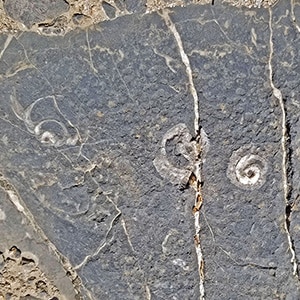 Article Name
Fossil Ridge End to End | Sheep Range | Desert National Wildlife Refuge, Nevada
Description
The summit of Fossil Ridge is like a scene from The Land That Time Forgot. It’s a total, unique world up there with its own Joshua Trees and other vegetation along with some sparse but obvious fossils embedded in the darker rocks.
Author
David Smith
Publisher Name
LasVegasAreaTrails.com
Publisher Logo