The Harris Mountain Griffith Peak Circuit is largely untouched wilderness with spectacular views of all the peaks in the Mt. Charleston Wilderness: Harris Mountain, Griffith Peak, Charleston Peak, Lee Peak, Mummy Mountain and Fletcher Peak. In addition there are spectacular views up and down the entire length of Kyle Canyon and Lovell Canyon along with views of the La Madre Mountains Wilderness area including La Madre Mountain and El Padre Mountain. You can see the tips of Bridge Mountain, Rainbow Mountain and Mt. Wilson in the Rainbow Mountains Wilderness and even catch a glimpse of the Las Vegas Strip. And to the North, there are views of the Sheep Range and Gass Peak.

Note: You can also view the Griffith Peak Harris Mountain Circuit adventure which takes this route in the opposite direction and is much quicker.

Prepare for a day of peaceful solitude as you are most likely not to see a single person between the South Climb parking lot and the summit of Griffith Peak. Also, have adequate provisions, especially water. And take care not to go beyond your comfort level, because if you injure yourself along the way there is likely to be no cell phone coverage and you may not be found for a period of months or years! On a more positive note, you can complete the entire course without exposing yourself to any dangerous drop-offs, and you can design your route, as I did, with nothing beyond a tame class 3 climb. The circuit is mostly a test of wilderness navigation and endurance.

The challenge of Harris Mountain Griffith Peak Circuit involves traversing many wilderness avalanche slopes, and on this initial adventure took a total of 11 hours. Compare this to my time traveling the entire 4-Peak Charleston Peak Circuit and summiting Griffith Peak, Charleston Peak, Lee Peak and Mummy Mountain along the way. That took me 12 hours, just one hour more!

Why did the Harris Mountain Griffith Peak Circuit take so long? Traversing the wilderness increases your time by a factor of 3 or 4. Traversing avalanche slopes is a slow process, step by step watching every foot placement.  On this day it took 9 hours to get from the South Climb trailhead to the summit of Griffith Peak. I believe I can shave off up to 3.5 hours by avoiding diagonal or horizontal avalanche slopes, taking roads through the Rainbow Sub Division vs. avalanche slopes above the sub division and spending less time shooting video (I spent about 1.5 hours shooting video on this day).

Directions to the Trailhead

Beginning at the South Climb Trailhead parking lot, you’ll notice an adjoining parking lot to the East. Circle around above the dividing fence and then descend into this adjoining parking lot. There is a pretty awesome and huge interpretive area immediately below this parking lot with picnic tables and a series of cement trails lined with interpretive signs. It appears this area is still under construction and I suspect that the project stalled at some point…due to lack of funding?

At any rate, on the far end of the interpretive area I connected with a series of avalanche slopes, slowly, step-by-careful-step, traversing them above the Rainbow Sub Division. Hindsight says that had I descended below the interpretive area and simply taken the roads in the Rainbow Sub Division to the upper end of the sub division, I could have shaved off about an hour. Next time!

Which ever route you take…the roads or the avalanche slopes…your goal is one of 2 ridges on the upper end of the sub division that ascend to the summit of Harris Mountain. There is a ridge on the left that ascends directly to the summit. There is a more gentle ridge on the right that ascends to a point above the Harris/Griffith saddle…on the Harris Mountain side. One of these ridges may be faster than the other. On this day I took the ridge on the left. My ridge strategy may not have been ideal as I traversed the area on the right side of the ridge below the ridge summit. More ideal would have been to ascend directly to the ridge summit and then ascend the top of the ridge to Harris Mountain summit. The views would have been better, though I’d have needed to navigate a number of rock formations on the top of that ridge. Next time!

The ridge itself is beautiful, with spectacular views of Kyle Canyon and the Mt. Charleston wilderness all the way up…if you take a route along the top of the ridge. There is a false summit about 800ft below the true summit of Harris Mountain. In all, ascending this ridge is an endurance and wilderness navigation test…but very enjoyable if you like piecing together a best route.

Once on the summit of Harris Mountain, use the base of the Harris/Griffith saddle with its distinctive cliffs as a point of reference as you descend the North ridge down to the base of the saddle. You can pretty easily navigate in such a way as to avoid your only obstacle, which is a lot of brush. Favor the left side of the ridge (it’s clear when viewing the first slide on this page).

At the base of the saddle, the challenge is to circumvent a rather huge cliff. Fortunately, there is an old, well constructed but poorly maintained trail that circumvents the cliff on the left side, winding its way up to the Griffith Peak South ridge. That South ridge will take you all the way to the summit of Griffith Peak. However, it’s not that simple. The trail at some point disappears and you’re left to navigate a few avalanche slopes to circumvent further cliffs and rock formations along the way.

Here is my best strategy for accomplishing this leg of the route along the Griffith Peak South Ridge: After ascending the old trail on the left side of the cliffs at the base of the Griffith/Harris saddle, continue straight on a faint trail that looks like a continuation of the old trail. This trail will appear and disappear, but generally, you’re proceeding along a relatively level route on the left side of the ridge and about 200ft lower than the summit of the ridge. My experience is that if you try to travel up the summit of the ridge you’ll be blocked by cliffs which you will need to circumvent on the upper ridge on avalanche slopes.

Continue on this faint appearing and disappearing trail space about 200ft below the ridge summit until you see the last of the upper cliff systems. Now ascend to the summit of the ridge. There is an opening near the upper end of the final cliff system. These 200 feet will be your only avalanche slope navigation for the entire Griffith Peak North Ridge, and your best way of navigating a streamlined route up that ridge.

Once at the summit of the ridge above the final cliff system, it’s an easy ascent up that final 800ft to Griffith Peak summit!

Descent from Griffith Peak Summit Back to the South Climb Trailhead 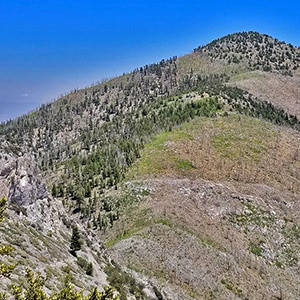