Getting to the Rainbow Mountains Mid Upper Crest Ridgeline on Foot

Just getting to the Mid Upper Crest Ridgeline requires a long-distance effort if you’re on foot and ascending Rocky Gap Road from the Willow Spring area in Red Rock Canyon. By the time you actually reach the Mid Ridgeline you will have invested 6 miles and be committed to another 6 miles on the return trip. This is a total of 12 miles just to get to the Mid Ridgeline and back! And, taking Rocky Gap Road on foot cuts down the length of the Mid Ridgeline one can cover on an out-and-back trip from Willow Peak. Even so, I did make it to just North of Rainbow Mountain on the ridgeline, making an important discovery which I will describe below.

The Challenge of Rocky Gap Road by Vehicle

If you have a very rugged 4WD vehicle (There are multiple sections of huge rocks to navigate!) you can knock 10 miles off the approach by driving up Rocky Gap Road to the North Peak/Bridge Mountain trailhead. Then with less than a one-mile approach trail you’ll find yourself on the ridgeline just South of North Peak.

This will give you an idea of the challenge Rocky Gap Road poses on a 4WD vehicle: I began ascending Rocky Gap Road on foot at the same time a Jeep started its ascent. Along the way I invested about 10 minutes stopping to take pictures and videos. I still covered the 5 miles to the top of Rocky Gap Road arriving at the summit just ahead of the Jeep! And, I have passed a number of broken down vehicles on Rocky Gap Road during previous adventures.

One caveat, Off-Road Vehicles tend to do better on Rocky Gap Road. I’ve seen a number of such vehicles roaring by at a good pace on their way to and from Lovell Canyon during my previous Rocky Gap Road adventures. Knock yourself out! Rent one, beat it up, turn it back in broken and bleeding. Could be expensive: Rent, fuel, insurance, deductibles, repairs…ect. And, while you’re hiking the ridgeline, your rental is at the trailhead eating up rental hours! But…the off-roading does look like great fun!

The views along the Rainbow Mountains Mid Upper Crest Ridgeline are spectacular! To the East you’ll get aerial views of Bridge Mountain, Rainbow Mountain and Mt. Wilson from multiple perspectives. In addition, to the East you’ll see Red Rock Canyon and Blue Diamond Mountain below, Damsel Peak, the Las Vegas Valley along with the Strip and in the distance beyond, Frenchman Mountain, Sunrise Mountain, the Muddy Mountains and further East toward the Grand Canyon area in Arizona. To the West you get a huge panorama of the Keystone Thrust cliffs with Griffith Peak, Harris Mountain and the tip of Mummy Mountain as a backdrop. To the North there is North Peak, the Northern stretch of the Rainbow Mountains Upper Crest Ridgeline and La Madre Mt., El Padre Mt. and Burnt Peak. To the South you can view the Southern stretch of the ridgeline with Potosi Mountain as a backdrop.

The best time of year to traverse the Rainbow Mountain Wilderness Mid Upper Crest Ridgeline is Fall or Spring. Summer can bring temperatures exceeding 100 degrees and Winter brings snow and ice which can slow you down, limiting the distance you can cover on the ridgeline.

2-Vehicle Strategy: To cover the entire Rainbow Mountains Upper Crest Ridgeline from South of North Peak to Highway 160 at Potosi Mountain you might park your one very rugged 4WD vehicle at the summit of Rocky Gap Road and another passenger sedan at the Mountain Spring Trailhead on Highway 160. This will still be a long day and you might do this in early Fall or late Spring when you have maximum daylight. Also, it would be advisable to have covered sections of the ridgeline prior so that you are familiar with the route.

2-Day Strategy – Still Requires 2 Vehicles: Do as above, but camp at the half-way point.

From I-215 take the Charleston Blvd exit (at Red Rock Casino) and head upward through Summerlin toward Red Rock Canyon National Conservation Area. Take the Red Rock Canyon scenic drive past the high point overlook to the Willow Spring picnic area between White Rock Mountain and the Rainbow Mountains that border the West side of Red Rock Canyon. Begin by heading up Rocky Gap Road.

Following the challenge of ascending around 1,500ft up Rocky Gap Road to its summit area, you will take a left onto the unmarked Bridge Mountain Trailhead, which is also the approach trail to the Rainbow Mountains Upper Crest Ridgeline. You’ll know you are at the summit of Rocky Gap Road because there is a parking area and Rocky Gap Road begins a healthy descent toward Lovell Canyon at that point.

There is no clear trail along the ridgeline from this point onward. However, you will see signs of a faint trail now and then: A passage through the brush, a lonely cairn, a faint pathway. The key from this point onward is to hug the upper left side of the ridge. There will be a number of points along the way where there are other ridges splitting off to the right and downward. As you stay to your left, faint signs of a pathway will appear, disappear and reappear. One observation is that this ridgeline only gives you about an 8th mile view ahead at every point after which it seems that you might reach a sudden drop-off. However, when you arrive at that “next point” a new stretch will open up before you. Trust that the ridgeline will continue and that you can navigate it without any rock climbing…at least as far as Rainbow Mt and Mt. Wilson. I believe/hope the ridgeline will continue its fairly easy (class 1-2) route beyond that area.

Re-ascent Along the Ridgeline Above Rainbow Mountain; 4 Potential Route Choices Ahead

At this point the Rainbow Mountains Upper Crest Ridgeline again begins to ascend. This is where today’s adventure ended. However, looking ahead, four potential routes appeared which I will explore in future adventures:

I have not yet explored these 4 routes. At this point they seem possible with nothing more than class 3 rock climbing skills, but I cannot verify their difficulty level until explored. If this trail runner encounters class 4 and 5 sections, that will be a turn-around point! However, for you skilled rock climbers, this will show you how to get to your fun zone! 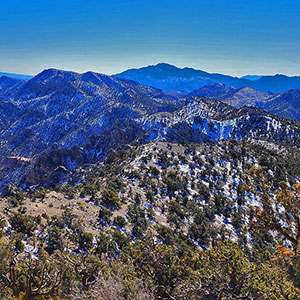