Charleston Peak is the highest mountain in the Spring Mountain Range and in Southern Nevada.

The summit itself is rather stark with absolutely no plant life. The only features were constructed, the most prominent being the American flag waving atop a 15-20ft post. Beyond that there are a couple solar collectors powering a radio repeater and there’s a pretty substantial rock shelter which provides some welcome relief from the high winds that whip across the summit.

Though the summit is bare and rocky, the view from the summit is second to none in Southern Nevada. Here you get the best view of the entire North-South Charleston Loop including all the mountain peaks mentioned above, along with a great view of Charleston Village over 5000ft immediately below, then all the way down Kyle Canyon to I-95 and beyond. You can see parts of the Las Vegas Valley from Gass Peak (which borders the Sheep Mountain Range and the Desert National Wildlife Refuge) on the North end of the valley all the way to the Southern end and on down to California. Central, to the West, is the La Madre Mountains wilderness. To the South East there’s a great view of the town of Pahrump, and if you look carefully, a very hazy view of Telescope peak in the background, bordering the East side of Death Valley. A lot more is visible on a clear day. To get the complete list take out a map and draw a circle about 150-200 miles around Charleston Peak!

See the directions on the Griffith Peak page.

Trail Directions to Charleston Peak via the South Climb

For the lower part to the junction, see the trail directions on the Griffith Peak page.

Trail Directions from the Junction to Charleston Peak

At the Junction take a right heading toward Charleston Peak (left if you’re heading for Griffith Peak). After turning right the trail briefly rises over a hill then levels out along a one-mile beautiful alpine meadow skirting the upper South side of Kyle Canyon. After about a mile, the trail weaves around then rises through the 2013 burn area where an entire 2000 year old bristlecone pine forest was consumed by fire in a day. Near the top of the burn area the trail curves left. Just before the curve, walk a few feet along a solid rock shelf to look over the South edge of Kyle Canyon and view the entire canyon and across to Mummy Mountian and the North edge of the canyon. This state of the adventure is about 2 and a half miles.

The trail then curves around and to the left providing great views of the entire burn area, the alpine meadow you just passed through and all the way to the Junction and Griffith Peak. Now the trail curves to the right and rises up to a saddle providing a view of Charleston Peak to the West and Griffith Peak to the East.

At this point you have 3 choices. First choice: you can stick to the main trail and descend about 100-150 feet, then reascend up to the plane crash site and on over to Charleston Peak. Second choice: Descend about 30 feet then take a faint but clearly visible trail the rises up to the upper South edge of Kyle Canyon. Better views, less descent and reascent. Third choice: This is my favorite. From the saddle take a right directly to the upper South edge of Kyle Canyon and then take a left along the rim to the plane crash site. It’s a little more tricky than the second choice, but well worth it for the views. If it’s at all windy try to stay at least 4-5 feet from the edge of the rim. High winds can knock you off your feet! At any rate, the view along the rim is incredible. All the way you see the entire expanse of Kyle Canyon from Charleston Peak to Lee Peak, Mummy Mountain and Fletcher Peak and on down the canyon towards I-95. This stage of the adventure is about a mile.

From the Plane Crash Site to Charleston Peak: 2 Routes

Near the end of the South Rim you’ll come to the site where a CIA C-54 Military Air Transport Service plane crashed on November 17, 1955 carrying 14 men working on the secret Cold War U-2 spy plane project. The full story can be found here. You’re now less than a mile from the summit, but it’s a pretty steep ascent!

From the crash site you have 2 choices. First choice: Connect again to the main trail about 100ft to the left of the crash site and wind around the far side of a large ridge and on up the the summit of Charleston peak. Second choice: This is my favorite as it gets the ascent over with more quickly and has the best views. Continue straight up, veering slightly right to the top of the ridge beyond the crash site, then keep to the outer edge of the ridge as it continues on up to Charleston Peak summit.

A Word of Caution

The high outer ridge routes I’ve suggested on this page are exposed with no shelter from the wind. On days with high winds you might want to take the lower routes unless you enjoy being buffeted by the wind. I actually enjoy it as long as it’s not too extreme. Definitely, on low visibility days stick to the lower routes or risk getting off course and potentially straying over the canyon rim! 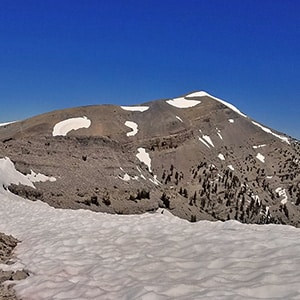