Mummy Mountain’s Knees are on the Eastern end of Mummy Mountain just before the toes. To see a really awesome image of Mummy Mountain where the Mummy comes out clearly, view the 4-Peak Circuit Page slide show. Mummy’s knees, pretty much unknown to most hikers, are a beautiful bristlecone pine forest arising out of what appears to be a solid slab of limestone. Mummy’s knees are a cliff ledge surrounded by imposing cliffs facing sheer drops. The view from Mummy’s knees is spectacular including Mummy Mountain summit area, the North Ridge of Kyle Canyon, Lee Peak, Charleston Peak, the South Ridge of Kyle Canyon, Griffith Peak, Harris Mountain and the saddle between the two framing the length of Lovell Canyon with Potasi Mountain in the background. One can also see Mummy’s Toes with La Madre Mountain in the background, Centennial Hills, Gass Peak, the Sheep Range and Mt. Charleston Observatory.

Since few people know of the existence of Mummy’s Knees, that summit is a very peaceful solitary experience resting on the solid limestone surface beneath ancient bristlecone pine trees. I’ve been up to Mummy’s Knees around 4 times now and have never seen a soul on that summit.

The adventure begins at the Trail Canyon Trailhead in the Mt. Charleston Wilderness about 30 miles from the Las Vegas Strip (as the crow flies). See the directions to the trailhead on the Mummy Mountain West page.

The North Loop Trail will circle around the right (East) end of Mummy Mountain (the prominent cliff that is Mummy Mountain’s Toes) gradually ascending to the base of the toes where the ancient 3,000 year-old Raintree is located. Along the way there are spectacular views of Harris Mountain, Griffith Peak, the saddle between (which together make up the Harris/Griffith Circuit) and Fletcher Peak.

After about 1/4th mile you will arrive at Mummy Springs. Don’t be mistaken, it does not look like a spring. There is a ledge about 200 feet up a wash that is wet in a few places. This wet area on the rock remains water soaked year-round and is Mummy Springs. In the Fall, Winter and Spring the water dribbling over the rock turns to ice and builds up thick layers until it becomes a beautiful frozen cascading waterfall!

About 1/2 – 1 mile above the class 3 climbing section you’ll arrive at the summit of Mummy’s Knees! 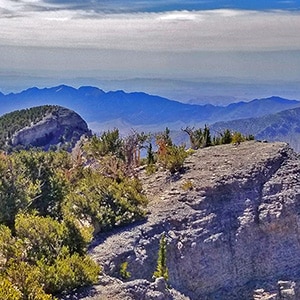