Hollow Rock Peak is the second to the Southernmost peak in the Rainbow Mountains with South Peak just beyond. It’s a great 5-mile round trip and offers climbing levels from class 2-3 to class 5, depending on the route you choose (see below). And the calico boulders, pinnacles, cliffs, ledges and scattered bonsai-like bushes and trees make this an adventure of wonder.

Spectacular Views Along the Way

Note About the Upper Crest Ridgeline

Take I-215 to the Charleston Blvd. Exit in Summerlin, then head upward toward Red Rock Park. Pass Red Rock Park, continuing on Hwy 159. Pass the town of Blue Diamond, then turn right onto Hwy 160 toward Pahrump. Hwy 160 will ascend upward to a high point just before the town of Mountain Springs. Around that high point park at the Mountain Springs Trailhead on your right. The trailhead has no marking and is a hard right turn off Hwy 160 onto a dirt road and into an area that looks like an unimproved campground with scattered areas to park. If you are the first to arrive in the morning it’s not obvious that you are at a trailhead. To make the Mountain Springs trailhead even more difficult to recognize there is a large sign at the entrance “Residential Use Only”.

Why an Initial Exploration?

The route to Hollow Rock Peak is fairly brief and simple (5 miles RT), so why more than one exploration? This first time I wandered around in the maze of the calico rock area in search of the most direct route to the summit with no more than class 3 level climbing. In the process I explored a few dead-end routes, meaning that to proceed would require a class 4 or 5 skill level. Eventually I discovered the most direct class 3 approach and streamlined it on the descent. A follow-up trip will completely streamline the out and back adventure.

Another reason this is the initial exploration and requires a follow-up is that, with all this meandering, by the time I reached the huge boulder, the true summit, less than 50 yards beyond, was hidden from view. I thought I’d reached the summit and therefore stopped there. In reviewing my photos later, I realized that the true summit was just a little beyond!

Of course, the question: Why not use GPS? I like to get lost and find my way around. This gives me a more complete understanding of the surroundings and sharpens my decision making and route finding skills. By the time I finally reach a summit, I know the entire mountain.

For these reasons, a second streamlined trip to Hollow Rock Peak is in order. In the meantime, what follows here is my account of the meandering discoveries of the initial exploration.

From the Mountain Springs Trailhead, if you’re on foot, take the unpaved road angling right (North) and upward from the trailhead. You’ll soon see a communications tower ahead. Head for the communications tower and continue around the gate to the left of the tower, descending to the beginning of the trail to the Rainbow Mountains Upper Crest Ridgeline. You can see the ridgeline to your right. The trail heads for that ridgeline. As you ascend, watch for potential summit approaches to Potosi Mountain and look behind to take in views of the Mt. Charleston Wilderness including Charleston Peak, Griffith Peak, Mummy Mountain and Harris Mountain.

As you top the Ridgeline, a spectacular view opens up to the East. Immediately visible is Windy Peak. Note a small cairn marking the location of the trail you just took from the communications tower. You won’t want to miss that intersection on the return trip!

Now, at the trail intersection, a right turn heads South to the two Southernmost peaks in the Rainbow Mountains: Hollow Rock Peak and South Peak. A left turn heads to Windy Peak, Black Velvet Peak and to other points North along the Ridgeline.

Take a right and head up to the high point which is the Southern tip of the Rainbow Mountains Upper Crest Ridgeline. Now you can see the ridge to Hollow Rock Peak below. The trail begins to descend toward Hollow Rock Peak and reaches the calico rock section within about a quarter mile. The demarcation line where the ground turns from brownish gray to calico is actually the fault-line of the world famous Keystone Thrust. That fault-line stretches through Red Rock Park and all the way to Valley of Fire State Park and beyond.

From Hollow Rock Peak Ridge to the Summit

Soon after you cross into the calico rock section, you’ll continue to an additional high point. Take time to deviate from the trail to that spectacular high viewpoint, then descend again to the trail. Soon the trail will become harder to pick out as it enters the calico boulder section. There are cairns, but realize that the cairns along the Hollow Rock Peak Ridge were placed by different hikers and climbers. Some will lead you to class 4-5 sections, which like myself a class 3 climber, you may see as dead-ends. You may need to experiment a bit, but rest assured that there is a streamlined class 2-3 approach all the way to Hollow Rock Peak summit. Check out the video on this page where I made a lot of dead-end turns and had to redirect myself until I finally discovered the best route.

Basically, the best route begins on the approach ridge, passes through a small saddle to the left, descends angling to the right and below the high summit ridge, ascends through another saddle, descends a gully on the other side of that saddle, then heads up toward a large red boulder which looks like the summit. Sounds a bit confusing? Watch the video.

That large red boulder looks like the summit. On this day there was a rope dangling from the top of the boulder to its base. I never trust ropes that had been exposed to the elements for who knows how long, and are anchored from above, who knows how securely?

The boulder blocked my view of the summit, less than 50 yards beyond, so I thought I’d arrived at the summit. Wrong! Photos from some of my earlier dead-end high points later revealed the true summit beyond. Need to return to complete the trip. In the meantime, the boulder is a good resting place with shade and a spectacular view!

Warning About the Mountain Springs Trailhead

When I returned to my car following this adventure I discovered it had been broken in. The passenger side window was completely shattered and removed. Fortunately there was nothing of value in the car and so, no loss other than the window. This is my first break-in ever in over 30 years of adventures. How to avoid this? Mine was the only car at this unmarked trailhead right off a major highway (highway 160). Why? It was the 2nd Saturday of October, Las Vegas temperatures predicted at 90 degrees. Too early in the season, too hot in people’s imaginings. Moral of the story: Park at protected trailheads or trailheads or busy trailheads. Don’t be the only vehicle on a trailhead right off a major highway! 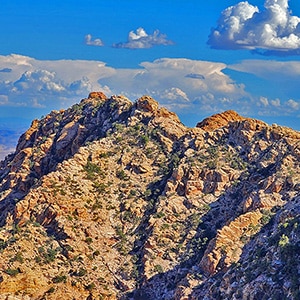