The road to Fossil Ridge and beyond in the Desert National Wildlife Refuge gets my award for one of the greatest trail running courses on earth. The unpaved surface is well graded with fairly smooth channels regularly cleared by 4-wheel drive vehicles. It’s wide enough that passing vehicles are not a problem. And, the network of back country roads extends further than most trail runners—even ultra-distance runners—can handle. The longest distance noted is 90 miles! In addition, there are multiple stepping off points to further explore and climb. And the views all along the way are continually incredible featuring The La Madre Mountain Wilderness, The Mt. Charleston Wilderness, The Sheep Range, Gass Peak and beyond. In addition, this is a great Winter run, always open when snow socks in the higher elevations.

That being said, the Northern side of Fossil Ridge is a pretty amazing place. There are fossils embedded in the rocks all along the base of the ridge. These can be seen even without climbing the ridge, especially in the darker rocks beginning in Yucca Gap which skirts the North side of Fossil Ridge.  The fossils only get more varied and abundant as you select a spot along Fossil Ridge, ascend and wander around.

There is ample parking at the visitor center, ungated so that you can begin and end your adventure as early or late as you wish. The roads are so well kept that running them in the dark is not a problem.

At the visitor center take a right onto Mormon Well Road and continue past the Gass Peak Road turnoff (4-mile point) another mile to where Fossil Ridge begins. You are now in the narrow passage referred to as “Yucca Gap”, between the Southern tip of the Sheep Range and Fossil Ridge. As you skirt along the North side of Fossil Ridge take time to look closely for the abundant fossils in the dark bedrock along the base. Pick any point along the way to ascend Fossil Ridge and view more fossils.

Beyond Yucca Gap Passage to the Yucca Forest

In another half mile, once through Yucca Gap, the scene opens up and Fossil Ridge curves to the right. This is the point where I located the spiral shell fossils. Fossil Ridge continues for a few miles past the South Eastern end of the Sheep Range. By this point you will have ascended about 1,500ft. Again, there are ample points where you can ascend Fossil Ridge to explore and view more fossils.

The scene expands into an upper valley with the largest Joshua Tree forest I’ve ever seen (officially the “Yucca Forest”), extending beyond the Southern tip of the Sheep Range on one side and along the Northern side of Fossil Ridge on the other.

Alternate adventures from Mormon Well Road include ascending the many canyons along the Southern and Eastern side of the Sheep Range or taking the Gass Peak Road turnoff to explore the Southern side of Fossil Ridge or the Northern side of Gass Peak, ultimately ascending the official Gass Peak trail directly the Eastern “true” summit of Gass Peak. This is an alternate route to the summit that does not involve the trip along the summit ridge of Gass Peak from the Mid-Summit to the Eastern True Summit. See the directional road sign in the slide show for the complete network of roads in the Desert National Wildlife Refuge. 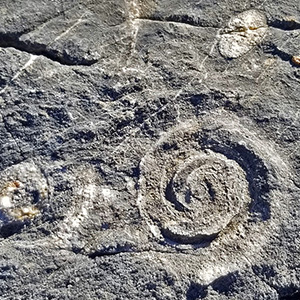 Article Name
Fossil Ridge North | Sheep Range, Nevada
Description
The Northern side of Fossil Ridge is a pretty amazing place. There are fossils embedded in the rocks all along the base of the ridge. These can be seen even without climbing the ridge, especially in the darker rocks beginning in Yucca Gap which skirts the North side of Fossil Ridge.
Author
David Smith
Publisher Name
LasVegasAreaTrails.com
Publisher Logo