Lava Butte is a distinctive landmark below Frenchman Mountain and to the East. It can be seen from many high points in and around the Lake Mead National Recreation Area including Fortification Hill, Mt. Wilson, Frenchman Mountain and others. Technically, Lava Butte is not in Lake Mead National Recreation Area, but so close that we are placing it in this section of LasVegasAreaTrails.com

Though it is only 2871 feet in elevation, Lava Butte offers sweeping views of Lake Mead and the surrounding area. In addition, it is a quick out and back summit for those days that you only have a few hours for an adventure.

Take I-15 North from Las Vegas, then East Lake Mead Blvd past the trailhead for Frenchman Mountain and down toward Lake Mead. Before you get to the Lake Mead National Recreation Area entrance on East Lake Mead Blvd, you’ll see a sign marked “Sunrise Mountain”. There’s a parking area at this sign. It’s about 2.5 miles along unpaved roads (4WD recommended) to the base of Lava Butte.

Second Exploration – Up the North Side and Down the West Side

This time around I had more time and ended up summiting Lava Butte from the North side and descending on the West side. The terrain on the butte is fun and challenging, and the view from the summit spectacular. To the West, there is the Las Vegas Strip with the Stratosphere standing out proudly. To the South, almost directly below, is the beautifully designed community of Lake Las Vegas. To the East is Lake Mead with Fortification Hill and Black Mesa standing out. Further to the West is the Rainbow Mountain Wilderness and Mt Charleston Wilderness. And of course, immediately West…you can’t miss it…is Frenchman Mountain. Curiously, you can see two Mt. Wilsons from Lava Butte summit: Mt. Wilson in Nevada’s Rainbow Mountains and Mt. Wilson in Arizona’s Black Mountains.

The volcanic rock boulders on the West side are a deep black gray, very beautiful! Descend the South side a bit before heading down the West side since the West side directly from the summit is quite a dangerous drop-off. The return via Lava Butte Road is quite a straight shot after weaving amongst the boulders above.

Initial Exploration – Ran Out of Time!!

The power lines are very substantial towers, the kind that carry power directly from major power sources such as hydroelectric dams (Hoover Dam in this case) and nuclear plants. You can hear the crackling of electricity above. I once heard the story of a person who lived beneath such power lines and placed a neon tube in their front yard. The tub lit up just from the power in the air. Incidentally, that person had a serious case of cancer…which may or may not have been attributed to the power lines. At any rate, I don’t suggest lingering beneath these power lines for an extended period of time!

However, not being limited by a car, I continued over a couple washes and up the North ridge of Lava Butte. As I mentioned, this is a fairly short trip to be taken when you just have a few hours for an adventure. I actually ran out of time and had to turn around on this initial exploration at the Northern summit ridge. I’ll return soon to complete the trip to the summit, and possibly make it a circuit adventure by ascending the North ridge and descending the South ridge to return via Lava Butte Road. 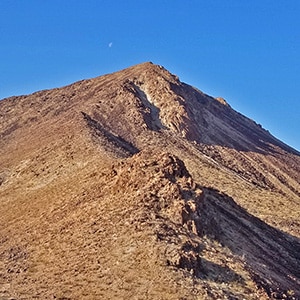 Article Name
Lava Butte | Volcanic Cone Between Las Vegas and Lake Mead, Nevada
Description
Lava Butte is a distinctive stand-alone volcanic cone below Frenchman Mountain and to the East. It can be seen from many high points in and around the Lake Mead National Recreation Area including Fortification Hill, Mt. Wilson, Frenchman Mountain and others.
Author
David Smith
Publisher Name
LasVegasAreaTrails.com
Publisher Logo