Elephant Rock stands in a small grouping of lighter rocks against a backdrop of larger red rock hills near the East end of Valley of Fire State Park, Nevada.  When I heard there was a rock named “Elephant Rock”, my first reaction was , “Sure, someone had a vivid imagination and you’re going to need to really stare at this rock to see an elephant. It’s like looking at clouds or star constellations and trying to see the images that fit the names someone gave them long ago.” Then I saw Elephant Rock and there was no doubt–it immediately looked like an elephant!

The Elephant Rock Loop itself affords great views of the red rock hills almost directly against the back side of the loop to the North where there are plenty of amazing rock formations along with additional rock formations on the loop. And there are no difficult parts to this trail if you’re traveling on foot.

In all, Elephant Rock Loop in Valley of Fire State Park, Nevada is well worth the stop if for nothing else than getting a good picture of Elephant Rock. 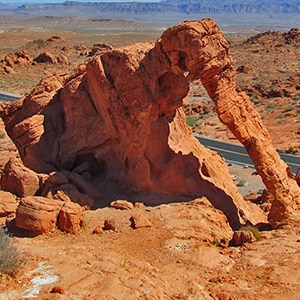