What I refer to as The Potosi North Trail just appears at the base of the Northern cliff line, then skirts the base of the cliff line heading Eastward. Though it may be a glorified climber’s approach trail, The Potosi North Trail is very well constructed and the views are spectacular — both along the trail and off in the distance. Along the trail there are elaborate rock formations including pinnacles and a few small natural bridges branching out from the spectacular limestone cliff face. The plant life is rich, a mountain pine forest. Then, there is the distant back-drop including Lovell Canyon bordered by Griffith Peak and Harris Mountain with Mummy Mountain dead center. Further to the East there are the Rainbow Mountains, Blue Diamond Mountain and the La Madre Mountains bordering Red Rock Canyon National Conservation Area. Beyond these there appears the Sheep Range, Gass Peak and Northern Las Vegas (Centennial Hills area).

In short, though the Potosi North Trail appears seemingly in the middle of nowhere with no clear trailhead — which probably accounts for the fact that I could not find its name — it is a beautiful, well constructed stretch of trail well worth exploring!

For the easiest, most direct route to the summit see The Potosi Mountain Southern Approach.

Take Nevada Road 160 (extension of Blue Diamond Road in Las Vegas) up to the top of the pass before it begins descending to Pahrump. Near the summit of the pass take a left onto Road 582 Mt. Potosi Canyon Road that should be signed for a Scout camp and Mt. Potosi Observatory. Download and enlarge the .pdf map on this page for greater detail.

Note on the condition of Potosi Canyon Road: The road is generally well graded enough for a sturdy 2WD vehicle, although the ascent is rather steep (1,200ft in the first 3 miles). The 1/2th mile past the United Methodist camp has steep ascent coupled with deep gravel which caused my 2WD dashboard to light up with wheel spin warnings, so I turned around and parked in a small parking area back at the intersection of Hwy 160 and Potosi Canyon Road, then continued up Potosi Canyon road for the initial 4 miles on foot.

In about 1/4th mile beyond the start of Potosi Canyon Road, you will see a Private Property sign which announces No Parking or Stopping for the next 2 miles. Continue these 2 miles on Potosi Canyon Road. Pass the Bronco Off Roadeo (which took over the former Boy Scouts camp), then the United Methodist Camp. Here you will enter the Spring Mountains Wilderness. The road will rise to a summit (about 1,200ft elevation gain) then begin to descend. After about one mile and about 500ft descent you will pass Camp Potosi (1/4th mile private stretch). Just beyond Camp Potosi there is a large hill, the beginning of a ridge heading up to the cliff line. Just beyond that hill and ridgeline there is a wide-spot parking area on the left side of Potosi Canyon Road which can accommodate about 6 vehicles.

Whether you traveled Potosi Canyon Road with a 4WD or sturdy 2WD vehicle, or as I did on foot, you’ve reached the parking area just beyond Camp Potosi. You now have two choices to reach the distinctive cliff line to the South (left):

This is my preferred route due to the much better view and more stable, gradual surface with fewer obstacles. Head up the large hill you just passed. If you took Potosi Canyon Road on foot, ascend this hill before you get to the parking area. The hill will become a ridge. Just keep navigating the ridge setting your site on the left corner of the cliff line above. There are a few slight up and downs along the way. Stay near the left edge for the most part but keep heading for the left end of the cliff line above. As you near the cliff line a faint use trail will wind up the steeper ascents just below the cliff line. That use trail will appear and disappear and eventually become a very nice, well constructed trail that skirts around the cliff line to the left.

Find a sketchy trail up the wash that roughly parallels the ridge route to the cliffs mentioned above. The wash has no view, involves frequent navigation over rock obstacles and at times the route is uncertain. If you’d taken the better ridge route you’d always known exactly where you were and your destination would always be visible. However, either way, as you near the cliff line a very nice, well constructed trail will appear.

This is the trail that starts at the base of the cliff line. It basically starts in the middle of nowhere and is far better constructed than either of the basically wilderness routes that got you to the cliff line. Steep sections actually have huge rock stairways, sometimes 30ft or more in length. Someone put a lot of work into this trail. As you continue along, in about 1/2 mile or so you’re really on the edge of the cliff base. The trail narrows with drop-offs below to your left and the cliff will to your right. In a very few places that are brief 5ft class 3 scrambles along that cliff line that can be a bit unnerving when descending, less problematic when ascending. So, though this trail is well constructed in most places, I would not classify it as a family hiking experience or recommend for those who are uncomfortable with class 3 cliff side stretches with huge exposed drop-offs below.

On my initial exploration of this trail I made the first 1-2 miles, being a bit spent from last week’s 30-35 mile Gass Peak Grand Crossing. However, that 2-mile stretch, near the end, began to reveal some fascinating upward ascent routes. One of these routes, at my turn-around point, was an avalanche slope ascending dramatically straight upward, but with a surface of larger stones that seemed stable enough. I could see that steady ascent for at least 500ft ahead. Don’t know what things look like around the corner, but if they get sketchy, unstable, greater than class 3 climbing, I can always head back down to the trail and try another potential off-shoot toward the cliffs. One day I will return to further scope out this Potosi North Trail and explore some of the potential routes leading upward. 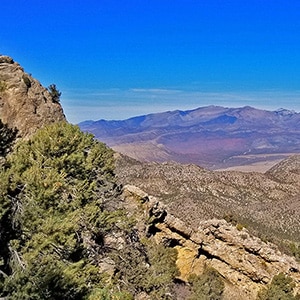 Article Name
Potosi Mountain Northern Cliffs Trail | Spring Mountains, Nevada
Description
The Potosi North Trail is very well constructed and the views are spectacular — both along the trail and off in the distance. Along the trail there are elaborate rock formations including pinnacles and a few small natural bridges branching out from the spectacular limestone cliff face.
Author
David Smith
Publisher Name
LasVegasAreaTrails.com
Publisher Logo