There were two goals for this adventure:

Even though my route took a very different direction than intended, I did accomplish these two goals and added a third great result: Exploration of the base of Rainbow Mountain’s Eastern cliffs and the rock climbing performed there.

Spectacular Views from the Base of Rainbow Mountain

A very good rock climber’s approach trail will take you to the base of Rainbow Mountain’s Eastern cliffs. Along the way you’ll experience sweeping views of Red Rock Canyon. To the Northeast there’s El Padre and La Madre Mountains on the Keystone Thrust. To the East there are Turtlehead Peak and Damsel Peak (Pincushion Peak) and a portion of Las Vegas Valley. To the Southeast there is Blue Diamond Mountain.

Go for Spring of Fall. Winter may be okay, but you’ll risk freezing temperatures and icy conditions which can make traversing over rocks and boulders very risky. I wouldn’t attempt this adventure within 24 hours of rain.

From I-215 take the Charleston Blvd exit (at Red Rock Casino) and head upward through Summerlin toward Red Rock Canyon National Conservation Area. It’s the first right turn after Calico Basin. Take the Red Rock Canyon scenic drive to the West side of Red Rock Canyon. Pine Creek Canyon will be the next major trailhead parking area past Icebox Canyon.

The Knoll Trail will take you up the Southern ridgeline of Pine Creek Canyon and along the East side of Juniper Peak. Some of the views mentioned above really begin to open up once you top the ridge! In addition, look back to see a sweeping view of Pine Creek Canyon, Mescalito Pyramid and Bridge Mountain.

Once you reach the Southeastern base of Juniper Peak, notice a huge boulder. This will be your reference point for the return trip no matter whether you’re heading for Juniper Peak or the Eastern cliffs of Rainbow Mountain. You can even see the boulder from the Oak Creek parking area, which is another approach to this point. However, I believe the Oak Creek parking area approach is a bit longer.

If you’re heading for Juniper Peak, circle around the South side of the peak, continuing along its base. You’re now in Juniper Canyon. The route will eventually descend into an area choked with brush. It will be a challenge to make a course through the brush. Eventually the angle of ascent will dramatically increase as you emerge from the brush into a scree field circling to the right between two high cliff lines. You’ll continue to ascend on a white Jurassic Era sandstone slab, hugging the base of the Western cliff to your left. As you reach a high ridgeline, take a left for your final approach to Juniper Peak’s summit.

Of course, it’s not as simple as that. This is the big picture view I saw from the base of Rainbow Mountain’s Eastern cliffs far above and across Juniper Canyon. I point this route out in the video on this page. It helps to know your basic route to Juniper Peak’s summit if that is your destination, because when you’re navigating the brush and boulders in the canyon below you will not have this large point of reference.

One more note for Juniper Peak climbers: Expect a lot of company, especially on weekend days in the Spring and Fall months. During the final ascent, on busy days, you may need to take a number and wait your turn! There are no actual numbers being handed out, but you get the picture! Part of the reason for the congestion is that Juniper Peak is a fairly easy class 2 climb with just a few class 3 (hands needed) sections. Very rewarding experience minus the risks you could experience scaling other peaks in the Rainbow Mountains.

Upward Toward the Base of Rainbow Mountain’s Eastern Cliffs

Now for my own route deviation. Back at that large reference boulder I pointed out at the opening to Juniper Canyon, I saw some cairns leading across the canyon wash and thought I might avoid the brush by going high along the canyon’s South side. Wrong decision if you want to ascend the Juniper canyon toward Juniper Peak and get an experience of the upper canyon. But great if you want to experience the base of Rainbow Mountain’s Eastern Cliffs and get a big picture of Juniper Canyon from above!

After crossing the Juniper Canyon wash I found myself on a good trail where brush and boulders were no longer a problem. Hindsight says this is the main rock climber’s trail to Rainbow Mountain’s Eastern Cliffs. All I knew at this moment was, “This is a great trail.” So I continued.

Realization the Trail Was Heading Toward Rainbow Mountain’s Eastern Cliffs

As the trail began to rise dramatically upward above Juniper Canyon it soon became clear that it was not going to lead up Juniper Canyon. But since it was such a great trail I continued upward. And this route was giving me quite an aerial view of Juniper Canyon and other great reference points in the distance all the way to the Black Mountains in Arizona!

Equally impressive is watching the tiny specks of rock climbers scaling those cliffs like insects on a wall! I took some close-up video of the climbers on this page. It seems impossible, where one might find a hold on the cliff face. There are a few well-placed ledges for rest, but even the ledges appear narrow and dangerous. This is definitely NOT on my bucket list, but it was great fun to watch and film. These are world class rock climbers in the world class rocking destination of Rainbow Mountain’s Eastern cliffs.

For the return trip, the good rock climber’s trail served well. There were a few class 3 (hands needed) spots to lower myself during the descent. Nothing really difficult for this non-rock-climber. And, that huge boulder at the base of Juniper Canyon was visible from way above at the base of Rainbow Mountain’s Eastern Cliffs.

In summary, Rainbow Mountain’s Eastern cliffs are an awesome destination even if you’re not a rock climber. And, it may not be a bad idea to take this route before ascending Juniper Peak, just to get a big picture view before diving into the brush and boulders on that summit route along the base of Juniper Canyon. 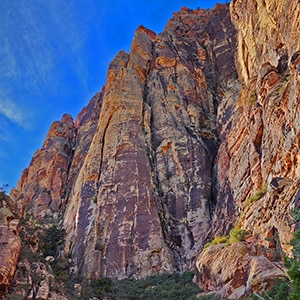