Of all the early 1900’s gold rush ghost towns in the greater Death Valley area, Rhyolite is the most elaborate with the largest population. The population of Rhyolite grew from a 2-tent mining camp in 1904 to a town with a population of 10,000 including the amenities of much larger U.S. cities of the day by 1907. Then, by 1910 with the decline of gold production in its Montgomery Shoshone Mine, Rhyolite was down to a population of 675. By 1920, only 13 years after its heyday, Rhyolite had only 14 residents and anything built of wood in the town had been scavenged leaving only the shells of the concrete structures that were once elaborate buildings. However, these concrete structures created a lasting memory of Rhyolite in contrast to other gold rush towns like Skidoo and Harrisburg which had no concrete structures leaving only the open desert as a memory.

In 1925 Rhyolite experienced a kind of rebirth as a tourist destination. Paramount pictures filmed “The Air Mail” in Rhyolite, the old train depot was renovated as a casino, bar and souvenir shop, the caboose used as a gas station and the Goldwell Open Air Museum eventually established.

For more, see the detailed Rhyolite historic timeline below along with an extensive list of the amazing features of the town at its height. The features list will blow your mind!

Today, visiting Rhyolite is an experience of imagining a booming early 1900’s gold rush town at its height. The video, slide show and description on this page give a more detailed view of the town both then and now along with a few of the mine entrances in the hills above.

From Las Vegas take Hwy 95 North to Beatty, Nevada. At Beatty Nevada take Hwy 394 (Daylight Pass Road) toward Death Valley National Park. About 10 miles after Beatty (and before the Titus Canyon sign) take a right onto a paved road at a well-marked sign for Rhyolite. Rhyolite is about a mile up the road.

We begin our tour of Rhyolite from the hills directly above to the Northeast. This gives a bird’s eye perspective of Rhyolite along with a look into a few mine openings in the hills. From there, we descend into Rhyolite to the red light district, the jail (still almost fully intact), some old miner’s cabins (one rebuilt in recent years), the train depot and caboose house, the financial district, school, general store, Thomas Kelly Bottle House and finally the Goldwell Open Air Museum.

In the video and slide show on this page I post the interpretive signs at each of these sites which you can read for further detail giving you a virtual walkthrough of this amazing historic early 1900’s gold rush town of Rhyolite. You’ll find additional detail in the timeline and features list below.

From Rhyolite’s Beginnings to Glory Days:

The Decline of Rhyolite:

Rebirth of Rhyolite as Tourist Destination: 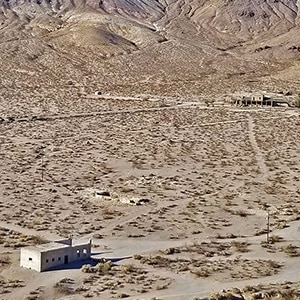 Article Name
Rhyolite Ghost Town | Death Valley, Nevada
Description
Of all the early 1900’s gold rush ghost towns in the greater Death Valley area, Rhyolite was the most elaborate with the largest population. Rhyolite grew from a 2-tent mining camp in 1904 to a town with a population of 10,000 before its decline in 1910.
Author
David Smith
Publisher Name
LasVegasAreaTrails.com
Publisher Logo