The Logic of Old Arrowhead Trail in Valley of Fire State Park, Nevada

The Beauty of Old Arrowhead Trail in Valley of Fire State Park, Nevada

But first, let’s look at the basic beauty and value of the trail. Old Arrowhead Trail in Valley of Fire State Park, Nevada, traverses the park East-West, just as Prospect Trail traverses the park North-South. These two trails are key to encountering the true beauty and layout of Valley of Fire State Park, Nevada. There’s not much of beauty on the Old Arrowhead Trail itself. You’re traveling mostly on a gravel surface through the desert. However, looking around, there is the mountain system on one side bordering the South side of Valley of Fire State Park, and the beautiful red rock formations characteristic of the park stretching out to the North. At points you can see the pass at the top of the Prospect Trail, then a little later the Valley of Fire State Park Visitor Center and the beginning of the Mouse’s Tank Scenic Drive. Finally, looking down to the East you can see an amazing panorama including the Overton Arm of Lake Mead. And, if you’re lucky, you might catch the flock of Bighorn Sheep that frequent the area at the West end of the trail.

If it’s mid-Summer with heat that can easily rise toward 120 degrees the trail can quickly become dangerous as one traveler, John J. Clark learned in 1915. His grave is on the trail near the East end of Valley of Fire State Park. John J. Clark, born in Canada, enlisted as a private in Company F of the New York Infantry in 1862, survived active duty in the Civil War which was quite an accomplishment. In 1915 he decided to take his buckboard wagon on a journey from Bakersfield to Salt Lake City. As he was passing through what is now Valley of Fire State Park, Nevada, he left his wagon and wandered around, possibly looking for water. He found his wagon again, crawled under it and died. A memorial now marks the spot across from Elephant Rock Loop.

More About the Logic of Old Arrowhead Trail in Valley of Fire State Park, Nevada

Back to the logic of Old Arrowhead Trail in Valley of Fire State Park, Nevada: The key to the logic is in the purpose of the trail. It was not created for hiking, but for motor vehicles of the type existing during the World War I era. The trail was created by multiple chambers of commerce as a business venture for transit between Salt Lake City and Las Vegas. Charles H. Bigelow, from Los Angeles was the trail’s top promoter. Between 1915 and 1918 he drove the entire route many times in his twin-six packard he called “Cactus Kate.”

Here’s the logic of the trail: Since the trail was originally a road, you’re going to make each crossing of a wash as short as possible. Why? Desert washes, as the name implies, “wash out” with every flash flood, filling with debris, and the surface of a wash is unstable sand, gravel and soil, at times wet and soggy. This is the perfect surface to bog down a motor vehicle, especially with the thin tires common during the World War I era. On the other hand, when traveling by foot during dry times it may be easier to just stay in the wash. However, if you do this you’ll lose the trail, which is okay because both the wash and the trail basically go in the same direction. The problem comes, as I discovered, when you’re in the wash with its lower perspective hampering the view of the surroundings, and you overshoot the end point. Because I merrily traveled down the wash, I overshot the end point by over a mile and had to traverse a large system of red rocks to regain the goal of Elephant Rock Loop. But during that additional unplanned exploration I discovered some rare rock formations and was treated to a higher panorama perspective to view the Overton Arm of Lake Mead to the East and the entire Southern expanse of Valley of Fire State Park all the way back to the Western trailhead to the West.

A Note About Desert Ecology

One final general note: Ecologically, the Old Arrowhead Trail in Valley of Fire State Park, Nevada, is very revealing. The old road was traveled by motor just a few motor vehicles over a hundred years ago. However, the dual tire track channels are still very clear in many places after a century. They may still be clearly seen over a hundred years from now. This demonstrates that when you disturb the desert soil, the marks you leave will likely outlast both your own lifetime and the lifetimes of a number of generations into the future.

The Old Arrowhead Trail in Valley of Fire State Park, Nevada, has an elevation difference of about 800 feet from the lowest point in the Eastern Wash to the highest point at the Western trailhead. Therefore, if you like to begin going uphill and end going downhill (which I prefer), you want to start at Elephant Rock Loop. I did the opposite during this trip, but it all worked out in this case as the incline is very gradual.

The West Trailhead is located just about 1/4th mile beyond the Western entrance of Valley of Fire State Park, Nevada. Look carefully because you might miss it, the sign, like the Prospect Trail and Pinnacles Loop Trail signs, is not very large and is meant to mark the trailhead, not designed to notify drivers as they pass by.

Paralleling a Wash along the Southern Border of Valley of Fire State Park, Nevada

Once on the trail you pass between the red rock formations of the Bee Hives and the mountain system that borders the South side of Valley of Fire State Park, Nevada. The trail/old road continues for a couple miles along the Southern border of the park, then begins to veer to the left toward the park’s Visitor Center. About a mile from the visitor center the trail veers to the right and now the closer mountain features are the long range of red rocks to the North. The trail, while never spending time in the wash except to briefly cross, does parallel the wash, mostly above and to the right all the way from the Western trailhead to Elephant Rock Loop to the East.

Now, regarding my deviation. You can see in the video on this page the exact point where I went off track. I discovered this on the way back. Near the end I entered the wash and continued down the wash for a couple miles, overshooting Elephant Rock Loop. By the time it became clear I’d gone too far there was a large system of red rock hills to the left between where I was and Elephant Rock Loop. I was not sure, but assumed Elephant Rock Loop was on the other side of those red rocks.

So, I ascended the rocks system and weaved, first reaching a higher perspective, then slightly angling back to the Northwest. Fortunately, it was possible to navigate the high points without ever coming to an impassible cliff or rock wall. This is remarkable as some of the rock walls in that system are 50 to 100 feet high!

Eventually, the main East/West road came into view, along with the parking area for the Natural Arches and Charlie’s Spring trails. Shortly afterward, I came upon a trail that led toward that destination. I reached the main road about a half mile from the parking area. There was a sign at the trail entrance that described the history of the Old Arrowhead Trail. Immediately across the road was Elephant Rock Loop! My little deviation may have cost me an hour or more and about 3 miles. However, the beautiful rock formation in that hill system including balancing rocks and arches of all kinds, along with panoramic views to the East and West, and the fun of navigating unknown territory, make it all worth while.

The Season and Temperature Can Change This Entire Adventure

Again, during the Winter months you have the luxury of getting lost and exploring the area. I wouldn’t recommend this during the Summer lest you run out of water and your fate be similar to that of John J. Clark! For this reason, when the desert areas in and around Las Vegas are nearing 120 degrees during the Summer months, I’m exploring the Mt. Charleston Wilderness at 11,000 feet and 40 degrees cooler (70 degrees and below)! 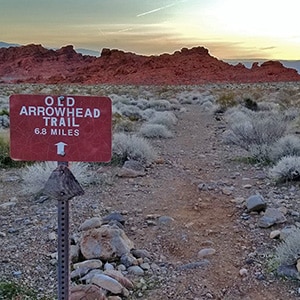