Silica Dome in Valley of Fire State Park, Nevada is just a very fun experience offering a combination of trail hiking and light but exciting rock climbing on an amazing surface. Silica, from which Silica Dome get’s its name, is the major constituent of sand. The dome itself is composed of very pure nearly white silica in rock solid form. Apparently, you do not want to breathe in the silica dust because it is a lung carcinogen and exposure can result in the disease of silicosis. In fact, one of the longest words, if not THE longest word in the Oxford English Dictionary, pneumonoultramicroscopicsilicovolcanoconiosis (remember those grade school spelling contests?), is the name of the disease caused by breathing in silica dust…mostly contracted by people working in the mining industry. However, unless you put your nose to the ground and breathe deeply in this position for a couple weeks, you should be okay. Enough for useless information!!

The trailhead for Silica Dome in Valley of Fire State Park, Nevada is located on a turnoff (take a right) from the Mouse’s Tank Scenic Drive between Rainbow Vista Trail and Firewave.

Circling Around Silica Dome and Heading Up to the Summit

The trail, which is only 1.2 miles in length — I believe that’s the out and back round trip — is visible only to the point where you begin climbing Silica Dome. From the parking lot begin by traveling around the back side of the dome in a clockwise direction. At first you’re on what appears to be a gravel road. As you round the dome the road gradually narrows until it disappears at the back side of the Silica Dome. At this point, head straight up the dome. You’re on solid, nearly white sandstone and the incline is at times fairly steep. However, I seldom needed to use my hands. It’s just a steep incline, not a rock scramble.

Ascending to the Summit of Silica Dome

As you rise up, look around to see an expanding vista behind to the town of Overton (I think), the Overton Arm of Lake Mead a bit to the left and the hills that border Mouse’s Tank Scenic Drive to the right. The sandstone itself is beautiful and the surface is rough enough that it’s fairly easy to keep your footing unless you’re wearing dress shoes! The top of Silica Dome affords an awesome 360 degree panorama of a good portion of Valley of Fire State Park. Below, you can see portions of the deep sandy channel of Fire Canyon in both directions across Valley of Fire State Park. The drop-off at the top is sheer so don’t be staring into your camera while walking around or engaged in deep conversation and forgetting where you are. That could be what we call a CLM (Career Limiting Move)!!

While on the trail at the base of Silica Dome I was surprised by the appearance of a small flock of bighorn sheep, which you can see in the video and slideshow on this page. 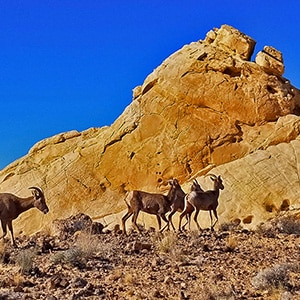