This is the easiest route to the Keystone Thrust summit from the South in Red Rock Canyon. It is entirely class 1 and 2 climbing (no hands necessary to maintain stability). There is one brief 20-30ft class 3 rock climb half way up the Keystone Thrust, but it is not too difficult.

Additional benefits to this approach to the Keystone Thrust Summit:

Major view points of reference include:

There’s a lot more. This was the short list!

Spring and Fall. Summer can get too hot at these elevations and Winter may require snow navigation skills.

From I-215 take the Charleston Blvd exit (at Red Rock Casino) and head upward through Summerlin toward Red Rock Canyon National Conservation Area. Take the Red Rock Canyon scenic drive past the high point overlook to the Willow Spring picnic area between White Rock Mountain and the Rainbow Mountains that border the West side of Red Rock Canyon.

View prior explorations of this route on the La Madre Mountains Western Approach page.

This exploration follows a 3-year lapse with this route. The intervening time has brought some significant changes resulting in a re-start:

Traversing the North side of White Rock Mountain from Willow Spring

From the Willow Spring Picnic Area take the White Rock Mountain Loop in a counter-clockwise direction. You’ll begin heading up Rocky Gap Road until the White Rock Mountain Loop quickly splits off to the right. There’s a La Madre Mountains Wilderness entrance sign at that point. Where the trail splits you are at the junction of 3 major wilderness areas: The Rainbow Mountain Wilderness, Red Rock Canyon National Conservation Area and the La Madre Mountains Wilderness.

By the time you hear water flowing below you to your right, indicating you have reached La Madre Spring, you have ascended over 500-800ft from your starting point at the Willow Spring Picnic Area. Now you’ve arrived at the canyon through which La Madre Spring flows. Notice the dramatic difference between the lush band of vegetation at the base of the canyon and the more barren desert above on either side. Also, notice that at this point the road ends and you’ll continue upward on a narrow trail bordering La Madre Spring. The trail is often obscured by brush. To make things a little more challenging, the trail is unmarked and crosses the spring a few times. If you miss a crossing, you’ll find yourself on the rather steep surrounding slopes and cliffs lining the spring.  To further add to the challenge, every time you cross the spring your feet get wet, then you need to ascend smooth rocks with those wet feet! But the springs are truly beautiful and flow year-round.

Experience the sights and sounds of flowing water at La Madre Spring.

Ascending Above La Madre Spring to the Miner’s Cabin

After crossing the spring a few times, you’ll find yourself on the left side ascending some steep smooth rock sections (with wet feet) to the more barren desert above the spring. You’re very close to the miner’s cabin at this point. Keep moving forward, it’s about 1/8th mile to go!

The miner’s cabin is not the traditional log cabin, but rather two small rooms lined with 5-ft high stone walls and a ceiling of branches that has mostly caved in. There are a few rusty cans scattered about. The imagination runs wild as you try to picture a lone miner living in these cramped conditions in such isolation. But then, as you emerge from the cabin look at the spectacular view from the front door: White Rock Mountain, Red Rock Canyon, Blue Diamond Mountain, the Rainbow Mountains, portions of the Las Vegas Valley and as far as the eye can see to the distance beyond these points! Then, you look up behind to the majestic cliffs of the Keystone Thrust. Perhaps it wasn’t such a bad life there in that isolated cabin!

Ascending the Keystone Thrust Above the Miner’s Cabin

Your ascent of the Keystone Thrust begins at the miner’s cabin. There is no trail marking, so you will need to explore the surrounding brush to the left of the cabin until you find something that looks like a pathway. Actually, you’ll see multiple rabbit trails branching out in different directions. A video on this page walks you through that initial confusing stretch. In short, just aim for the ridge to the left and behind the cabin and you’ll eventually come across a decent little trail.

The remaining stretch to the summit of the Keystone Thrust can be divided into two halves with a brief 20-30ft class 3 cliff climb between. Below the cliff line there is a fairly good trail that will take you to a weakness in the cliff line where you can ascend a slightly challenging rock climb. Once above the half-way cliff line the trails again become obscure, branching off in multiple directions. I created a cairn-marked path to the summit that begins when you take a right at the top of the brief class 3 section. By the way, in climbing terminology, class 3 means you need to use both hands and feet to ascend, but you don’t need ropes and climbing gear. Class 2 means you can walk along without barriers that require use of your hands.

The great thing about this approach to the Keystone Thrust summit is that, with the exception of the brief class 3 section, it’s a walk all the way to the summit! Good trail on the lower half, cairns marking the upper half.

Arrival at the Keystone Thrust Summit!

You’ll know when you have reached the summit of the Keystone Thrust. Suddenly an expansive view opens including the Mt. Charleston Wilderness, the La Madre Mountain Wilderness, Kyle Canyon nearly from end to end and the Hwy 95 corridor stretching beyond as far as the eye can see. Turn the other direction and you’re looking into Red Rock Canyon, the entire stretch of the Rainbow Mountain Wilderness with all the familiar peaks (Bridge Mountain, Rainbow Mountain, Mt Wilson) all the way to Potosi Mountain at the Southern edge of the Spring Mountains. And of course, there are Turtlehead Peak, the Calico Hills and the Las Vegas Valley with parts of the Strip. You’re seeing quite a slice of Southern Nevada!

Closing the Gap to Complete the Kyle Canyon Grand Crossing 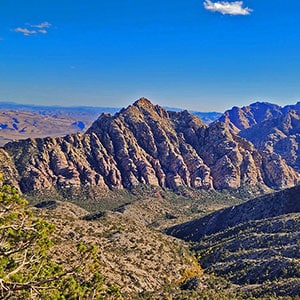