Views from the Summit of Hamblin Mountain

Though Hamblin Mountain in the Lake Mead National Recreation Area of Nevada is only 3312ft in elevation, it is positioned in a location that provides an incredible view hard to match anywhere else in Southern Nevada. This is in part due to it having 849ft prominence and being the highest point within 2.72 miles. The summit affords one of the best views of Lake Mead down to the Hoover Dam area and up towards the Overton arm. There are full views of Fortification Hill and Black Mesa to the South and Bowl of Fire, Muddy Mountains, Anniversary Ridge, Anniversary Narrows area and Frenchman Mountain to the East. In the further distance one can see Potosi Mt., the Rainbow Mountains, La Madre Mountains Wilderness, Mt. Charleston Wilderness, Gass Peak, the Sheep Range, Virgin Mountains, Jimbilnan Wilderness, Gold Butte and other locations that are currently unknown to me.

To the North lies the Pinto Valley. Curiously the 1948 geological survey marker at the summit of Hamblin Mountain refers to it as “Pinto”.

In this adventure I navigated a series of blind washes to Hamblin Mountain, never having been there before, armed only with having seen a picture of Hamblin Mountain and knowing that from the summit one could look down on Black Mesa and Lake Mead. This was a study in navigating desert wash terrain with only a vague notion of the general direction to my destination, a notion of what that destination would look like and that it was the highest point around.

The trailhead is at the turnout just beyond mile 18 traveling North on Northshore Road in the Lake Mead National Recreation Area, Nevada. The unmarked trailhead is on the right (East) side of the road.

As noted, this was a blind desert wash navigation experience. I made a few discoveries due to exploring the area:

I would probably not navigate blindly through desert washes during the Summer where temperatures can easily rise above 120 degrees. A wrong turn and losing one’s way could be fatal in these conditions. As it was, this day was the last Saturday in January where the average temperatures did not exceed 60 degrees. In addition, I was in a pretty well defined area between Lake Mead and Northshore Road. Traveling West would have eventually taken me back to Northshore Road in the event of getting totally off track.

Northshore Road Trailhead to Where the Wash “T”s out.

Cross Northshore Road from the pull-out parking area just past mile 18 head East along a fairly distinct but unmarked trail across from the parking area. Within about 100 yards the trail will descend into a large wash to the right. Continue East up that wash.

On this first trip I knew that Hamblin Mountain would be South East of the trailhead as it had a view downward to Lake Mead and Black Mesa. Black Mesa is approached from a few pull-out parking areas around mile 9-11 on Northshore Road, so is South of the mile 18 marker. Lake Mead is to the East…so , logically, Hamblin Mountain is South East of the mile 18 pull-out trailhead.

Main Trail from the “T” to the Summit

You’ll find a trail that appears and disappears that will take you South over a ridge and then down into another large wash where you will take a left and continue East. There is a pretty distinctive trail that angles up this wash and leads to Hamblin Mountain. This is the pretty well established North loop trail to Hamblin Mountain. The South loop on the other hand navigates from the mile 18 parking pull-out on North Shore Road circling to the South and East around the Southern side of the ridge system between the two main washes before ascending Hamblin Mountain.

However, I took another exploratory  route on the way to Hamblin Mountain. At the place where the initial Eastern wash forms a “T”, I traveled a bit to the left, soon to realize I was headed away from the area where Hamblin Mountain should be. So I took the “T” to the right (South), but then took another branch that split off slightly to the left and upward. Eventually I noticed a pretty distinctive high conical hill. Wanting to rise above the blind washes where I could see a larger view of the terrain, I circled around the mid section of the cone and then ascended its avalanche slope taking what looked like the most gradual avalanche ascent.

The avalanche slope is pretty tame compared to the East side of Mummy Mountain. There is no significant exposure. However, do not place your full weight on any of the large boulders. I don’t trust that every boulder is totally secure. And realize that too frequent avalanche slope navigation can lead to injury as I discovered last Summer when I explored the avalanche slopes of Mummy Mountain weekly and by the end of the Summer had a pretty persistent case of plantar fasciitis that is not completely healed even on this day.

North Side of the Hamblin Summit Ridge

Just beyond the summit of the cone there was a jagged rocky bluff that formed a higher summit. Winding around and up through the jagged rocky terrain I broke out into my first really grand view of the area. From this summit there is a saddle that leads to a further summit. In the midst of this saddle there is a barrier rock that spans the saddle. On this day I circled around below the base of the rock and to the right. Upon rising again to the saddle I noted that there was a shorter but a bit more class 3 ascent to the left and through the rocky area.

I continued above the barrier rock to the next summit which afforded an even more incredible view of nearly all the areas mentioned in the overview section of this page. From here onward it was possible to travel by trail for the remainder of the adventure. This summit ridge circled around to the Southeast, descended a saddle and then ascended to the summit of Hamblin Mountain. On the summit, there was a bit of navigating a few rocky areas with a bit of exposure to arrive at the very tip of the summit with the geological survey marker.

At the base of the final saddle before Hamblin Mountain Summit the main trail to Hamblin Mountain splits off to the West and winds down into the wash that will take you to the split-off trail to the right and over to the original wash. For a greater variety you also have a choice of bypassing that split off and continuing down and around the left side of the loop before eventually arriving back at the mile 18 pull-out parking area on Northshore Road. 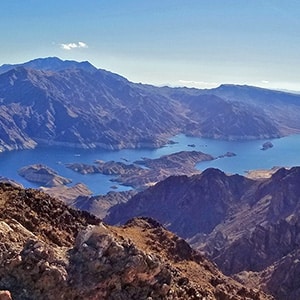