Scope of Adventure and Spectacular Views

This comprehensive circuit adventure covers most of the entire Eastern section of the Mt. Charleston Wilderness including the canyon off Deer Creek Road at the base of Mummy’s Head, the ridge leading up the left (East) side of that canyon to the very Northeastern tip of Mummy Mountain’s mid and highest section (Mummy’s Tummy), the route across the wilderness at the base of Mummy’s Eastern cliffs to Mummy Springs, then on to Raintree and the intersection of the North Loop Trail, the brief stretch of the North Loop Trail to its intersection with Fletcher Peak Trail, the summit of Fletcher Peak, then the return past Raintree and Mummy Springs to the Cougar Ridge Trail and finally the descent back to Deer Creek Picnic Area and Deer Creek Road where the adventure began. Besides contributing to the longest sentence on this website, the adventure probably covers more points of interest than any other adventure on this site. From Fletcher Peak Summit additional views included the Sheep Range, La Madre Mountain, Mt. Wilson, Harris Mountain, Griffith Peak, Charleston Peak, Lee Peak, Mummy’s Toe, Mummy’s Knees, Mummy’s Head and Chin, Cockscomb Ridge and Cathedral Rock. Basically, this adventure, more than any other, includes views of most of the Mt. Charleston Wilderness!

Accidental Nature of the Adventure

Curiously, this is an accidental adventure. I had attempted at first to summit Mummy’s Head or at least explore potential summit routes from Deer Creek Road. However, I was taken off course in my attempts to avoid the private property from Camp Stimpson in the base of the canyon to private homes on the left (East) ridge above the canyon. I kept angling up the left ridge of the canyon until I realized that I was at the very Northeastern tip of the Mummy’s Tummy Cliffs at the exact spot I had reached last year while traversing the wilderness from the Mummy Springs area. So, I decided to “close the loop” and just head back toward Mummy Springs and Raintree, summit Fletcher Peak then return to Deer Creek Road via Cougar Ridge Trail.

Missing Mummy’s Head was not a complete loss. I was able to take some great pictures of Mummy’s Head and potential climbing routes from my high position across the canyon. These photos can be found in the slide show on this page.

The very spacious parking area, one of the best in the Spring Mountains, can be found on the left (South) side of Deer Creek Road just 4 miles from its intersection with Lee Canyon Road. The short 200ft access road to that parking area is unmarked so watch carefully. The area is gated and the gate doesn’t seem to have any indication of when it is open and when it is closed. That said, I’ve never had a problem being locked in between dawn and dusk.

Taken Off My Original Course

My original goal was the explore potential summit approaches to Mummy’s Head. The first mistake I made was to head up the left ridge of the canyon from the parking area. Next time I’ll go for the right ridge! The left ridge started a domino effect of errors that eventually took me entirely off course and changed the goal of the adventure. First, I quickly emerged from the wilderness and onto the main road to Camp Stimpson. A staff member drove by, stopped, offered a ride and was friendly enough. However, I noticed he drove on then stopped around the next bend, seeming to be watching my every movement. Wanting to remain invisible, I disappeared into the wilderness ascending the main left ridge of the canyon.

However, on that ridge I was confronted by more location signs than I’ve ever seen in the wilderness. There were private property signs mixed with Forest Service wilderness boundary signs. The top of the ridge was populated by homes and “private”, the canyon below was “private” Camp Stimpson property, so I stayed mid-ridge weaving around and attempting to remain on Forest Service Wilderness land. This took me ever further upward. At one point I summited the ridge and found a well established unpaved road with “private, no trespassing” signs. I headed down a bit back to Forest Service Wilderness and finally re-ascended the ridge above the last home.

Arrival at the Very Northeastern Tip of Mummy’s Tummy Cliffs

Now I was near the tip of Mummy’s Northeastern cliffs. Realizing that attempting the Mummy’s Head area would involve a huge descent and re-ascent, I decided to close the loop of last year’s adventure that had ended at this very spot. Unfortunately this day, as I traversed the lower edge of Mummy’s Eastern cliffs, my route was too low and went off course. I found myself descending a steep avalanche slope into a canyon (Delta Canyon aka “The Fingers”) way too low. So I re-ascended that long steep avalanche slope to get back on my familiar higher wilderness course. I never totally made it to the elevation of the familiar wilderness course as I continued to traverse the wilderness area below Mummy’s Eastern cliffs. However, the terrain looked sort of familiar and finally I arrived at a trail. Amazingly, it was Cougar Ridge Trail. And, I found I was only a couple hundred feet below Mummy Springs Trail and only about 1000 feet from Mummy Springs! Amazing how one can connect the dots though the wilderness!

Back on Familiar Trails Two Surprises

The remainder of the adventure was over ground I’ve covered before on established trails. Over to Raintree, up to Fletcher Peak Summit, back to Cougar Ridge Trail and down to Deer Creek Road. There were two final surprises on new ground. Just above Deer Creek Road there is a wonderful picnic area with a little stream…water running in the stream in mid-August. The stream is the run-off from Mummy Springs. I think it’s called Deer Creek at that elevation, that would make sense. The picnic area with 10 or more picnic areas along the stream has children playing, people barbequing. I felt like Rip Van Winkle having emerged from 15-20 miles and a long day in the wilderness into the populated family fun area. That was one surprise.

Next Time: Take the Right Ridge of the Canyon!!

Learnings from this adventure: Next time I’ll stick to the right side of the original canyon and ascend to the base of Mummy’s Head. Once I’ve done that I will know the entire Eastern Mummy wilderness area from Fletcher Peak to Lee Canyon Road. More to come! 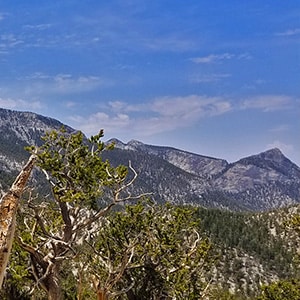