I thought that after Valley of Fire State Park, Red Rock Canyon National Conservation Area and Calico Basin, Bowl of Fire would be a let down. The others are far better known for their ancient Aztec red rock and calico frozen Jurassic era sand dune formations. And the others do have more extensive formations. How could Bowl of Fire in Lake Mead National Recreation Area possibly compare with the more famous locations?

I was totally wrong. Bowl of Fire has a look, spirit and feeling all of its own. First of all, there is a feeling of solitude, peace and connection in Bowl of Fire that is unmatched. During my adventure there on the second Saturday morning in January, I was the ONLY person in the bowl. I had the whole place to myself! You’ll NEVER experience this feeling in Valley of Fire, Red Rock or Calico Basin. I was able to stand in the midst of the Bowl of Fire and do a 360 seeing only the beautiful formations. Note this was a Saturday morning to early noon…usually the highest traffic time…nobody there! Temperature around 60 degrees, skies perfectly clear, the morning sun advancing and changing the color of the landscape with each minute! Why such solitude? Probably because you have to hike about 2 miles to get to the Bowl, there is limited parking and most people are at the more famous locations earlier named.

Second, you can stand in the midst of the Bowl of Fire and see the entire Bowl of those beautiful Aztec formations in one of the most incredible 360 degree vistas available anywhere. And then proceed through a gentle valley to the North surrounded on both sides by more formations. And the formations, though not as huge as the ones in the other parks, still contain many of the features of the others. The red sand you walk on is a reminder of the floor of Fire Canyon in Valley of Fire State Park. There are intricate openings in the rock formations that frame incredible views.

Hopefully you’ll discover the Bowl of Fire before the general public mobs the place!

Enter Lake Mead National Recreation Area via the North Las Vegas Lake Mead Blvd. entrance gate. Along the way you’ll pass the trailheads for Frenchman Mountain and Sunrise Mountain, then pass through the National Recreation Area entrance gate (entrance fee or National Park Pass required). Turn left onto North Shore Road where Lake Mead Blvd. ends. Watch the mile markers as these are often the only indications in Lake Mead National Recreation Area of points of interest. You need to know where the interest points are and at which mile marker. For example, along the way you will pass Black Mesa, one of the most incredible overlooks of Lake Mead in Nevada, only overmatched by Fortification Hill on the Arizona side. No markings, no trailhead indications…you need to know where Black Mesa is.

At mile 16 is Callville Wash North, the first unmarked entrance point. There is an unpaved parking area there and a 4WD road heading North. The 4WD road will get you within about 1.5 miles of the Bowl of Fire. If you don’t have a 4WD vehicle you’re looking at about 2.5 miles, mostly gradual uphill.

Just beyond mile 18 on Northshore Road is the second and I believe, the better entrance point to the Bowl of Fire. It’s a paved turn-out on the left side of North Shore Road that could possibly accommodate 10 vehicles. Look for a small unmarked trail heading off to the West toward the Red Aztec formations in the distance. Those formations are the Bowl of Fire. The little trail is actually very good, and you’ll be standing in the Bowl of Fire after only 2 miles, a good portion of which are gradual downhill!

Trailhead to Circling the First Ridge

A Few Twists and Turns, Yet Trail is Pretty Distinct

Of course, the trail does take some twists and turns along the way due to a couple washes you need to cross. Just watch carefully for signs of the trail, even if it looks like it has disappeared. There are a few cairns (small stacks of rocks), some stones lining the trail to indicate a turn, footprints in a wash where the trail might have momentarily disappeared, evidence of the trail resuming on the far side of a wash. Note that the first 2 washes you cross are pretty much straight crossings, meaning that the trail resumes on the far side of the wash instead of moving up or down the wash.

Traveling Up the Large Wash, Ascending One Dry Waterfall

Eventually you will arrive at the edge of a large wash. You’ll know it because it is about 30 feet deep and about 100 feet wide. There is a pretty distinct green rock vein of copper on the far wall of that wash (see the video and the slide show). Descend into the wash and go all the way to the opposite wall. In this case, do not climb up the far side of the wash. Instead, take a right and begin heading up the wash. You will see markings of a trail continuing up the wash.

The wash will wind around slightly to the left and the Bowl of Fire will again come into view. Just stay in the wash. There is one dry waterfall (about 10-15ft high) that you will need to climb over. The best place to navigate the waterfall in on the very left, above the wash. It’s not real obvious, but you can wind around the rocks there without climbing. I found that passage on the return trip. However, since it was not obvious from below on the approach trip, I took the brief class 3 climb more toward the right side of the dry waterfall. It was a bit difficult, but not enough to be a major problem. The rocks were pretty smooth due to many people ascending in that spot and the handholds were shallow. However, there was always a way to wedge yourself against the rocks on either side and slither your way up! There was never a large exposure to fall.

Entering the Southern Bowl of Fire

Once on top of the dry waterfall, continue up the wash. The going is easy, but the red sand is deep in places and fills your shoes! The wash will angle a bit to the left just before you arrive in the bowl of fire.

Continue to a high point on the right side of the wash. There you can do a 360 degree turn and see why they call it the “Bowl” of Fire. It’s a pretty distinct bowl.

Amazing Solitude in the Southern Bowl of Fire

On my first trip I never saw another person the entire day, so the solitude was incredible! From the high point in the middle of the bowl I took a route to the right toward the Northern end of the Bowl of Fire. The little shrub covered valley between majestic walls of Aztec red rock has a unique beauty and feeling all of its own. It’s like a little enclosed desert valley world.

Great Value Compared to the Time and Mileage

Quick note: Don’t imagine from my extensive description that the Bowl of Fire is a long hike! It’s actually just 2-3 miles from the trailhead – each way! The hike is relatively level and easy. When you compare the value of what you see in such a short distance, this adventure gets more bang for the buck than many other much longer adventures. 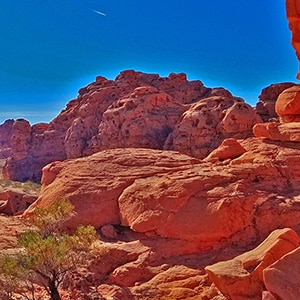 Article Name
Southern Bowl of Fire | Lake Mead National Recreation Area, Nevada
Description
You can stand in the midst of the Bowl of Fire and see the entire Bowl of those beautiful Aztec formations in one of the most incredible 360 degree vistas available anywhere.
Author
David Smith
Publisher Name
LasVegasAreaTrails.com
Publisher Logo