Tread lightly. Many precious souls have walked where you stand, and the very ground is holy.

Entering Valley of Fire State Park is like entering into another world and the fiery red Azetc sandstone formations sharply contrasting against their gray and tan limestone mountain background create a fantasy-like atmosphere. Over countless years wind, water and sand have created a myriad of shapes and designs beyond all human artistic genius. And there is a spiritual feeling in the valley I have only experienced in few places on earth. This is a place you can touch, experience and even enter the very rock of the earth and feel an energy that is at times overpowering.

Sharpen your senses, be still and extend your ability to listen and to feel. Take a moment just to experience the colors. Then, focus on the shapes. Then on your feelings.

Don’t allow geological history and scientific explanations to eclipse the wonder of this place, but it’s also good to know how the rocks were formed. The dark gray rock is between 550 and 250 million years old, from the Paleozoic Era when plants first became widespread and the first vertebrate animals began to colonize the earth. These same rocks were there throughout the Mesozoic Era 250 to 66 million years ago, when dinosaurs walked the earth. During this time the sand dunes froze into the Azetc red and white hills which the winds, rains, flood waters and blowing, cutting sands shaped into so many elaborate and wonderful designs. An ancient sea bed was thrust upward in places along with the fossil remains of its early inhabitants.

Sediment and wind gradually formed layers in the rock which are clearly seen, the Beehive formations at the West entrance of Valley of Fire Park being a primary example. As the winds and blowing sands etched away the hills, huge chunks of rock fell and remained standing in place as the surrounding ground eroded away creating natural arches and balancing rock formations that appear to defy the laws of gravity. Entire valleys of fiery red spires point upward, refusing to give up their high position to the eroding forces of time.

This all forms a book that you can spend entire days reading over and over, at every moment making a new discovery.

A lot more can be said and I encourage you to take time to view the vivid, well-designed geological history displays at the Valley of Fire State Park Visitor Center.

However, take some time to bypass your brain to directly experience the wonder of the rock formations first-hand beyond the understanding of mind, intellect and words. 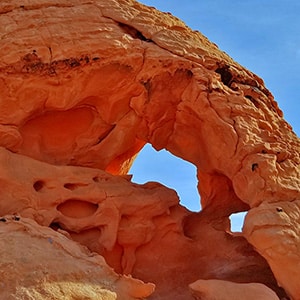