Gass Peak by the route I take beginning at the North end of Rainbow Avenue in Las Vegas is an ultra-marathon of about 30 miles with a 5000ft elevation gain. On top of that, the final 2-3 mile traverse from the mid-summit to the true Eastern summit, which I refer to as The Gass Peak Gauntlet crosses difficult avalanche slopes when you’re at a point of near exhaustion. For this reason, as of the writing of this article I have made 9 attempts only to end up about 400ft elevation and 1/4th mile short of the true summit. During these attempts I’ve gradually pieced together a best route, always believing that the next attempt will achieve the summit. Three of the closest attempts were stopped by a wrong turn up to a cliff dead-end, snow and zero visibility. But each trip created its own unique adventures.

I’ve separated the Gass Peak pages into 2 pages. This page is for all those attempts that end shy of the true summit. The first video on this page shows the best route to the mid-summit, but this first summit attempt in the Fall of 2019 was stopped by a rare snowfall shy of the true summit. In addition, it was a rather hazy day. Some of the videos below actually show parts of this and other trips on even clearer days including lower canyons and ridges on the West side and a trip to the Western summit. Another page will be created on the day I actually make the true summit of Gass Peak!

The view of Las Vegas from the summit ridge is pretty awesome. You’d need to be in an airplane approaching Las Vegas from the North to get this kind of view, and then you’d be confined to looking out a small window. Out in the open on the summit ridge your 360-degree view includes Las Vegas to the South, Red Rock Park Canyon National Conservation Area to the West along with La Madre Mountain Wilderness and Mt. Charleston Wilderness, the Sheep Range to the North and Lake Mead and Valley of Fire park to the East.

Getting to the Trailhead to Gass Peak Mid Summit Ridge, Nevada

The route I take begins at the Northern end of Rainbow Avenue in Las Vegas. There is a small parking area that accommodates about 3 vehicles and is seldom full. Another route involves traveling up I-95 North of Las Vegas to the Corn Creek exit, passing the Desert National Wildlife Refuge visitor center, taking unpaved 4-wheel drive roads to a trailhead below the true summit and ascending a 4-mile trail to the summit. I believe that for a trail runner I can get to the summit from the Rainbow avenue starting point in about the same amount of time it would take to get to the summit driving up I-95, then traveling the unpaved roads to the DNWR trailhead. But the Rainbow route is a pretty demanding 30-mile ultra-marathon round trip!

North End of Rainbow Blvd to Powerlines and Washes

From the North end of Rainbow Blvd, head straight for the passage between Gass Peak on the right and Castle Rock on the left. You’re crossing the open desert with no trails. The surface is very rocky so watch the video for tips on shoe wear. Along this part of the route you’ll pass a drainage channel, some power lines, a large wash that becomes Tule Lake Fossil Beds to the West (which are at the North end of Durango Blvd), and a couple dirt roads.

The gradual ascent slope begins shortly after the above features. The next feature is a fence composed of wooden poles and cables. This is the boarder of the Desert National Wildlife Refuge, the largest refuge in the Lower 48 States. It was created to protect the Big Horn Sheep which inhabit the Sheep Range to the North of Gass Peak. The plant life dramatically changes as you ascend from just a few scattered creosote plants to a creosote forest to the emergence of large yucca plants and huge barrel cacti along with a few other cacti species to a beautiful Joshua tree forest in the pass between the two mountains.

About half way up the slope to the passage between Castle Rock and Gass Peak you’ll encounter an unpaved road that is used only for maintenance vehicles and closed to motorized traffic. Yet this road, a welcome respite from the desert rock and wash surface, takes you through the passage and on around the North or back side of Gass Peak to what I call the mid-North summit ridge approach canyon.

Ascent to the Mid-Summit Ridge of Gass Peak, Nevada

Once through the passage take a right and continue along the North or back side of Gass Peak for 1-2 miles, then take a right and head up the Gass Peak mid-North summit ridge approach canyon. After about ¼ mile along a very loose gravel pathway the route ascends straight up a steep avalanche slope to the mid-summit of Gass Peak, the view of Las Vegas suddenly opening up before your eyes.

Ascent to the Eastern Summit from the Gass Peak Mid-Summit Ridge, Nevada

The summit of Gass Peak is actually a 5-8-mile-long ridge with a Western, a Mid and an Eastern Summit. At the mid-summit ridge, take a left and head East to the true summit. I refer to this stretch as The Gass Peak Gauntlet. You’ll be encountering The Gass Peak Gauntlet when your energy has been drained due to the approximately 14-miles with 4,000ft elevation gain you’ve just accomplished to get to the Gass Peak Mid Ridge. Now you’re faced with a final stretch of about a mile with another 1,000ft elevation gain, but that’s not all. There’s more! You’ll be crossing some very steep avalanche slopes with cliff drop-offs below and no clear route. Avoid the temptation to ascend the large bluff on the right midway to the Eastern summit. It ends in a dead-end cliff. Skirt the bluff on the lower left or North side, then take the rise to the summit. This Gass Peak Gauntlet is pretty treacherous when covered with snow. Crampons or some other form of traction and an ice axe are strongly recommended. As of the writing of this article I’ve made it about half-way through the Gass Peak Gauntlet.

I can’t yet speak for the final 1/4th mile 400ft ascent to the Eastern summit because in the Spring of 2019 I was side-tracked up the bluff to a cliff dead-end and totally out of energy. But looking down on the final stretch from the upper East side of the bluff, the route looked very possible. See the final 2-3 videos in the section below entitled “Less than Half Mile from Eastern Summit, Only 500ft Below Stopped by Cliff” for this closer view of the final route to the summit. The Eastern summit is topped with radio towers and equipment that has been flown in by helicopter. I’ll create a separate page for the entire successful adventure once I reach the Eastern summit.

Alternately, after topping the mid-summit ridge take a right for a much easier traverse to the Western summit with an awesome view of the Spring Mountains, La Madre Mountain Wilderness, Damsel Peak and all the way to Mt. Wilson on the West side of Red Rock Canyon National Conservation Area. See the final 2 videos below in the section entitled, “Gass Peak Western Summit, 5,900ft” for views from the Western summit, including views of the surroundings on a clearer day than the day the main video at the top of this page was filmed. 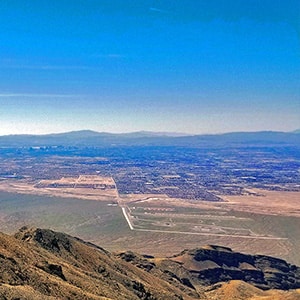 Article Name
Gass Peak | Mid-Summit Ridge | Las Vegas, Nevada
Description
Gass Peak by the route I take beginning at the North end of Rainbow Avenue in Las Vegas is an ultra-marathon of about 30 miles with a 5000ft elevation gain. To stand on any of the 3 Gass Peak summits is like looking straight down into Las Vegas from an airplane!
Author
David Smith
Publisher Name
LasVegasAreaTrails.com
Publisher Logo