Eureka Mine and its supporting mining town, Harrisburg (Aguereberry Camp) and Cashier Mill were founded by Pete Aguereberry and Shorty Harris in 1905. “Pete” Jean Pierre Aguereberry, born in 1874 to a Basque family in France, had a childhood dream of discovering gold in California. In pursuit of that dream he sailed to America in 1902 and made it to Death Valley in 1905.

Shorty Harris was the famous colorful prospector who, in 1904, discovered the Bullfrog mine which gave rise to the town of Rhyolite on the East side of Death Valley near Beatty. In 1905 he discovered gold in the Panamint Range on the West side of Death Valley along with Pete Aguereberry, establishing the Eureka Mine. Pete and Shorty established the mining camp town of Harrisburg where they managed an operation involving 300 men extracting gold valued at as much as $500 per ton.

Cashier Mill, built in 1909, utilized gas power to extract gold from the ore hauled from Eureka Mine, first pulverizing the ore, then using mercury and cyanide to extract the gold. Gold from the Eureka Mine sustained Pete Aguereberry for 40 years. Historians estimate that Aguereberry extracted about $175,000 worth of gold (then valued at $20 per ounce) from Providence Ridge until his health began to fail in the early 1930’s. Pete Aguereberry died on Nov 23, 1945.

Pete’s original cabin, built in 1907, still stands at Aguereberry Camp. There are a group of 3 cabins: The cabin on the right was Pete’s cabin, the middle cabin a guest cabin and the cabin on the left was of unknown use (however, note my guesses below). Pete’s cabins are near the now sealed off Eureka Mine. You can still see ore cart tracks running into the mine.

Additional points of interest in the Panamint Mountain Range:

From Las Vegas take Hwy 190 through Pahrump. Continue on 190 through Death Valley. Pass Furnace Creek and Stovepipe Wells. Turn left at Emigrant Campground onto Emigrant Canyon Road. In 11.8 miles you’ll see a well marked sign indicating a left turn onto an unpaved road to Aguereberry Point. In less than 2 miles you will reach an unmarked fork in the road. The right fork leads to Eureka Mine, Cashier Mill and Harrisburg (Aguereberry Camp). The left fork continues for another 4-5 miles to Aguereberry Point. It’s a washboard road, so prepare to be shaken up. The last quarter mile to the Aguereberry Point parking area is pretty rugged, even for a 4WD vehicle. Take the trail to the north of the rock outcrop at the parking area for the most expansive view. Pete called it “The Great View”.

Beginning where the unpaved Aguereberry Point Road branches off to the left from Emigrant Canyon Road I parked and traveled by foot. This gave me more of the experience that the original explorers may have felt vs. being in a motor vehicle.

The unpaved Aguereberry Point Road all the way to Aguereberry Point, being recently re-graded on this day was passable for 2WD vehicles with powerful motors and excellent tires. However, the road will again degenerate over time, so beware. There the road to Eureka Mine branches off to the right about 2 miles up. It’s unmarked, but the only off-shoot road from Aguereberry Point Road, so it’s hard to miss.

A little more obscure is an old closed road just before the turn-off. Being on foot I took that old road, which turned out to be Pete Aguereberry’s approach road to his cabin area just about 100 yards up.

Pete Aguereberry who, along with Shorty Harris, discovered gold in Providence Ridge in 1905, built 3 cabins at the base of the Ridge. In the video on this page I conduct an extensive walk-through Pete’s 3 cabins. There is an interpretive sign immediately in front of the cabins. The cabin on the right is thought to be the cabin in which Pete himself lived until the 1930’s. There is running water in all three cabins, electricity, fixtures for lights, a sinks, showers and even toilets. There are also refrigerators, stoves and sleeping quarters including beds with springs. The windows include glass panes. These features probably evolved over time as seen by an older rustic 2 toilet outhouse behind the cabins. The cabin in the middle is a more elaborate guest cabin with multiple rooms and all the amenities a guest would have needed. I estimate that the guest quarters could have comfortably accommodated over 10 guests. Perhaps the quarters housed some of the workers who helped Pete continue mining Eureka Mine from when the larger community of Harrisburg was abandoned around 1911 until Pete stopped working the claim in the early 1930’s. The third cabin (on the left) contains a refrigerator or freezer, a bench, storage area and may have been used for storage purposes. It’s unclear, but the windows with panes of glass indicate that it could have also been used for living quarters. You’ll get a better idea in the video walk-through.

Behind and just above the cabins there is a well-constructed level area that would have been perfect as a garage for what looks like Pete’s fine automobile, which can still be seen a couple hundred feet beyond the cabins.

Pete Aguereberry’s Automobile and Eureka Mine

After passing the automobile there is a mine opening, then just around the corner the larger Eureka Mine. Protruding from the mine are the iron tracks for an oar cart that can still be seen at the base of the mine. The tracks continue deep into the mine. As the entrance is blocked off, I included in the video and slide show images a look into the mine, as far as possible. At the mine entrance are a few old dry timbers holding up the entrance. The wood looks as if it could be easily broken loose by a curious wanderer accidently brushing against it, potentially bringing the roof down!

Continuing around the base of Providence Ridge beyond the mine, there is a small rock storage area (possibly spare parts for the equipment) and just beyond that, Cashier Mill comes into view, built down the side of Providence Ridge. Cashier Mill was gas powered and, being build on a hill, must have contained a chute down which raw oar was sent to be crushed and then run through cyanide and mercury to extract the gold. You’ll see a similar mill in the Skidoo area which, instead of gas, was powered by water piped 23 miles from a spring on Telescope Peak.

In the video I conduct an extensive walk-around Cashier Mill and then ascend to the summit of Providence Ridge for a more expansive view of the area including the site of the town of Harrisburg below, where 300 mine workers once lived between 1905 and when the town shut down in the mid-1910s. The only remaining evidence of the town are the faint outlines of roads that once existed there. As construction materials in the region are virtually non-existent, all the buildings of Harrisburg, Skidoo and so many other mining ghost towns were thoroughly scavenged until nothing remains left today.

Reaching Eureka Mine by Road 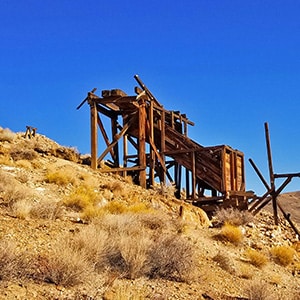