Adventure to occur soon during Winter

Anniversary Ridge, the highest overlook point in its area on the Eastern border of the Muddy Mountains Wilderness, offers a spectacular aerial view of the Bowl of Fire, almost immediately below, and views all the way to Lake Mead. Ascending Anniversary Ridge involves a rather involved unmarked approach route and finally, traversing a very narrow ridge with dramatic drop-offs on either side. But it’s great fun all the way!

Due to excessive heat from late Spring to early Fall, the best time to explore Anniversary Ridge is from Late Fall to Early Spring. 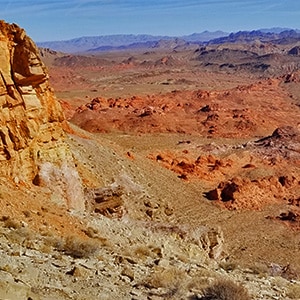