Fire Canyon in Valley of Fire State Park, Nevada is, as the name indicates, a canyon of fiery red rock formations both forming the canyon walls and throughout the canyon. As you pass through the canyon, you’re for the most part walking on a thick layer of beautiful red sand. Nearly every amazing red rock formation seen throughout the park can be seen in Fire Canyon including pinnacles, bee hive formations, balancing rocks, arches and shallow caverns. I did not see petroglyphs here, but neither did I stray from the main channel on this trip. During the first mile or so the sand was marked only by animal tracks. They were mostly small animals. However, there were a few Big Horn Sheep hoof prints.

There are a number of ways to approach Fire Canyon. I entered Fire Canyon by continuing beyond the Rainbow Vista Fire Canyon overlook at the end of the Rainbow Vista Trail. Another approach would be from the Fire Canyon/Silica Dome parking area. This is where I eventually found my way out of the canyon during this initial exploration. A third route would be to enter from the Northeast corner of Valley of Fire Park somewhere off the roads that branch off of Northshore Road. I believe I was heading in that direction when I overshot the Fire Canyon/Silica Dome access point by a mile or so. However, I’ll have to explore this area further at some time in the future. The official Valley of Fire park map has this area blocked out by trail descriptions and when I checked on Google the roads were unmarked. Yet I believe this area is part of Valley of Fire State Park.

This in itself says something about Fire Canyon. There are no official directions so you’re pretty much left to explore the area on your own, hopefully with a good topographical map! I’ll return to the Northeast corner of the park at some point for further exploration.

For the most part, after descending beyond the Rainbow Vista Fire Canyon overlook the route is fairly easy to traverse with the main channel pretty well marked by a deep pathway of red sand. It’s like walking on a sand dune most of the time…the sand is that deep.

The canyon very gradually descends except in a few tricky places where you need to figure out how to bypass cliff-like barriers. For the most part the passage way through these barriers can be found by circling the obstacles on the far right. I almost turned around a few times and gave up until I studied the problem areas further and found a way through.

First Fork in the Main Channel of Fire Canyon

You should not need to ever descend a cliff. The passage ways I found never required lowering myself more than 3 or 4 feet down boulders and shallow walls. I was never in a position where I feared slipping and injuring myself. About 2/3 of the way there is a split where you could take a right or a left. This is the first real place that I found myself asking which way to turn. Had I looked more carefully I would have realized that that white rock I saw in a 10:00 direction was Silica Dome and a good exit point.

However, I decided to continue down the main channel, and the correct way to do this was to stay to take the right branch. Curiously, at this point there was evidence of a lot of foot traffic whereas at the beginning of my canyon adventure there was no evidence of foot traffic for at least a mile or so. A lot of people seemed to be entering the canyon from below. There’s probably a main entrance point down toward the bottom.

Most of the time while in the canyon the central channel was pretty evident. Continuing on, the most challenging or puzzling obstacle offered a huge drop-off on the left and in the central channel. When I further explored ascending to the far right up an incline outside the main channel I noticed a few cairns marking a path. Following these and circling around to the right, then descending to the left brought me down around the cliff and back onto the main channel.

Overshooting Silica Dome, then Retracing My Way to the Dome

Here is where I was overshooting the Silica Dome exit point. I met a couple hikers further down and found that the white rock I had passed earlier was indeed Silica Dome. So I ascended back up the canyon and headed for the white rock, eventually circling around the right side of Silica Dome to find the parking area. From there it was a fairly easy 1-mile run back down to White Dome road where I turned left then shortly found myself back at the Rainbow Vista parking area.

The video is instructive in that I did not know the route through the canyon or exactly where I was at any given point, and had no prior point of reference since this way only my second trip to Valley of Fire Park and my first time in Fire Canyon. Throughout the video I’m using deductive reasoning and trail wisdom to find my way along. How I reasoned things out may be helpful. Just for fun, I decided to remain in the canyon rather than ascending to a higher place for reference points. I wanted to follow the logic of water and its direction of flow. In a way, I enjoyed not knowing exactly where I was, which made the whole experience more mysterious and magical.

However, apologies for, in the video, mistakenly calling Silica Dome White Dome! As I said, I was not exactly sure where I was until I finally exited the canyon.

In my favor, it was early January. The experience would have been far different in the heat of the Summer. However, all my wilderness adventures are at much higher elevations during the hot Summer months, which is a basic wilderness technique that helps keep me safe! Conversely, I’m not up at 11,000ft in the Mt. Charleston Wilderness at this time of year plowing through snow and risking white-out conditions. 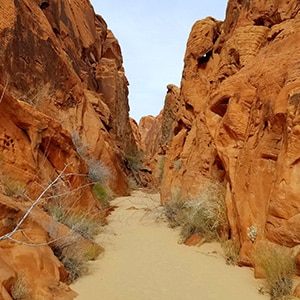