If you’re looking for a summit approach in the Spring Mountains with expanding non-stop spectacular views all the way to the summit after the first brief 1/8th mile, Black Rock Sister is unbeatable. Views during this adventure will include Mummy Mountain, Lee Peak and the upper ridge of Kyle Canyon spanning the distance between these peaks. You’ll also see Charleston Peak, The Sisters North and The Sisters South, McFarland Peak and Bonanza Peak along with the ridgeline of the Bonanza Trail. Macks Peak, the Sheep Range, Gass Peak, the Northern Las Vegas Valley, and Angel Peak will also be visible as you near Black Rock Sister. And there are many additional points of reference in the distance beyond in all directions.

Elevation and Position of The Black Rock Sister

Black Rock Sister, elevation 9,668ft, in the Lee Canyon area of the Spring Mountains in Nevada is the little-known orphan of the more popular and noticeable South and North Sisters. Sitting on a high point in its ridgeline, Black Rock Sister appears to be composed of a single solid mass of rock around 60ft high and 150ft wide.

The best approach to Black Rock Sister is a ridge with a very steady rate of incline throughout it’s approximate 1,500ft ascent with negligible incline variation until its final 200ft. This means that the return trip is literally downhill all the way. It therefore makes a great conditioning workout for altitude, strength and endurance.

If you want to add to the adventure, the larger North Sister and South Sister sit on the same ridgeline only about 1/4th mile South of Black Rock Sister. All three Sisters are fairly equally distanced about 1/4th mile apart.

From the parking area, head up Lee Canyon Road and take a right (West) up a gully wash just before 5690. This is where I headed upward. One gully about 150ft earlier may have been better because the great ridge that takes you all the way to the summit is on the North (right) side of the earlier gully.

Expanding Views of the Eastern side of Lee Canyon

Once you’re on the ridge, the views of the opposite side (East side) of Lee Canyon immediately begin to open up and quickly expand. Immediately visible are Mummy Mountain, Lee Peak and the upper ridge of Kyle Canyon stretching between. One can scope out various approach routes from the base of Lee Canyon to the upper ridge of Kyle Canyon opening up approaches to Mummy Mountain and all the peaks along the North and South Charleston Loop trail. Direct approaches from Lee Canyon to Mummy’s Head and Lee Peak are also visible.

Terrain on the Approach Ridge to Black Rock Sister

The approach ridge to Black Rock Sister is steady and fairly gradual all the way to the upper saddle between Sisters North Peak and Black Rock Sister. There is little loose rock or steep incline until the final 150ft to that upper saddle, and the terrain is wide open making it easily possible to weave through the trees without having to navigate brush anywhere on the ridge.

Easy Jog to the Ridge to the Right (North)

Near the summit of the approach ridge you want to make an easy jog over to the next ridge to the North (right) in order to complete your ascent to the upper ridgeline for the Sisters. This will land you at a high point immediately between the Sisters North and the Black Rock Sister. From there you can easily navigate a shallow saddle to the South (left) for the Sisters North or a shallow saddle to the North (right) for the Black Rock Sister.

Evil Ridge to the North of the Black Rock Sister Approach Ridge: Do Not Descend This Ridge!

Simple enough? Yet here is where I made a mistake on the return descent that I had actually warned against in the video during the ascent! Go figure! As you’re ascending the Disney Land wonderful gradual, open approach ridge I’ve been describing, you’ll notice a disturbing, evil ridge to the immediate right (North). That ridge ends in a rocky drop-off and has long, steep avalanche slope sides. It’s clear that if you were descending that ridge you’d be in for a wild ride.

Remember that easy jog to the right near the summit of the awesomely nice approach ridge. That little jog easily puts you on the evil ridge to the right (North) far above the evil area not far from the summit saddles to the Sisters North and the Black Rock Sister. Here’s the rub: On the return descent, if you miss that little jog just below the summit saddles (on the return this is a jog to the good ridge on your right (South), you will continue down the evil ridge eventually ending up at the rocky drop-off and realize you now need to descend a monster avalanche slope which, best scenario, will land you in a gully that will eventually take you to a point on Lee Canyon Road requiring a over a half mile uphill backtrack up that road to return to your starting point. It’s easy to make this mistake on the return trip. I made the mistake!

Let’s return our thoughts for now to the easy jog you made on the approach trip to the ridge on your right, above the evil part. Once you begin ascending that ridge watch for a huge, incredible rock arch formation on the right (North) side of the ridge. A couple additional rock pillars will become visible on the same ridge above the arch and your destination, Black Rock Sister, is now fully visible.

Continue past the rock formations to arrive on the upper saddle.  The Western view now opens up including McFarland Peak, Bonanza Peak and Macks Peak and distant points beyond including the Northern Highway 95 corridor. In addition, to the Northeast appear the Sheep Range, Gass Peak and the upper Las Vegas Valley, including points beyond. Charleston Peak is now visible along with Lee Peak to the Southeast and the Spring Mountains stretching to the South.

Arrival at The Black Rock Sister 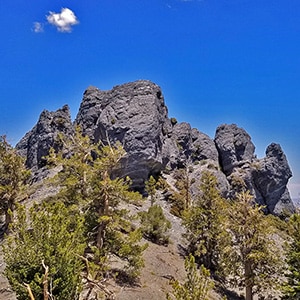