Windy Peak in Nevada is the Southernmost peak in the Rainbow Mountain Wilderness and a good jumping off point to explore the Wilson Ridge which borders Red Rock Canyon NCA to the East and Lovell Canyon to the West. The Wilson Ridge continues North and eventually tops out at Harris Mountain in the Mt. Charleston Wilderness. About 15 miles to the South of Windy Peak is Potosi Mountain, the Southernmost peak in the Spring Mountain Range.

Windy Peak is one of the Rainbow Mountains beautiful Jurassic Era Aztec red rock frozen sand dunes similar to the famous formations in Red Rock Canyon National Conservation Area. To stand in that place is to be surrounded by the artistic beauty of red and white rock with occasional bonsai-like pine trees.

The views from Windy Peak are pretty incredible including a good portion of the Rainbow Mountains – Mt. Wilson in particular standing out – the La Madre Mountains, the Las Vegas Valley with Frenchman Mountain, Sunrise Mountain and the Muddy Mountains as a backdrop, the Black Mountains in Arizona with the faint line of the other Mt. Wilson in Arizona, and Potosi Mountain huge, directly to the South at the Southern tip of the Spring Mountains. There are other reference points yet to be visited to the Southeast.

The round trip to Windy Peak from the Mountain Springs Trailhead on Highway 160 is a little over 5 miles with an ascent from 5,470ft to 6,238ft.

The best time of year to hike, run or otherwise ascend Windy Peak is Fall through Spring. Summer temperatures can exceed 100 degrees.

Take I-215 to the Charleston Blvd. Exit in Summerlin, then head upward toward Red Rock Park. Pass Red Rock Park, continuing on Hwy 159. Pass the town of Blue Diamond, then turn right onto Hwy 160 toward Pahrump. Hwy 160 will ascend upward to a high point just before the town of Mountain Springs. Around that high point park at the Mountain Springs Trailhead on your right. The trailhead has no marking and is a hard right turn off Hwy 160 onto a dirt road and into an area that looks like an unimproved campground with scattered areas to park. If you are the first to arrive in the morning it’s not obvious that you are at a trailhead. To make the Mountain Springs trailhead even more difficult to recognize there is a large sign at the entrance “Residential Use Only”.

Once you have successfully located the Mountain Springs Trailhead, your next challenge is to locate the unmarked trail to Windy Peak.

If, on the other hand, you took the road to the right of the Mountain Springs Trailhead, that road ends in a few hundred feet, but you can see the communication tower from that point and head cross-country on a faint use trail directly to the tower.
From the Communication Tower to the Upper Ridgeline

Once you reach the communication tower, just continue around the gate blocking the road to find the true beginning of the very good trail to Windy Peak.

Now your point of reference is the ridgeline you see to your right (Northeast). The trail will rise to the top of that ridgeline and continue above the rainbow mountains, all the way to the familiar Mt. Wilson, Rainbow Mountain and Bridge Mountain of Red Rock Park.

However, you want to take an unmarked right fork off that trail in about 100 yards or so after toping the ridgeline. That right fork will lead down to Windy Peak.

Back to the Windy Peak approach split off trail: After you take the right fork off the main ridgeline trail, within another 100ft or so there will be one final right turn. Take this right turn and precede about ½ mile down to Windy Peak.

Navigating the summit slope is an act of weaving around rocks and through small channels. Turn around often to get an idea of how you will return to the trail. On the return trip to the trail, you want to stay on course because veering too far downhill will lead to a cliff drop-off. So, look back often. The hill you descended before reaching the base of Windy Peak is a good reference point for the return trip through the maze of rocks and channels.

Back to your ascent of the Windy Peak summit slope: As you ascend (and later descend) keep to the upper (East) edge of Windy Peak. Watch for a few cairns. However, the cairns tend to disappear when you need them, so just keep to the upper edge of Windy Peak. In a short time, you will reach the summit. Look to the video and slide show on this page for a visual of the summit approach route.

The Roaring Wind on Windy Peak!

On the day I was there, Windy Peak lived up to its name in a big way! I was nearly blown off my feet a few times, so be careful not to veer too close to the edge of the upper cliff. The wind wanted to blow me off the cliff and over to the Las Vegas Strip! In addition, the wind overcame my mic muffler system at times.

Once on the true summit, enjoy looking around. The view is incredible. In addition, the artistic placement of scattered lone bonsai-like pine trees against the backdrop of the Aztec red rock is amazing. After a few roaring windy moments on the summit, you might want to descend to a rocky formation South of the summit where things are quieter and it’s possible to rest in a calm spot.

Finally, retrace your way back up the summit ridge and then back down to the trail at the base of Windy Peak. If you looked back a few times during your earlier ascent to get the lay of the land, your return trip to Windy Peak base should be relatively flawless. On this day I missed the class 3 crack I had ascended and instead descended a steeper crack just 20-30 feet West. Not a big problem as the crack was so narrow, I was able to wedge myself in it to keep control of the descent.

Once on the main trail again, your return is easy. Just retrace your route back up to the ridgeline, take a left, follow the ridgeline for 1000ft or so, then descend to the right. At this point you can see that communication tower landmark. The Mountain Springs Trailhead where you began is less than 1/4th mile below the tower. 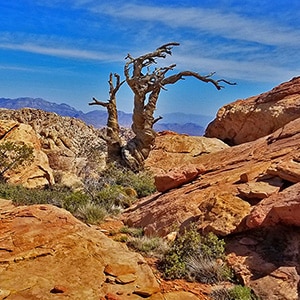 Article Name
Windy Peak | Rainbow Mountain Wilderness, Nevada
Description
Windy Peak in Nevada is the third peak from the South end of the Rainbow Mountain Wilderness and a good jumping off point to explore the Wilson Ridge which borders Red Rock Canyon NCA to the East and Lovell Canyon to the West.
Author
David Smith
Publisher Name
LasVegasAreaTrails.com
Publisher Logo