Also in view are lower Lee Canyon the Sheep Range, Gass Peak, La Madre Mountain and all the wilderness areas in those directions.

The wilderness area itself is largely untouched, unexplored pristine ancient Bristlecone Pine forests on avalanche slopes along the massive lower edge of the Mummy Mountain Eastern cliffs. The visual combination of these ancient trees and incredible rock formations make this adventure unforgettable. One has the feeling of walking on sacred ground that few have traversed.

Realize that you will be completely on your own with no trail for the majority of this adventure, so prepare and conduct yourself accordingly.

The trailhead is the official North Loop Trailhead. See the trailhead directions on the Fletcher Peak/Raintree page on this site.

From the North Loop Trailhead to the Off-Trail Wilderness

Head up the North Loop Trail, pass through a beautiful plateau with spectacular views, ascend what I refer to as “Planet Switchback”, a series of about 14 steep switchbacks, take an obscure fork to the right to an incredible overlook, head down past the Fletcher Peak cutoff trailhead, continue down to Raintree, turn right and past the base of Mummy Springs the head into the wilderness at the first main switchback after Mummy Springs. I realize these directions are in shorthand, but they are described in better detail in the video on this page and on the Mummy Mountain Northeast page on this site.

From the Off-Trail Wilderness to Delta Canyon (aka “The Fingers”)

Now it get’s interesting! When you first leave the trail your goal is to parallel a the Eastern Mummy Mountain cliffs about 1/4th – 1/2 mile below the cliffs, traversing 3 ridges and 3 washes to get to the far side of Delta Canyon (aka “The Fingers”). Locals call this wash “The Fingers”. I call it “Delta Canyon” because it is composed of 3 washes that originate at the Eastern Mummy Mountain Cliff and converge where you will emerge at a lower point into the canyon. The washes look like an upsidedown river delta.

As you leave the trail and head off trail beyond Mummy Springs angle up the ridge and to the right, eventually crossing the first wash to ascend the second ridge keeping the cliffs on that ridge to your right. You’ll summit that second ridge just to the left of those cliffs, then cross that ridge maintain your elevation along the summit of that ridge, then descend into the second wash, angling a bit to your left on the way down into the wash. Once in the wash you’ll see a large dry waterfall to your left.

Continue through that second wash to ascend the third ridge summiting that ridge just to the right of the cliffs on that summit. Cross that third ridge maintaining your elevation along the summit of the ridge, then descend into Delta Canyon (aka “The Fingers”), angling a bit to your left on the way down. Once in the wash you will see your first full view of the Eastern Mummy Mountain cliffs to your left.

Continue along the base of the Mummy Mountain Eastern cliff until you reach the cliff edge. Make a u-turn there to ascend to a spectacular viewpoint mentioned in the overview on this page and filmed in the video. On this day, though the temperature in the Las Vegas Valley was a whopping 113-118 degrees with not a cloud in the sky, it began to rain at that viewpoint. Rain became a full-fledged thunderstorm with booming claps of thunder. The temperature dropped below 40 degrees with small flakes of ice driven by the wind. Freezing!! This shows how things can suddenly change in the mountains. Fortunately I had a light windbraker jacket in my pack, which saved me. Always prepare accordingly.

The video on this page shows things getting dark up there with increasing clouds. What it doesn’t show is the point I put away my camera and made a dash downhill retracing my steps to Mummy Springs. My philosophy when weather becomes an issue in the mountains has always been to descend rapidly into a friendlier climate zone. I never try to find shelter at a high elevation and wait out the storm. This strategy has consistently worked for me over the past 20 years from the Cascades in the Pacific Northwest to the Hudson Valley Wilderness in the Northeast and now in the Spring Mountains of Nevada. 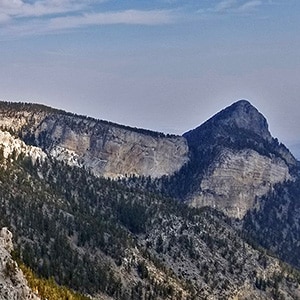