I did have a .pdf document I’d downloaded with detailed directions of a route to Juniper Peak summit. However, I quickly lost any correlation between the document and my actual surroundings, so my trip became very original to me.

In summary, when you are facing Juniper Peak there appear to be 3 routes from the Red Rock Park side: Two narrow chutes to the left and what looks like a more gradual approach to the right. I ended up selecting the middle of these routes – the right chute of the two chutes to the left. Hindsight says that the easier, and likely the more traditional route is the more gradual climb up the slope on the right (just before Pine Creek Canyon). I’m not certain, but this is my best guess given my first 4 hours of unguided exploration.

On the other hand, it seems logical that there are additional routes up the back side of Juniper Peak. There would be a route through Pine Creek Canyon via the left of the two channels divided by Mescalito Pyramid. Additional routes might be accessed via the canyon between Juniper Peak and Rainbow Mountain. By the time I’m done exploring Juniper Peak, I’ll know the entire mountain, then move on to some of the other peaks in the Rainbow Mountain Wilderness!

Juniper Peak in Rainbow Mountain Wilderness – Directions to the Trailhead

There are 2 trailheads in Red Rock National Park that are closest to Juniper Peak:

On this day, I selected the Oak Creek Canyon turn-off. Being that my car, “The Beast”, does not go off paved roads, I parked just off the Red Rock Park Scenic Drive Loop and ran the 1-mile section of unpaved road to the official trailhead parking area. At this parking area there are semi-primitive restroom facilities and two trailheads:

Both trailhead signs give some very common sense cautions to avoid climbing on the 150-million-year-old sandstones that make up the Rainbow Mountains within 2 days of a rainstorm. When these stones are wet, their surface has a traction nearly resembling walking on ice! Also, avoid mid-day Summer adventures in the Rainbow Mountains as the temperatures can often exceed 110 degrees. You’d have to drink so much water that the exertion of carrying all that water in itself would make you thirsty. On those hot Summer days, head up to the Mt. Charleston Wilderness where the temperatures are 40 degrees cooler!

Left Turn Off the Arnight Trail Toward Juniper Peak

After turning left you’ll pass a couple boulders on your right. Continue on until you reach a huge boulder immediately to your right. You’ll see a narrow passage on the upper right side of the boulder that dives down into a wash. The passage is so narrow I had to squeeze to get my backpack through! Take this passage into the wash, and shortly thereafter take a trail on your right up and out of the wash. After rising out of the wash the trail turns left and parallels the wash on your left, continuing to rise along the base of Juniper Peak to your right.

As you look at Juniper Peak, you will see two chutes on the left side and a more gradual slope to the right. I don’t want to get too granular in detail because there are so many rabbit trails splitting off in different directions, and the plant life will evolve and change over time. So, pick your route based on the three unchanging prominent features: The chutes and the slope. I selected the right of the two chutes on this day. There were cairns pointing up in that direction, and the cairns continues as far up the chute as I went. I imagine the cairns will continue all the way up and will verify that on the next trip.

Juniper Peak Via the Middle Route

As you rise up the chute, you’re hugging the cliff on your right and weaving up and through large boulders, through narrow cracks and navigating bushes. Stay as close as possible to the cliff on your right using the cliff as your guiding point. Some of the boulders require short near vertical climbs of about 5-10 feet, but there are enough holds that now climb is an insurmountable barrier, even to this non rock climbing trail runner. By the way, you’re not running at this point unless you have a death wish! Make slow, methodical moves and keep 3 points of contact at all times and you’ll be okay. No real cliff walls and no ropes needed as far as I got.

Remember your route so you can trace it back on the return trip. It’s actually easier lowering yourself down the boulders than it was ascending them, but make sure every move is controlled.

I’ll return to this route when I have more time. And the route itself will take far less time now that I know where I’m going. The trip to my turn-around point on this day took about 2 1/2 hours. However over 35 minutes of that time was spent video recording and a lot of time was spent exploring various rabbit trails in order to locate the best route. The return trip all the way back down to the Red Rock Park Scenic Loop Drive took under an hour! 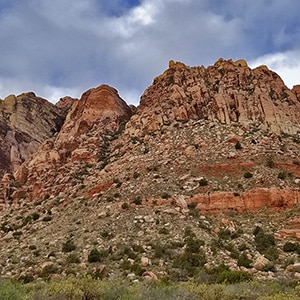