Scroll below to view video documentation.

Bridge Mountain is one of the most popular destinations for hikers and rock climbers visiting of Red Rock Canyon. It offers a variety of challenges from class 3 to class 5 and beyond rock climbing.

The views from Bridge Mountain summit are spectacular, including Red Rock Canyon, the Las Vegas Valley and beyond, the Calico and Brownstone Basins and the Keystone Thrust Cliffs in the La Madre Mountains Wilderness.

Though I have not yet made it to the summit, I have viewed Bridge Mountain from above on North Peak and the Rainbow Mountains Upper Crest Ridgeline

The best time of year to summit Bridge Mountain is during the Fall or Spring months. Summer temperatures can rise to around 100 degrees. Winter can bring ice and snow, turning the smooth ancient Jurassic Era frozen sand dunes that make up Bridge Mountain into treacherous slick icy surfaces with huge vertical exposures.

I have descended to the base of Bridge Mountain, but not yet begun the ascent to the summit. That will happen soon. 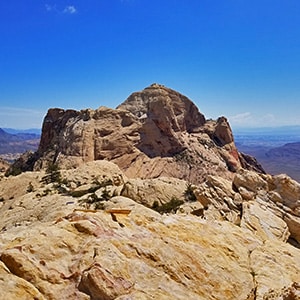