Thus far, the summit of Mummy Mountain’s Head has been illusive. On the East side it is surrounded by sheer cliffs. I have not yet checked out the South, North and West sides. Even so, the Eastern approach described in this article offers unique and spectacular views of the entire East side of Mummy Mountain from Head to Toes, along with Cougar Ridge and the North Loop Trail Ridge including Fletcher Peak in the background. La Madre Mountain, the Mt. Charleston Observatory and the Sheep Range are clearly seen along with glimpses of Centennial Hills. And, further exploration may uncover an approach to the summit by skirting the base of the cliffs until an opening is found. No promises!

As you’re traveling Deer Creek Rd., about half way between the North Loop Trailhead and the intersection of Lee Canyon Road, there is an obscure, unmarked unpaved road on the left. Just because it was there, I decided to take it. Bonanza!! Within about 100 feet and around a corner hidden from Deer Creek Road there is a huge parking area that could fit 50-100 vehicles! It’s clearly a U.S. Forest Service managed road and parking area. Very well graded and well kept. There are no trailheads, but this turns out to be a great jumping off point to Mummy Mountain’s Head area and the Northern Rim of Mummy Mountain’s Mid-section.

At the end of the parking area a very well graded unpaved road continues upward. Within about 200 feet there is a split to the left. I did not take that road this time around, but stuck to the better graded right fork. I was on foot. The road continues to wind upward, definitely one of the best graded roads in all of the Spring Mountains. Just before it dips downward, you have a choice. You can head down, or leave the road and head up the ridge (no trails…just wilderness) to your left. In the future, I will choose the left ridge. Here’s why:

On this day, I continued on the excellent road. Shortly after dipping down, the road ends at the entrance to probably one of the most, if not the most elaborate, modern camps anywhere on the planet. It is Camp Stimpson, an LDS youth camp. I estimate the sleeping quarters, stadium and other facilities could accommodate hundreds of youth…at least 200. The camp is often active, which is why I would select the wilderness ridge instead so as not to disturb camp activities by being a stranger wandering through a youth camp!

However, on this day, I passed through the entrance arch and headed up a stairway on the left that ended in a platform and a trailhead. I took the trailhead, passing above the 1/4-1/2 mile long camp complex winding its way up the canyon.

The trail, obviously roughed out across an avalanche slope by a crew of volunteers with picks and shovels, continued skirting the mid-section of the left ridge of the canyon until it eventually landed just beyond and above the camp complex. As a note, on the return trip I took the top of the ridge, which it is best to summit about mid-way down the avalanche slope trail, after dipping down into a wash and re-ascending to the next ridge…this is the ridge you want as your main route, totally avoiding the camp complex.

Okay, back at the place where I left off, above the summit of the camp complex. There are wilderness signs here and a very very faint, old, unused trail continuing up the right side of the canyon wash…you really have to be piecing this together through the forest using your best trail detective skills. There were still a few ribbons on trees marking the route, but don’t count on the ribbons or on following the trail. Use your best deductive reasoning to imagine where a trail should be, and you’ll stay on track.

Along the faint trail there are some curious 1-foot-high green markers. One says “Pine”…whatever that means. Another says, “Red Rock Stake Super Hero Girl’s Camp Trail“. That spiked my curiosity. I pictured a bunch of camp kids pretending to be super heroes and imagined myself a super hero on the super heroes trail. Wrong!!! When I did an internet search on the label, images of Olympic level athletic women appeared scaling sheer cliffs in the Red Rock area. Pretty amazing if the internet pictures refer to the, “Red Rock Stake Super Hero Girl’s Camp Trail” on the trail sign! Some of the images are on the slide show on this page.

Eventually, after another 1/2 – 1 mile, you’ll see a slope on your right that looks like a welcoming enough ridge pointed toward Mummy’s Head. Take this slope and welcome to the familiar Mummy Mt. avalanche slope world between 9-11,000 feet on all sides of Mummy Mountain! This ridge continues upward, sometimes being a relentless avalanche slope, other times being a nice walking ridge. The views open up below and are increasingly spectacular. Bristlecone Pine trees begin to appear around 8,800ft and gradually take over. There is no exposure along the way. Lots of wildlife…deer, sounds of birds. A few very steep spots require scrambling on all fours, but only brief sections that are more annoying than dangerous.

As you return down the avalanche slope, use the rather elaborate home on the ridge to the South as your point of reference. Realize that there are 2 ridges. Do not stay on the ridge that arrived at the base of the cliffs, but navigate to the next ridge to the South. That ridge will take you back to your point of origin. Just head straight toward the elaborate mountain home. 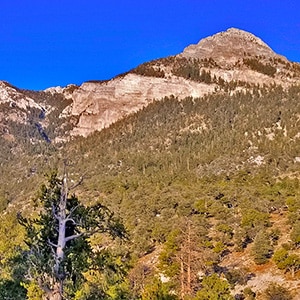