Note: I have not yet tested and verified these routes. However, the initial stretch from Red Rock Canyon Sandstone Quarry Trailheads has been tested and is documented in the images, videos and description on this page.

I’ve approached La Madre Mountain from the North, South, East and West. This page is devoted to the Eastern approach.

It’s important to note that as with the other routes up La Madre Mountain, this route is quite the marathon and the most limiting factor will be enduring the distance and altitude gain.

My initial exploration of this route began at the Sandstone Quarry parking area in Red Rock Canyon. I intended to head over to Kyle Canyon, pass the point where the La Madre Mountain South route headed up the Keystone Thrust cliffs to “The Notch”. Rather than heading up toward “The Notch”, during the initial exploration (below) I continued along the base of the Keystone Thrust Cliffs intending to round the Easter edge of the cliffs, then ascend La Madre Mountain.

After a few years exploring The La Madre Mountains Wilderness, a new, more direct Eastern approach strategy is emerging. This approach will likely begin on Kyle Canyon Road, or possibly in the Little Red Rock area. I’ll map that out once I’ve made The La Madre Mountain summit from the East. For now, find my initial exploration from the Sandstone Quarry parking area below.

So far, I’ve successfully summited La Madre Mountain from the North. West, South and East summit routes will come next.

I began to explore this approach at the end of the Spring lower desert season so most of this route is yet to be discovered. This Eastern approach route begins following the same path as the Southern approach route starting at the Sandstone Quarry parking area (Turtlehead Peak trailhead). From there head up Red Rock Wash and circle around the upper end of the Turtlehead Peak ridge system into Calico Basin, cross the upper Calico Basin, circle around the East end of the Keystone Trust and finally ascend the North side of La Madre Mountain.

Look for the larger wash on the far side of the Calico Hills that skirts the edge of the Damsel Peak ridge. Take a left up this wash and begin to ascend the Damsel Peak Ridge angling upward and to the left. As this point was the extent of my Spring 2019 exploration I can only offer the state of my own strategy at that time. My intent is to reach the top of that ridge, where Las Vegas Valley comes into view, circle around the East side of the Keystone Thrust, then ascend the North side of La Madre Mountain. It looks totally possible and I will explore this again and complete the Eastern approach route to the La Madre Mountain summit during Winter or Spring of 2019-2020. 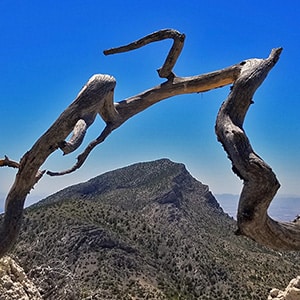