La Madre Mountain is 8,154ft in elevation. It is the highest central feature of the Keystone Thrust, the cliff system that spans the rear area of Red Rock Park in Nevada.

The La Madre Mountain Southern approach, from a distance, looks impossible as you’re facing a sheer cliff wall around 1000 ft high. However, as you approach the base of the cliff from Calico Basin it’s evident that there is a passage between the two peaks. This passage, rather steep, avalanche slope rocky and dicey in places, is accessed via a the main canyon wash at the top of Calico basin. This wash is formed by the runoff between the twin La Madre peaks.

The summit view is amazing featuring Las Vegas Valley with Lake Mead across and to the East, Gass Peak and the Sheep Range to the North, spectacular views of Mt. Charleston Wilderness to the East and the awesome total expanse of Red Rock Canyon National Conservation Area and Calico Basin to the Southwest.

I’ve approached La Madre Mountain from the North, South, East and West. This page is devoted to the Southern approach.

Getting to the Southern approach (base of the La Madre Mountain cliff) is not easy as there is no trail and only distant access points. My best suggestion is to start at the Sandstone Quarry parking lot in Red Rock Park (trailhead for Turtlehead Peak). Your goal will be to get from Red Rock Canyon to Calico Basin where you will arrive at the base of the La Madre Mountain Southern cliff passage approach.

So what’s the most efficient way to get from Red Rock Canyon to Calico Basin? Fortunately there’s a very cool wash that intersects the Red Rock wash, branching off to the right and circling the upper end of the Turtlehead Peak ridge system taking you right into the upper Calico Basin without having to ascend and descend the Turtlehead Peak ridge system. The key is to locate this wash (I’ll refer to it as the Red Rock Canyon/Calico Basin Crossover Wash). Avoid the earlier false wash routes to the right. To locate the correct wash leading to Calico Basin see the image in the slide show on this page.

After crossing over to upper Calico Basin you will be faced with a series of ridges. You want to locate the summit passage approach wash that leads up to the La Madre Mountain summit. You’ll need to descend a bit to navigate around the lower end of these ridges to avoid ascending and descending the ridges. About 3-4 ridges in you’ll reach a large wash leading directly up to the La Madre Mountain Southern cliff passage.

Take a left and head up the La Madre Mountain Cliff Summit Passage Approach Wash. Alternately, to avoid all the rocks, boulders and debris in the wash you could take the ridge above the wash, but the wash itself is pretty wide and easy to navigate.

You’ll continue to rise until you are in the La Madre Mountain Southern cliff passage between the 2 peaks. You’re now at about 6,000ft nearly equal to the elevation of Turtlehead Peak. Continue to navigate the wash upward, eventually at about 7,300ft reaching the La Madre Cliff. Veer to the left and hug the base of the cliff. You’ll begin to see the cliff passage opening up before you. As of the writing of this article I’ve made it to the 7,400ft point, about 500ft shy of the top of the passage, stopped mostly by exhaustion but also partially by the increasing steep rocky nature of the terrain. When you’re at this point you want to have enough energy to navigate some pretty rough terrain. I’ll finish this article when I reach the summit via this approach. I may explore the upper end of the passage after making the summit from another direction–most likely candidate is the Northern approach. We’ll see!

Exploring Closest Wash Approach to the Summit Pass Up to 6900ft.

Reaching the Summit Route to La Madre Mountain, Snow In the Desert 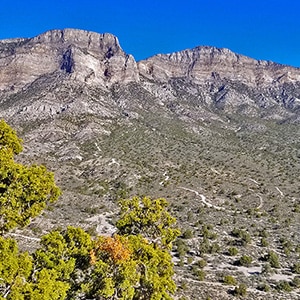