The views along the Northern Rim of Mummy Mountain are truly incredible, but seen by only a few climbers and hikers. It’s usually all one can take to to muster up the effort to summit the 11,500ft Mummy Mountain. Every route to the summit involves ascending a mile of steep loose rock avalanche slopes, climbing up rocks, boulders and ledges and traversing wilderness with no trails. By the time one reaches the summit there is a great urge to just rest, gaze at the incredible views in all directions, then descend through all the obstacles encountered in the ascent.

Vast Wilderness on the Summit of Mummy Mountain

At the same time, the summit of Mummy Mountain, unlike most high mountain summits, is a vast wilderness near a mile in length and over 1/8th mile wide. The wilderness is a combination of beautiful basalt rock dotted with ancient 2-3000-year-old Bristlecone pine trees and surrounded by rugged imposing cliffs. The summit of Mummy Mountain is easily a day-long adventure in itself.

On this day, for the first time, having arrived at Mummy Mountain’s summit, I summoned the energy to completely explore the entire rim North of the summit area. In the process I discovered no less than 4 additional potential routes to the summit that may not require any technical climbing and can mainly be hiked except for some relatively brief class 3 sections. The video and adventure story begins at the summit, but to get the full picture of the adventure you might also view the Mummy Mountain West page of this site which describes the journey to the summit.

The route I took on this day to the summit is the route beginning at the Trail Canyon Trailhead just beyond Charleston Village in Kyle Canyon, described and documented by video on the Mummy Mountain West page of this site.

Today we skirt the entire rim of Mummy Mountain North and West of the summit in a counter clockwise direction making a point to take in every outcrop and overlook at the very edge of the summit cliffs. Here are a few of the points of interest along the way:

You need to look back toward the Mummy Mountain Summit from a more Northern perspective to see this incredible ledge with its spectacular view. What a great place to rest on a generously wide ledge immediately beneath the summit, shaded by the Mummy Mountain cliff and beautiful ancient Bristlecone Pines. Getting to this ledge is an easy scramble around the edge of the cliff just to the left (North) of the summit. Views from this ledge include the Sheep Range, Gass Peak, La Madre Mountain, parts of Centennial Hills and many points of interest up the I-95 corridor.

Actually, this ledge is near the end of the summit ascent route adventure documented on the Mummy Mountain Southeast page of this site. Getting there from below can be pretty frightening as depicted on that page and in its video.

The next point of interest along Mummy Mountain’s rim is the top of the avalanche slope/cliff chute whose route is documented on the Mummy Mountain NE page of this site. To this date I have ascended this steep chute twice, but not mustered the courage to descend. On the way up it’s not as bad because you’re not looking down! Actually, with care, one can both ascend and descend without exposing oneself to a fall, but it definitely doesn’t look that way from the top looking down! This will be a part of the route on the 6-peak circuit adventure which involved the journey from Mummy Mountain (Peak #5) to Fletcher Peak (Peak #6) by way of Raintree. See my strategy for this adventure on the 6-Peak Circuit Strategy page of this site and see my latest attempt which included 4 of the 6 peaks on the 6-Peak Circuit page.

The next point of interest along the rim is potentially the shortest cliff ascent to Mummy Mountain’s summit. There’s a crack along the Eastern cliff that is only around 30ft high. It can be assessed from near the end of the ridge documented in the Mummy Mountain North page of this site. The lower 10-15 feet of this crack looks a bit vertically challenging, so I’ll explore this potential ascent from below rather than from above just in case that steeper section ends up lacking the holds needed for this trail runner to safely ascend. Better to be stopped from below than to go off an unsupported ledge from above – even if the fall would only be around 10 feet. Even a light to moderate injury in this isolated wilderness with no cell phone reception could quickly turn into a big problem.

At the Northern edge of the rim of Mummy Mountain’s main summit area there are 3 fairly gradual avalanche slopes that converge into a wash before continuing down to Lee Canyon. They appear to end near the turn-around just below the ski area on the Lee Canyon Road. From above these routes look fairly easy, but there’s no telling what obstacles the lower portion may contain, or if one might descend into someone’s private property! For this reason, I’ll most likely ascend from Lee Canyon where I can encounter any potentially route-stopping obstacles below, knowing that if I can manage to get to the point where the avalanche slopes converge into one wash the rest of the route to the summit should be fairly easy.

At the very Northern tip of the rim of Mummy Mountain’s main summit area there is the beginning of the ridge pointing toward Mummy Mountain’s head. I scoped that out enough to see that for the first 1/8th mile the going would be fairly easy. However, there is a bluff blocking the view of the ridge further on. One can get to that bluff with little problem. But I was unable to see what the ridge looked like beyond the bluff. That will be a future adventure.

As you can see, there are a number of largely unknown routes to Mummy Mountain’s summit from the Northeast, North and Northwest. Over time I’ll explore and document all of these. The routes are pretty wild and promise to reveal rare and beautiful wilderness views seen by few people. 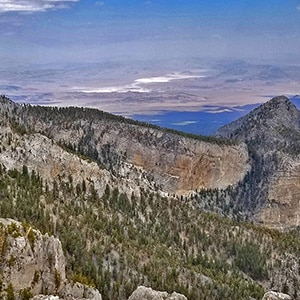 Article Name
Mummy Mountain Northern Rim Overlook, Nevada
Description
The views along the Northern Rim of Mummy Mountain are truly incredible, but seen by only a few climbers and hikers. It’s usually all one can take to to muster up the effort to summit the 11,500ft Mummy Mountain.
Author
David Smith
Publisher Name
LasVegasAreaTrails.colm
Publisher Logo