In putting the pieces of this route together I first completed the Northern Half of the Kyle Canyon Grand Crossing which involved ascending to the summit of the Keystone Thrust cliff system from the intersection of Kyle Canyon and Harris Springs Roads.

This page is devoted to working out the Southern Half of the Kyle Canyon Grand Crossing which involves creating a route from the summit of the Keystone Thrust cliff system down into Red Rock Canyon.

This adventure is an immersion in the wilderness featuring passing through the Joshua Tree band around 4-5000 feet on either side of the Keystone Thrust and rising up through the Juniper and Pine bands on the Keystone Thrust, thus a number of beautiful climate and flora zones. There is the combination of distance and climbing challenges between class 1 and class 3 levels of climbing over a distance approaching a marathon with the added factor of the 4,000ft ascent and descent.

Finally, there are the spectacular views at nearly every moment along the way including Gass Peak, the Sheep Range, Mt. Charleston Wilderness, La Madre Mountains, Rainbow Mountains, Red Rock Canyon and too many points beyond to mention here. It’s basically a large view of Southern Nevada with parts of Arizona and California!

However, to experience all this involves working out this most challenging part of the Kyle Canyon Grand Crossing: Navigating the Keystone Thrust cliff system in the Southern half of the route.

Since the low points on either side of the Keystone Thrust are around 4500ft and the high point is around 8,000ft at the summit of the Keystone Thrust, the best time for this adventure would be early to late Fall (before the snows which could make the cliffs treacherous) or mid to late Spring (before the Summer heat which could rise to 110 degrees or more at the low points). So, there are two small windows of opportunity each year.

The access point is the White Rock Mountain turnoff from the main Red Rock Park scenic loop road. This is the next turnoff after the Scenic Loop High Point–on the right. It’s well marked. There is a lower and an upper parking area separated by about a half mile of unpaved road which is best with a 4WD vehicle. The second access is the following turnoff – Willow Springs – and you can access the loop at one of 2 parking areas on that turnoff.

During this exploration we began to try out various approaches from the base of the cliffs below the El Bastardo / Burnt Peak saddle to the summit of that saddle.

Bypassing the Boulders in the Lower Wash

To avoid the boulders and channels in the lower wash, cross the wash and precede up the White Rock Mountain trail. Continue on that trail passing its intersection with the Keystone Thrust trail. The White Rock Mountain trail will soon descend back into the wash above the boulder section. When it descends again into the wash, take a right and head up the wash.

The Mid-to-Upper Wash is Wide Open!

There are only a couple barriers in the wash before you reach the base of the Keystone Thrust cliffs below the saddle. Easily and briefly skirt these dry waterfalls to the right (East) then descend again into the wash. The wash will take you to the base of the cliffs with no further barriers!

As you reach the cliff base the wash will split with a small branch to the left and the main branch to the right. I explored both branches until faced with a very large 50ft+ dry waterfall at around 6,600ft elevation in each branch. Both dry falls are class 4 and look passable to experienced rock climbers. The washes continue upward beyond the dry falls, but there may be other obstacles above.

Note that the summit of the saddle is about 7,500ft, so the dry falls are only about 900ft below. And, the most challenging area where there is a 50ft+ cliff band about half way up the Keystone Thrust cliffs is between 6,600 and 6,900ft. Potentially, if you can navigate that 300ft trouble zone, you will have a clean stretch the rest of the way to the summit of the saddle! But that trouble zone is a monster!

Other Approaches to the Saddle Summit

There appear to be at least one or two other potential approaches to the summit of the saddle. One is to the East (right) of the main wash. However, it looks steep, with loose rock and some questionable stretches. The other is to the West (left) of the main wash. It also looks rather steep, but with a firmer rock base. I’ll explore these during future adventures.

Two additional, more promising Grand Crossing approaches I’m scoping out are the Western approach above La Madre Springs and the Southern approach through the notch between El Padre and La Madre mountains. There may also be an Eastern approach which circles around the East (right) side of La Madre Mountain. More on these additional approaches will appear at the above links as I continue to explore.

A Kamikaze approach may ascend from the main wash up East to El Padre summit, but this approach is steep, with loose rock and frightening exposure! This trail runner will probably not attempt that approach!

The position of Burnt Peak, El Bastardo and the saddle between are by now easily recognized from Kyle Canyon to the North. During this exploration we created a frame of reference to identify these points of reference from Red Rock Canyon to the South. We also scoped out the area at the Southern base of El Bastardo, Burnt Peak and the saddle from a high point on the cliffs below in Red Rock Canyon and scanned the cliffs for potential Southern approaches. We also worked out the most streamlined approach from the White Rock Mountain trailhead to the base of the cliffs below the saddle.

Establishing Your Frame of Reference

When you arrive at either the lower or upper White Rock Mountain parking areas and look toward the Keystone Thrust cliffs to the North, you will see two high points in the cliffs: The high point to the furthest right is El Padre Mountain. The high point to the left of that is El Bastardo Mountain. Between the two there is a saddle. Your goal is to get to that saddle where I stood at the end point of the Kyle Canyon Grand Crossing Northern Half. From there I looked down on the Eastern edge of White Rock Mountain where you are now standing. It’s important to have this larger perspective of your goal from the beginning. Keep the saddle in sight as your target. You’ll see it during the entire adventure.

You’ll immediately descend into a wash. This wash could take you to the exact point in the Keystone Thrust you want to reach below the El Padre / El Bastardo saddle. However, on the ascent, the deep gravel in the wash could slow you down and soak up some of the energy you will need later during the steep ascent of the Keystone Thrust.

There is another alternative to the wash. Cross the wash and take the Keystone Thrust Trail when it splits off to the right from the White Rock Mountain Loop Trail in about 1/8th mile from the trailhead.

You could continue on the Keystone Thrust Trail for about a mile until an old road splits off upward and to the left just before the trail begins to descend. Take the old road upward and watch for an opportunity to descend to the wash to your left. This is the same wash you crossed at the parking lot trailhead in the beginning. You just saved having to trudge through the deep gravel and obstacles in the lower wash.

Descending Into the Upper Wash

Now, continue upward in the wash. You will eventually arrive at the base of the Keystone Thrust cliffs below the saddle between El Padre and El Bastardo Mountains, which is your goal.

The High Ridge Further Up Gives the Big Picture, But It’s Not a Route to the Summit

On this day, I stayed on the high ridge above the wash and to the right. I kept ascending that high ridge to about 6,500ft and from there filmed some potential ascent routes up the Keystone Thrust. The most promising appeared to be along a route closest to El Bastardo Mountain. It seemed possible to weave around rocky areas and ascend at the class 3 climbing level all the way to the saddle. I cannot vouch for the condition of this route, but will scope it out in a future adventure.

By the way, the ridge I ascended took me to about 300 feet higher than the elevation of Turtlehead Peak and into a beautiful juniper and pine zone. However, it appeared that the summit of the ridge would end at a vertical cliff section of the Keystone Thrust. The main value of ascending that ridge was to scope out potential ascent routes on the Keystone Thrust.

Turn around often during this adventure to see Red Rock Canyon, the Rainbow Mountains and even the Las Vegas Valley opening up below! If you just went to the summit of the high ridge, that in itself would be an incredible adventure!

Returning By Way of the Wash

Finally, in this initial exploration, I descended back to the White Rock Mountain Trailhead by way of the wash. The wash was pretty wide open all the way down with only 2 small 10-15ft pour-over dry falls which were both easily circumvented: The first to the right, the second to the left. For both I quickly re-descended into the wash beyond the barrier. Descending the wash was pretty effortless as the gravel was not a problem going downward.

Revert to the Trail When it Crosses the Lower Wash

One final quick tip: When you descend to the point in the wash where the original White Rock Mountain Trail crosses the wash (there is a distinctive rock border) turn left to head down the trail to the trailhead. If you turned right you’d go all the way around White Rock Mountain. Turning left onto the trail will help you avoid the rocks and boulders in the lower wash. However, if you don’t mind navigating rocks and boulders, stay in the wash. Both the wash and the trail will take you back to the trailhead where you began. 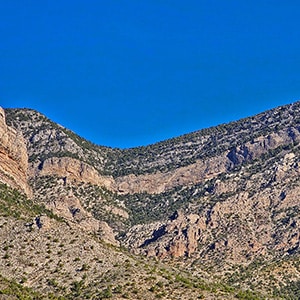