Pine Creek Canyon is one of the most popular destinations in Red Rock Canyon for good reasons.

Get to Pine Creek Canyon early in the day because it fills up fast! All the way around the 13-mile scenic loop and near the end, when I arrived at 7am on a November Saturday morning the Pine Creek Canyon trailhead parking area was already half full!

Also, note that Pine Creek Canyon is divided by its impressive central feature, Mescalito Pyramid, into a Northern (Right) branch and a Southern (Left) branch. More on that later.

In the Rainbow Mountain Wilderness

By the way, as you head up Pine Creek Canyon and into those beautiful Jurassic Era red and calico rock ancient frozen sand dune peaks, you’re leaving Red Rock Canyon and entering into The Rainbow Mountain Wilderness which stretches from its Northern point at Willow Spring to its Southern point at Potosi Mountain.

Definitely avoid the high mid-day Summer temperatures that can exceed 100 degrees in Pine Creek Canyon. If you’re intending an adventure high in the canyon Winter may bring snow, ice and horribly slick treacherous conditions on all the rocks both small and huge. And, if the rocks are wet, forget it! They become similar to a sloped ice skating rink with many sudden drop-offs. Wait at least a day following rain until the rocks have thoroughly dried.

From I-215 take the Charleston Blvd exit (at Red Rock Casino) and head upward through Summerlin toward Red Rock Canyon National Conservation Area. It’s the first right turn after Calico Basin. Take the Red Rock Canyon scenic drive to the West side of Red Rock Canyon. Pine Creek Canyon will be the next major trailhead parking area past Icebox Canyon.

From the rear of the parking area, take the main trail leading at first downward into Pine Creek Canyon. Just set your sights on Mescalito Pyramid/Peak, the main feature in the center of the canyon ahead. Once you descend into the canyon you’ll begin to ascend until you reach the base of Mescalito.

Along the way, notice a number of side trails crisscrossing the main trail. The Knoll Trail leads South, downward along the base of the Rainbow Mountains. The Dale Trail leads North, upward along the base of the Rainbow Mountains to Icebox Canyon and beyond. There’s also a short loop trail branching off to your left (South): The Fire Ecology Trail, which leads down into the beautiful Pine Creek area. The Fire Ecology Trail is well worth the brief detour! There are other trails branching off the main trail leading to Juniper Peak and Rainbow Mountain access points. Some are marked, others unmarked. There are definitely many adventure opportunities beginning at the Pine Creek Canyon trailhead. Eventually I’ll document them all!

If you head into Pine Creek Canyon in the early hours of the morning you’ll encounter hikers loaded with rock climbing gear. In fact, these are the main hikers on the trail looking to get an early start. Where are they going? Look at the vertical cliffs ahead. There is the base of Bridge Mountain on the right (North) side of Pine Creek Canyon. There is Mescalito Pyramid in the center of the canyon and the Juniper Peak/Rainbow Mountain area on the left (South) side. All of these are premier rock climbing destinations. In fact, a great adventure would be to find a good vantage point  across from and above the base of Mescalito Pyramid and watch the rock climbers. Watch the video and view the slide show on this page. Of course, if you’re a highly advanced rock climber you’ll have quite a different experience.

As you ascend into the canyon beyond the Fire Ecology Loop you’ll see a sign for the .8-mile Pine Creek Loop. In fact, the main trail becomes the Pine Creek Loop which heads up toward the Northeast base of Mescalito Pyramid, then loops around to the left (South) along the base of Mescalito before descending back down the South side of the canyon and reconnecting with the main trail back to the parking area. On this loop you’ll experience a close-up view of Mescalito Pyramid, cross Pine Creek and that attractive ribbon of pine trees at the base of the canyon and experience more photo opportunities than you can count!

At the top of the Pine Creek Loop Trail, just before it loops around to the left, notice a branching trail that continues upward into the Northern branch of Pine Creek Canyon. This is the branch with the cliffs of Bridge Mountain to your right and Mescalito Pyramid to your left. On this mid-November day it was clear that this branch of Pine Creek Canyon was the most popular rock climbing destination. In fact, I saw no climbers in the South branch of the canyon.

Back to that trail branching off Pine Creek Loop Trail: At every point it seems the trail is going to end in the next 50 feet! You can’t see beyond the next potential drop-off or wall of thick brush. But, keep going. The trail winds around obstacles ahead and continues up along the right (North) side of this branch of the canyon. There will be a number of points that you are tempted to take a left turn down into the base of the canyon. Keep to your right and stay high along the base of the Bridge Mountain cliffs. If you descend into the lower creek area at the base of Mescalito Pyramid you’ll get bogged down in the brush.

There are a number of rock climbing approaches heading right and upward to the base of the Bridge Mountain cliffs. If you’re a rock climber, these are great destinations. I’m tempted to say “jumping off points“, but this phrase is probably not too popular in the rock climbing world!

Eventually, you’ll reach a point where steep drop-offs and thick brush end the rock climber’s approach trail. Shortly before this point there is a cairn-marked descent trail to the base of Mescalito Pyramid. This appears to be the main approach for rock climbers seeking the Mescalito cliffs. On this day I actually enjoyed sitting at the summit of the rock climber’s trail and watching crazy people taking on the vertical Mescalito cliff face…going places that are NOT on my bucket list! But it was fun to watch. See the video and slide show on this page. By the way, if you’re a rock climber looking for the Mescalito approach, if you head down toward the pyramid too early you’re likely to get bogged down in thick brush and loose some of the time you want to spend scaling the cliffs.

My intent on this day was to scope out a potential route to the summit of The Rainbow Mountains Upper Crest Ridgeline. This could potentially save time traversing Rocky Gap Road from Willow Peak Canyon. The South branch of Pine Creek Canyon doesn’t look too hopeful for us class 3 rock scramblers. There’s a lot of brush, vertical drop-offs and ultimately a cliff wall further up that branch of the canyon. There may be an approach, but I did not see it from the summit of the rock climber’s approach trail. Perhaps one could descend to Pine Creek and wade in the water to avoid the wall of brush. A future adventure! On this day I turned and headed back down to the Pine Creek Loop Trail.

After heading back down to the Pine Creek Loop Trail, I took a right there and headed toward the South branch of Pine Creek Canyon.

Locating an Approach to the South Branch of Pine Creek Canyon

Continue on the Pine Creek Loop Trail along the Eastern base of Mescalito Pyramid. Shortly before the loop trail takes a definite left to descend back down Pine Creek Canyon, there is a hidden spin-off trail heading up the South branch of the canyon.

The South branch is much wilder and less traveled. You need to piece out a route up that branch. There are basically two choices: Wade in the creek or take the high route to your left along the base of Juniper Peak. I chose the high route. There is a faint trail that will get you pretty far. However, it becomes dicey as you approach a slot that ascends to your left (South) up between Juniper Peak and Rainbow Mountain. It looks as if someone has traveled further toward the slot…it seems there is a faint opening through the brush. However, there is increasing brush and hidden drop-offs here. This is where I stopped.

Alternately, if you took the low route and waded in Pine Creek – which I had previously done you’ll progress further, and additional routes could open up…or not!

About that goal of locating a route to the Rainbow Mountains Upper Crest Ridgeline, it looks more possible via this South Branch of Pine Creek Canyon. Looking ahead up the canyon (see the video and slide show) the final approach to the Ridgeline summit could be class 3 if one could successfully reach it through the brush in the canyon and then weave around and between the vertical rock formations on the final ascent beyond. The best bet seems to be: Wade in Pine Creek and hope for a passage way to the final approach.

And, back to that slot between Juniper Peak and Rainbow Mountain: One might wade through the creek and take a sharp left up that slot and see how that goes. However, from a previous adventure, that slot has a healthy thickness of brush. 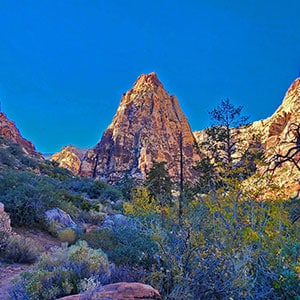