As you’re traversing the ridges and saddle between Griffith Peak and Harris Mountain and you look down a beautiful canyon to the South (opposite direction from Charleston Village), you’re viewing Lovell Canyon in the La Madre Mountains Wilderness. When you’re in and around Lovell Canyon there are unique and awesome views of Griffith Peak and Harris Mountain at the summit of the canyon, Wilson Ridge to the East (Western border to the Rainbow Mountain Wilderness on the Western side of Red Rock Canyon National Conservation Area) and the place where the Wilson Ridge intersects the Keystone Thrust ridge system to the Northeast.

The average altitude on this adventure is between 5,000 – 7,000ft and so I recommend this as a good adventure for Fall or Spring. It looks as though one could use this as a starting point for a trip all the way up to the summit of Griffith Peak, and with the Southern facing angle of the ridges the entire approach would likely be the first approach to Griffith Peak free of snow in the Spring.

Take Hwy 160 from Las Vegas toward Pahrump. The highway ascends over a “hump” (the Potosi Mountain area). There’s a saying around here, “Over the hump to Pahrump”. Well, you’ve just traveled over that hump. Around 4-5 miles from the point where the highway begins to descend toward Pahrump there is a well-marked sign on the right for Lovell Canyon Road.

Lovell Canyon Road is a beautiful stretch passing through a joshua tree forest that soon becomes populated predominately with junipers and pines. There are ridges and meadows and many camping pull-outs along the way. This stretch reminds me a lot of the high desert area around Bend Oregon. Very open and majestic. All the while you’re looking up at the Spring mountains with Griffith Peak standing prominent. The road has very little traffic and would make a great bike, walking or running route. In fact, what an awesome backdrop for a marathon (pretty easy to add 2 miles to the 24-mile out and back stretch)!

The trail quickly ascends and then follows a ridge on the Western side of Lovell Canyon, with many grand views up the canyon to Griffith Peak and Harris Mountain. The trail itself is very well maintained and makes an excellent trail running route.

A few miles up the trail there is a well-marked split-off to the left for Griffith Shadow Loop. On this day I took the loop, which the trail sign said was 1.3 miles. Now, unless I’ve totally lost my sense of distance, I’ve got to say that I found myself wondering whether the sign maker placed a decimal point in the wrong place meaning that the Griffith Shadow Loop might actually be 13 miles! Or, perhaps I missed a turn.

At any rate, I began to ascend…and continued to ascend eventually over 1,000ft up a ridge. It looked as if the trail was heading for Griffith Peak. The ridge is an old burn area with few mature trees, but the looks of a mountain meadow in terms of plant life — grasses, small shrubs, wide open, lots of light.

The views on the ridge are tremendous in all directions. There are a few high points with grand 360-degree views, of which Lovell Summit must be one. Circling around the trail intersects with a ridge that looks as though it could actually be an approach ridge to Griffith Peak summit. I’ll have to return to try that out. I’m estimating the overall time up the Lovell Canyon trail, the Griffith Shadow Loop and then on to Griffith Peak summit could be in the area of 6 or 7 hours up and 3 hours back…just a quick intuitive estimate.

The Griffith Shadow Loop at first circles away from Lovell Canyon as it ascends, then finally around again to face Lovell Canyon. There is a healthy descent and re-ascent as you circle around back to the Lovell Canyon side. Finally you arrive at a high point overlooking Lovell Canyon. It looks as though at this point the trail is no longer well maintained but a bit choked by grass. The trail quickly descends to the bottom of Lovell Canyon and crosses the canyon. There’s a cairn on both sides of Lovell canyon marking the trail crossing.

Detour Down the Lovell Canyon Wash

At this point I decided this trail must actually be heading for Harris Mountain, so I took a right and headed down Lovell Canyon with the assumption that the canyon would again intersect with the Lovell Canyon trail. The rock and gravel on the canyon floor is easy enough to run on lightly if your ankles are well conditioned for off-road running. I run 6 miles each day off road. 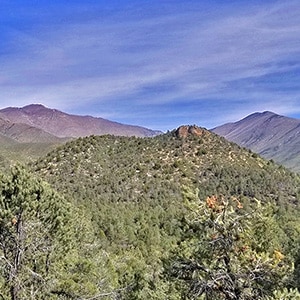