This is my preferred Eastern Ascent route to the summit of Mummy Mountain. Unlike the Southeastern Mummy Mountain Ascent where you ascend a horrifying rock wall exposed to a 100ft drop, the Northeastern ascent route involves absolutely no dangerous exposure. However, the avalanche slopes are very steep and at times I found myself on hands and knees ascending a few slippery stretches. Had I totally lost my hold on that slope I would have flattened myself out and slid a couple feet to a gentle stop.

The wash and canyon that ascends to the summit is very beautiful and contains an ancient bristlecone pine forest with ancient trees between 2 and 3 thousand years old. The views down the wash include the Mt. Charleston Observatory and directly behind in the distance, Centennial Hills Las Vegas and Gass Peak. To the left of Gass Peak you can see the Sheep Range. I imagine on a very clear day you could see Lake Mead.

This entire trip took me about 7 hours plus about 1.5 hours for rest and video filming. About 4 of the hours involved traversing wilderness with no trails. In all, it’s a very beautiful and memorable adventure. Before attempting this adventure you should have good comfort and experience navigating wilderness areas and ascending steep scree slopes.

Directions to the Trailhead for Mummy Mountain Northeast, Nevada

See the slide shows and the videos on this page for more detail.

This adventure video records in more detail the wilderness route from Mummy Springs Trail to the avalanche slopes on the Northeastern side of Mummy Mountain.

My goal was to ascend the Northeastern side of Mummy Mountain as before and then descend by the same route returning through the wilderness back to Mummy Springs Trail. This would enable me to add this stretch to a 6-peak circuit adventure. The strategy: At the moment I am most exhausted after having summited the 5th peak, Mummy Mountain, I would rest as I descended the Northeastern cliff, traverse the wilderness and then summit the 6th peak, Fletcher Peak.

Documenting the Wilderness Route Along the East Side of Mummy Mountain

The adventure began well as I carefully documented the wilderness route from Mummy Springs Trail to the avalanche slopes at the Northeastern end of Mummy Mountain. The video shows those detailed directions traversing 3 washes and their adjoining ridges to ascend the avalanche slope to the right of the Northeastern wash in what I call “Delta Canyon”…also called “The Fingers” by Las Vegas long-timers.

Descent on the West Side of Mummy Mountain

Raintree to the Wilderness on the East Side of Mummy Mountain

Traversing the Wilderness Along the East side of Mummy Mountain

Proceed up the ridge angling to the right and after about 1000ft turning right to descend crossing the first wash. You are now basically traveling parallel to the East side of Mummy Mountain. Ascend from the wash and cross a second ridge. Descend the second ridge, cross a wash and ascend and cross a third ridge. Descend the third ridge into what I refer to as “Delta Canyon” due to the fact that there are 3 washes that fan out and upward to the base of the Mummy Mountain Eastern cliffs. You should be entering Delta Canyon just above where the 3 washes converge. This stretch takes about 1.5 hours. By the way, be looking back often and developing a plan to navigate this wilderness stretch back to Raintree if you have to turn around before achieving the Mummy Mountain summit!

Cross the canyon to the base of the next ridge and ascend the Northern wash. When you reach some ledges blocking the wash, ascend the ridge to the right to skirt the ledges. Continue up the lower portion of the ridge paralleling the wash (about 50ft or so above the wash) until you reach the base of the Mummy Mountain cliff. This stretch is a steep avalanche slope and takes about 1 hour.

At the base of the Mummy Mountain cliff, enter the narrow canyon which is the origin of the wash. You will ascend this canyon, traveling up very steep avalanche scree all the way to the summit. About half way to the summit the wash will be blocked by a 10ft rock wall. Skirt the rock wall to the right and continue upward. You’re now pretty much out of the wash heading straight up to the North Eastern summit of Mummy Mountain. At the summit, take a left and proceed about ¼ mile to the true Mummy Mountain summit. This stretch takes about 1 hour.

Descend from the summit down the West side of Mummy Mountain through the V-shaped canyon (see the Mummy Mountain West page for directions). At the base of the V-shaped canyon take a hard left proceeding about 1/8th mile before taking a right downhill about 500ft then angling left to take the Kyle Canyon North Ridge to the top of an avalanche slope I call the “Horrifying Half”. Take a hard left down the avalanche slope for a half mile where it meets the North Loop Trail. This stretch takes about 45 minutes.

Descent to the Trail Canyon Trailhead

Why the Wilderness Route Exploration?

The unique element of this adventure was the first return trip down the Eastern avalanche slopes of Mummy Mountain and back through the wilderness back to Mummy Springs Trail. Why the traverse through the wilderness? Because my goal is to make this section of wilderness part of a 6-peak circuit route including, in order, Harris Mountain, Griffith Peak, Charleston Peak, Lee Peak, Mummy Mountain and finally Fletcher Peak. The wilderness route down the Eastern side of Mummy Mountain to Raintree and the on to Fletcher Peak has less elevation gain and loss than any other route from Mummy Mountain to Fletcher Peak. At this point in the 6-peak circuit my energy will be most spent and so reducing as much elevation gain as possible may be a factor that makes it possible to attain that sixth and final peak.

The Challenge of Returning to Mummy Springs Trail Through the Wilderness

It’s relatively easy to navigate through the wilderness to a mountaintop as you can see your destination clearly during much of the route. On the other hand, navigating back through the wilderness to the very spot where you left the last trail can be much more difficult. In this case your end point (the very small trail) is not visible at any point during the return trip and only becomes visible when you are within 50ft or less of the trail. In addition, it is very possible to miss that tiny tail. Had I, in error, passed below Mummy Springs trail even by as little as 50ft I would have ended up descending a strange canyon and potentially taking additional hours to find my way back to a trail. Had I, in error, passed above Mummy Springs trail I would have eventually hit that trail at a higher elevation and lost much less time. However, I might have ended up blocked by a strange cliff and in need or reorientation.

Why No Compass or GPS?

Of course, I could have utilized a compass, GPS or a topographical map to help avoid missing the end point. But I wanted to navigate by landmarks and by the feel of the wilderness instead of being tied to instruments. The intended result was a greater overall understanding of the wilderness area by direct sight and feel. And this is exactly what happened.

The Eastern descent route begins on the avalanche slopes in the canyon I call “Delta Canyon” due to the three washes that begin at the base of the Mummy Mountain cliffs and then descend to converge lower in the canyon. They form an upsidedown river delta, thus “Delta Canyon”. The locals refer to this canyon area as “The Fingers”. Between the Mummy Springs Trail and Delta Canyon there are three ridges divided by three canyon washes. The navigation strategy is to avoid descent and re-ascent as much as possible in order to make the trip a gradual steady elevation change in both directions.

I was able to accomplish this on the way from Mummy Springs Trail to Delta Canyon. However, on the return trip I did get off course a bit on the second ridge hitting the middle wash about 1/4th mile high. This was not a problem, I just descended the ridge to the wash to resume the correct wilderness route. My strategy is that if you’re going to go off course, always shoot to go too high. You can always descend to relocate your route. If you shoot too low you might end up getting way off course in the lower canyons. This strategy worked.

I finally reconnected with the tiny Mummy Springs Trail only about 50ft from the very point I had left the trail! 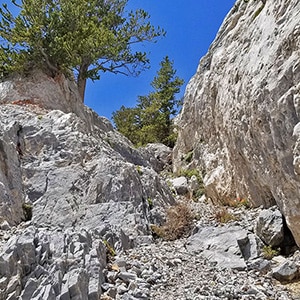