As I explored Valley of Fire State Park following my Valley of Fire 6-Day Strategy, I was looking for the highest overlook where I could view the entire park from one spot. My eyes kept turning toward the Southern mountain boundary range to the park. Finally, I could stand it no longer and had to ascend those mountains. A good entrance point was the Western trailhead for the Old Arrowhead Trail. I parked there and found my way up to the top of the ridge where I filmed the Valley of Fire State Park Panorama Video on this page.

Park at the Old Arrowhead Trail Western trailhead, just beyond the Western entrance of Valley of Fire State Park (and before the Beehives).

From the parking area head up to the nearest opening in the Muddy Mountain ridge system. It will be slightly to your left. As you ascend, you will see, and use the trails established by bighorn sheep. Continue up to the top of the opening, then ascend the small summit to your left. This is the point where I filmed the Valley of Fire State Park panorama video. Be careful when ascending the ridge as there is a lot of loose rock…tread lightly!

If you have time and want to explore further, you might refer to my Muddy Mountain / Lake Mead Overlook adventure page where I did just that. 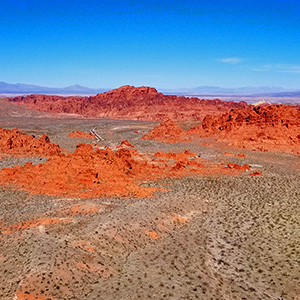