The Calico Hills form a boarder between lower Red Rock Canyon and lower Calico Basin in Nevada. These ancient sand dunes have been frozen into an artistic display of fantastic shapes, colors and designs. From a distance the Calico Hills are dwarfed by the larger surrounding formations. However looks are very deceiving as the closer you get these formations become huge with 30-40ft sheer drop-offs. They’re actually a great playground for those who like to weave around amidst their maze of formations seeking the summit with its incredible view of both Red Rock Canyon and Calico Basin.

In addition, there’s Red Springs Desert Oasis at the base of the Calico Hills with its peaceful boardwalk–a great place for a nice walk with friends and family who may prefer this lighter but truly rewarding nature experience over more rugged adventures.

Route Around the Grand Loop

This route is a 5 mile loop and begins and ends at the Red Springs Desert Oasis or at the first viewpoint on the Red Rock Park scenic drive on the other side of the Calico Hills. You can take the loop in either direction. I began at Red Springs Desert Oasis and headed upward along the base of the Calico Hills. There’s a pass at the upper end of the hills that leads your through to the Red Rock Park side. Descending down the other side of the pass there’s a beautiful pool…water in the desert! The pass itself is the only rough part of the loop and requires some navigation through sandstone boulders and brush.

Once on the other side of the pass, at points a pretty good trail appears. However, it is not always clear, so circle around the Calico Hills formation keeping the overall formation as your main point of reference. Pass the first two viewpoints on the Red Rock Park scenic drive before circling around the lower end of the Calico Hills back to your point of origin at the Red Springs Desert Oasis. The rock formations and colors along the way are pretty spectacular and the best views are at sunrise and sunset as the light brings out the full beauty of the color in the hills adding to the overall display. 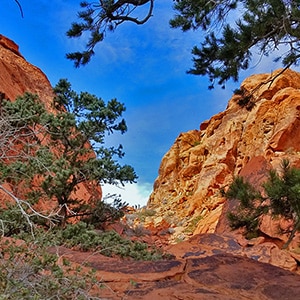