Some petroglyphs in Valley of Fire State Park, Nevada may be found at the top of the Atlatl Rock staircase (found next to Arch Rock,shortly beyond the West entrance to the park), but most are found on the Mouses Tank Trail (found on White Domes Road shortly after the visitor center). The petroglyphs on Mouses Tank Trail comprise the majority of the slides on this page.

That being said, here is my paltry summary that pales in comparison to the dissertation of Eric Pacl, but gives a general overview.

The oldest petroglyphs in the Atlatl Rock area appear to date from around 2,000 B.C. Around 2,000 B.C. there was a transition from hunter-gathering to cultivation with the Anasazi cultures. There was another transition to the Southern Paiute cultures in the 12th and 18th centuries.

I hesitate to say anything more lest I quickly get in over my head! Read the thesis.

However, I will say that the petroglyph images in the slide show may be the sharpest available anywhere due the the fact that I ran them through a 10-step photoshop process sharpening their image and contrast against their background.

Location of the Valley of Fire Petroglyphs

The petroglyphs come from Atlatl Rock (the name derives from an ancient spear-throwing device), the most ancient and perhaps holy site, and Mouse’s Tank Canyon and Trail named for the Southern Piaute “Little Mouse” who hid there after being falsely accused of shooting two prospectors in the 1890s. The natural water cistern, also pictured in the slide show may have been his means of holding out for a period of time in that dry desert area. 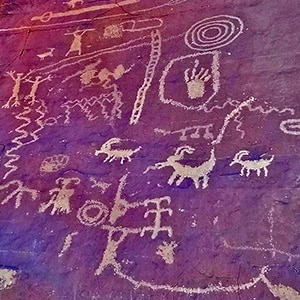 David Smith has devoted the better part of one day each week over the past 20 years to experiencing a mountain trail running adventure. He began in the Pacific Northwest with the Columbia Gorge and Cascade Mountains; then moved to Southern California and experienced the Angeles Crest mountains; then the Northeast where he experienced the Hudson River Valley and Minnewaska; finally in 2016 to Las Vegas where he is experiening and documenting Red Rock Park, the Spring Mountains (Mt. Charleston area), Death Valley and beyond!

Return often to experience one new adventure each week! From the home page scroll to “Most Recent Adventure“.