There is a little-known canyon between Robbers Roost and Fletcher Peak in the Mt. Charleston Wilderness of the Spring Mountains, Nevada. The canyon is bordered by majestic cliffs and is a climate zone unto itself populated by a forest at its base that in places grows up the solid cliff walls. This appears to be a major world-class rock climbing destination with numerous points of approach to the surrounding cliffs. The view down the canyon looks straight at the Charleston Observatory, while upward and to the left Fletcher Peak begins to appear about half way up. There is a fairly well established trail to the point where the cliff walls give way to avalanche slopes to the right and the left.

From this point on to where the right ridge top meets up with the highest point of the North Loop Trail before that trail descends to Raintree, there are few if any signs of human passage. The views continue to expand including the Sheep Range, Gass Peak, Centennial Hills, La Madre Mountain and Frenchman Mountain. The day was hazy due to the many Western U.S. forest fires, but on a clear day views down the canyon would extend to the Lake Mead area and beyond to points in Arizona. Up the canyon as one approaches the summit you will find yourself in Bristlecone Pine forests as Mummy’s Toe begins to appear not very far ahead.

Take Kyle Canyon Road off of Hwy 95 toward Charleston Village. Shortly before Charleston Village Deer Creek Road branches off to the right heading toward Lee Canyon. Take Deer Creek Road to a small parking turnout (accommodating about 3 cars) on the left just before the larger Robbers Roost turnout. There is a trailhead at this turnout that leads toward Robbers Roost.

Taking the trailhead toward Robbers Roost, after about 200 feet take the branch to the left leading up the canyon. There is a pretty well established trail for the first mile of so up the canyon. Stay to the base of the cliffs on your right. There are cairns along the way, apparently marking entrance points to the cliffs for rock climbers. In a few places you will need to scramble a bit to continue along the trail, but there is far more nice trail surface than scrambling.

Though the slopes on the right are steep in places, there is never any significant exposure and a fall would bring one to a grinding halt in a few feet of gravel and rock. Definitely not desirable, but should not be life-threatening. No guarantees on that since one can trip over a child’s toy in the living room and end one’s life! The avalanche slopes are only about a hundred yards in length.

At the top of the steep avalanche slopes there is a far more gentle, forested ridge continuing upward. Stay close to the rim of the canyon in order to keep on course. You will need to weave in and around some rock formations, but will not encounter anything more than a few feet in length requiring the use of hands. The forest becomes even more beautiful as it turns to Bristlecone Pines.

Mummy’s Toe appears ahead, peaking up behind a large hill in the foreground at the top of the slope. Just across the summit of this hill, hidden from sight, is the North Loop Trail. The hill is the highest point on that trail before it descends to the Fletcher Peak trail intersection and then to Raintree.

Take a left on the North Loop Trail, and then another left up to Fletcher Peak. On the way up the ridge to Fletcher Peak one can see 3 separate washes leading down into the Robbers Roost Canyon area. It’s not clear if these washes will allow one to continue all the way down to the trailhead on Deer Creek Road, or if there will be intervening cliff drop-offs blocking the way. There do not appear to be signs of human passage to be seen from above. If anyone has ascended to this ridge from the base of the canyon, it was so long ago that all signs have disappeared.

As for timing, it took about 4 hours to ascend from Robbers Roost up the canyon and to the summit of Fletcher Peak. The return trip on trails covered more distance, but took only an hour and 50 minutes. I estimate that a future trip on the same route would take about 2.5 – 3 hours up and 1.5 hours or less back. On this day I was slowed by trail finding, over an hour of video filming and recovery from a running injury that pretty much slowed me to a walk the whole way. 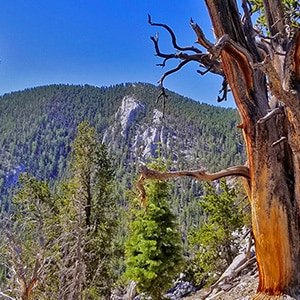 Article Name
Fletcher Peak from Robbers Roost | Spring Mountains, Nevada
Description
There is a little-known canyon between Robbers Roost and Fletcher Peak in the Mt. Charleston Wilderness of the Spring Mountains, Nevada. The canyon is bordered by majestic cliffs and is a climate zone unto itself populated by a forest at its base that in places grows up the solid cliff walls.
Author
David Smith
Publisher Name
LasVegasAreaTrails.com
Publisher Logo