The Calico Hills form a boarder between lower Red Rock Canyon and lower Calico Basin in Nevada. These ancient sand dunes have been frozen into an artistic display of fantastic shapes, colors and designs. From a distance the Calico Hills are dwarfed by the larger surrounding formations. However looks are very deceiving as the closer you get these formations become huge with 30-40ft sheer drop-offs. They’re actually a great playground for those who like to weave around amidst their maze of formations seeking the summit with its incredible view of both Red Rock Canyon and Calico Basin.

In addition, there’s Red Springs Desert Oasis at the base of the Calico Hills with its peaceful boardwalk–a great place for a nice walk with friends and family who may prefer this lighter but truly rewarding nature experience over more rugged adventures.

Route Up the Grand Staircase in the Calico Hills

Park at the Red Springs Desert Oasis parking area (primitive restrooms, nice picnic grounds available). Note that the parking area is gated off at sundown, so don’t be up on the hills at that time watching the gate shut your car in for the night!

As you look closely at the hills you’ll see a natural diagonal route that begins in the mid section and angles up to the right and to the summit of the hills. This is the Grand Staircase. On the weekend there are usually a number of hikers on the Grand Staircase so it’s harder to get lost. However, you’ll want to be looking back often to see how the route looks on the way down because believe me, heading down this route you’ll swear you’ve never seen the same formations before and it’s easy to stray and end up at a cliff edge, then retrace your steps only to end up at another cliff edge with no apparent way down!

Take a picnic and a few friends up to the summit and enjoy a nice peaceful time lying on the huge sandstone shelves with their incredible view.

The best time of year is in the Fall, Winter and Spring months on a clear day. Don’t try this in the rain because when the sandstone gets wet it becomes a skating rink…very dangerous! 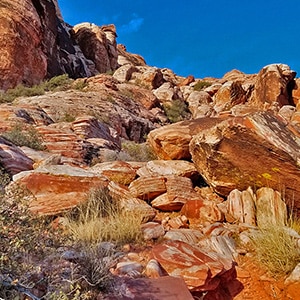