Damsel Peak first came to my attention as I was ascending the Southern Cliff Passage between the La Madre Mountains. Looking back down the Calico Basin and to the East there was this uniquely shaped peak. It created a beautiful crescent, so I began referring to it as Crescent Mountain until one of my video viewers gave me the correct name, Damsel Peak. I guess the peak looks like a damsel’s skirt? Damsel Peak it is! This definitely deserved to be on the summit list.

Views from the Summit of Damsel Peak

From the top of Damsel Peak one can see almost all of the Las Vegas Valley in the same way that Damsel Peak is visible from just about anywhere in Las Vegas Valley. In addition, there is an awesome view of the entire Calico Basin, Turtlehead Peak, the Calico Hills, Mt. Wilson, Rainbow Mountain, Juniper Peak, North Peak and Bridge Mountain and finally the huge expanse of the Keystone Thrust cliffs with La Madre Mountain as the high point. To the North one can see Gass Peak, the Sheep Range and Fossil Ridge. Damsel Peak has such a great perspective that it’s not possible to make an exhaustive list here of all the points of interest that can be viewed from the summit.

Length of the Damsel Peak Adventure

Note that this entire adventure requires more time and effort than the entire Mt. Charleston Loop. The Mt. Charleston Loop takes me about 7 1/2 hours and involves approximately 5000ft elevation gain and loss during that trip. Damsel Peak on this day took 9 hours and also involved 5000ft elevation gain and loss with a special little final 800ft climb over the back side of Turtlehead Peak near the end of the adventure when psychologically I felt I had already summited a mountain and therefore should expect a pure downhill journey on the return trip!

My first exploration of the Damsel Peak area was in the Spring of 2019, actually exploring a route around the East end of the Keystone Thrust to summit La Madre Mountain from the North side.  I returned in late February of 2020 to make a trip to the summit of Damsel Peak.

I imagine that there are other, perhaps closer, trailheads to Damsel Peak. However, I began at the Sandstone Quarry parking area in Red Rock Park (the Turtlehead Peak trailhead), as with the routes to the Southern and Eastern approaches of La Madre Mountain. This is the 3rd scenic parking area on the Redrock Park Scenic Drive. Other potential trailheads might include the upper end of Lake Mead Blvd or points on Shadow Hills Blvd. However, I don’t like to leave my car exposed for a day in an unofficial parking area just off a freeway exit (Lake Mead Blvd.) or in a less protected parking area (Shadow Hills Rd.). It’s also possible to begin from the lower Calico Basin where there is a trailhead to Turtlehead Peak.

Ascending from the Sandstone Quarry to the Upper Calico Basin, First View of Damsel Peak

From the Sandstone Quarry parking lot, head up the Red Rock Wash. You’ll be paralleling the Turtlehead Peak trail for a bit until that trail splits off to your right towards Turtlehead Peak. Continue up the Red Rock Wash, keeping to the left of the wash. Avoid the temptation of traveling up the right side of the wash because you’ll end up heading up a canyon that ends with a climb over what I call the Turtlehead Peak Saddle (actually the ridge between Red Rock Canyon and Calico Basin). This will add from 500 to 800ft unnecessary elevation gain to your trip along with eating up time navigating steep scree hillsides.

Rather, continue up the left side of Red Rock Wash. Eventually you’ll reach a point near the top of the Turtlehead Peak Saddle where a wash will split off to the right (pictured in the video on this page). Take the right split and you will continue to rise to an opening through the ridge between Red Rock Canyon and Calico Basin. You have now crossed over from Red Rock Canyon to Calico Basin without any climbing, therefore conserving your energy for the Damsel Peak summit climb. You’ll know you’ve reached the summit of the spine when Damsel Peak comes into view along with the Calico Basin and upper Calico Hills.

Descending Into the Caliso Basin and the Base of Damsel Peak

Now head down the wash angling to the right and down into Calico Basin. After about 1/4th to 1/2 mile the wash will break up and  you’ll be faced with a 10-20ft dry waterfall drop-off. Don’t descend down the drop-off, but rather angle to the left out of the wash and you will shortly arrive at an old unpaved road you can easily take down into Calico Basin without having to deal with the obstacles in the wash. After about 1/4 mile as the road begins to angle to the right and down toward the back side of Turtlehead Peak, angle left off the road and head toward the upper Calico Hills.

Ascending the Base of Damsel Peak

On this day I began my ascent up toward Damsel Peak at the top of the upper Calico Hills (white rock section). Hindsight says that the better route might be to descend to the point between the two calico hill formations, then take a left between the hills and on up the wash at the base of Damsel Peak. This is actually the way I returned after summiting Damsel Peak. The video describes that route.

However, on this day I began my ascent at the top of the Calico Hills, requiring ascent and descent through two canyons until I reached the wash at the base of Damsel Peak. I then took a left and began to ascend that wash. Again, hindsight tells me that I might have conserved a bit of energy by staying in that wash longer, but after a few hundred yards I took a right and began to ascend the base of Damsel Peak. It wasn’t too difficult, but did involve a lot of scrambling along the edge of some rather steep scree slopes. One thing I will say about my too early ascent out of the wash is that the views were much better than they would have been had I stayed in the wash longer. I could see the Calico Basin opening up beneath me and the point at which I began to rise above the elevation of Turtlehead Peak summit.

Angling Around the Left Side of the Damsel Peak Cliff

I angled around to the left of two rock formations, the final one of which was the left edge of the Damsel Peak cliff. Now and then while on these scree slopes I came across what looked like big horn sheep trails or the trails of previous climbers. These were helpful as they gave some relief from the steep scree slopes. Having said that, it’s important to say that during this entire adventure I was never once exposed to a potential fall. You just need to pick your way along the slopes and watch for the easier routes that do not involve exposure.

Reaching the Final Approach, and Then on to Damsel Peak Summit

A number of times I was about to turn around when faced with what looked like a huge traverse to the next hillside, but the thought of “What’s over that next rise?” kept me going forward. And, the distances were always shorter and easier than they seemed. Finally, over the last hillside the Las Vegas Valley came into spectacular view! I took a right and headed up the gradual final slope to the summit of Damsel Peak.

For the return trip, for the most part, I retraced my steps back down to the wash at the base of the Damsel Peak cliff. This time I headed down that wash all the way to the opening between the two calico hills formations in the upper Calico Basin. After passing between these formations I headed up the backside of Turtlehead Peak where I reconnected with the main Turtlehead Peak trail at the saddle area, then descended back to the Sandstone Quarry parking area. As noted, the entire adventure took about 9 hours. With what I know now, I might be able to cut one hour off the trip, but I don’t regret any part of the adventure as it was! Damsel Peak is well worth the effort! 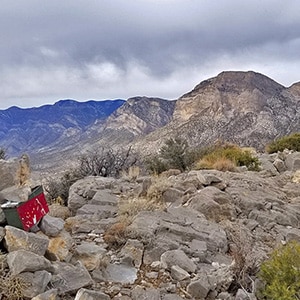